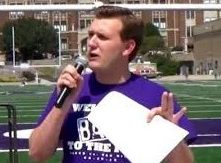 photo from twitter.com 2015-2016 student council president Jake Rinear delivering a speech to the student body during a pep rally

The school year is nearing a close and it’s time for the seniors to pass the torch to the juniors.  This year’s election brought many surprises and tight races.  Without further ado, here are the 2016-2017 leaders of Elder High School.

There was very little drama as Michael Groh ran unopposed.  Groh is known for his catchphrase “Groh Up”.  I asked Michael why he wanted to be the communications officer, “I thought it would be pretty cool having the whole school hear me every morning. I plan on playing Bruce Springsteen during the announcements.”

Michael also plans on incorporating jokes on Fridays.  “Plus the job includes perks like a nice parking spot and it looks good on a college résumé,” said Groh.   Get used to hearing a lot of Michael Groh over the course of the next year.

Lucas Downey won the secretary job in a landslide.  Lucas plans on elevating the Elder High School Student Council Twitter profile.  Downey planned on running for president, but it didn’t work out.  Lucas could’ve easily just given up, but did he give up? No, he picked himself up by the boot straps and took advantage of an opportunity to be a leader.  All eyes will be on the Elder High School Student Council Twitter account (@ElderSC1).  You can also follow Lucas’ personal Twitter account (@lucasdowney6).

Obviously, Connor Sullivan had hopes to be the president, but he didn’t let that discourage him.  Sully was known for using clever slogans such as “Better call Sull and I will fight for you” on many of his posters.  Connor has an extensive list of things he wants to help Elder accomplish,  “I want to make only the changes that are either necessary or that have gained popularity with the students,” said Sullivan.  “For example, competitive fundraisers, club fair day, and an increase in pep rallies are some events that will make getting involved at Elder a priority,” Connor added.  Even though he isn’t the president, Connor is still looking forward to making his senior year memorable.

The head honcho for next school year will be Roman Lee.  Roman’s catchphrases “Roman For Us” and “Like a good panther Roman is there” were littered on dozens of posters he placed around the school.  Roman received a vote from nearly every freshman student, which essentially locked up his bid.  Lee gave an inspiring speech about how he promised to care for every student.  I spoke with Roman about why he ran for president, “I wanted to run to be the face of Elder.  I want to represent a place that has given me the opportunity to rise above and strive higher for goals in life,” he said.  Roman also stated that he wants to collaborate with all grade levels to get their ideas.  Finally, “I want to guide, inspire, and excel the 95th class of Elder High School to new heights and make our last mark on Elder as great as possible,”  Lee added.  Roman has some big shoes to fill, but the student body is confident he will be a solid leader.

Good Luck to all of the newly elected leaders.  Everyone at Elder is confident that these young men will be great ambassadors for not just Elder, but also for the entire community.