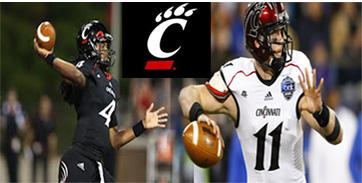 Last Saturday, the hometown Cincinnati Bearcats suffered a horrific 45-17 loss to the underdog Illinois Fighting Illini, but starting quarterback Munchie Legaux’s season ending leg injury is causing a lot of uncertainty around Cincinnati, as well as a lot of noise around the rest of the college football world.

With 9:28 left in the fourth quarter, Legaux attempted a pass to sophomore wide receiver Mekale McKay and was knocked to the ground by Illinois lineman Tim Kynard. He didn’t get up again. His teammates surrounded him for several minutes until he was carted off the field and, according to ESPN.com, transported to a nearby hospital in Champaign, where he remained overnight.

While the exact injury Legaux suffered is still unknown, even Dusty Baker is smart enough to guess that Legaux’s college career could very well be over. Head coach Tommy Tuberville announced the next day that Legaux would indeed be out for the remainder of his senior year.

Many of UC’s players couldn’t believe what they were seeing while surrounding Legaux before he was taken away. Legaux’s roommate and best friend, senior wide receiver Anthony McClung was quoted on cincinnati.com saying, “It was pretty devastating. I had to leave, I couldn’t continue to watch that. He was yelling and… I couldn’t do it”.

Senior linebacker Greg Blair, according to foxsportsohio.com said, “I didn’t even know what happened. I just heard the crowd go silent. I seen our players run over. I was probably one of the first people to run over and grab his hand. That automatically made me think of the Louisville basketball game and (Kevin Ware). That’s how his leg was.”

Teammates were still in disbelief even as he as being carried off the field, and it showed when they surrendered two more unanswered touchdowns to cap off the miserable afternoon.

There is at least a little upside in this whole mess, and that’s the fact that Legaux has a more than capable backup quarterback in Brendon Kay, a senior who Munchie just barely beat out for the starting job. Last season was Kay’s first time getting regular snaps, completing 63 percent of his passes for 10 touchdowns and just two picks. As someone who watches a lot of football, I personally think Kay is an Aaron Rodgers-like quarterback who is an accurate thrower capable of getting out of the pocket, throwing on the run and getting out of the pocket and running for first downs.  His numbers from last season don’t lie. Hopefully Kay can pick up where Munchie left off and salvage the season.

With any luck Munchie’s leg injury will just be a bump in the road to a successful BCS championship season, led by underdog Heisman trophy winner Brendon Kay, defeating Texas A&M and Johnny Foosball (no typo) in the BCS Championship game. Remember, you heard it first here in The Purple Quill.