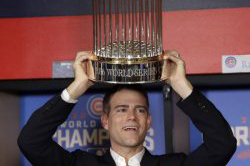 You know the story. After 108 years of heart ache and despair, the Chicago Cubs have finally fulfilled their destiny as World Champions.

After watching my own father cry after Rizzo squeezed the last out on the throw from Bryant, the magnitude of what had just happened began to set in.

“I’ve watched for the last 40 years as the Cubs came short time and time again,” said Andy. “To finally see them take home that beloved trophy as the best team in baseball is truly unbelievable.”

I could run down the list of players who made a serious impact for the Cubs this season like Kris Bryant, Anthony Rizzo, or Kyle Hendricks and I could tell you they have some of the best coaching in baseball, but the most prized asset to the Chicago Cubs has been Theo Epstein.

Theo was hired as the General Manager of the Boston Red Sox in 2002 at the age of 28. Over the course of two years, he assembled a team that broke the curse of the Bambino and ended an 86 year Championship drought. Many of those players would remain on the Red Sox to help add another two titles in following years.

After his first season, the Cubs were 20 games under .500, but Theo said not to worry and there was a plan in place. After picking out the weeds, He began building up the farm system with position players like Kris Bryant, Javier Baez, and Kyle Schwarber. Theo then began acquiring well-established big leaguers to his pitching staff such as Jon Lester, Jake Arrieta, and Trevor Cahill.

He then sprinkled off his World Series recipe by adding veteran Ben Zobrist and Cuban missile Aroldis Chapman.

All in all, Theo Epstein has solidified himself as one of the best front office executives that Major League Baseball has ever seen.

“Theo Epstein deserves a statue,” says my big brother Ryne Poli. “He literally has accomplished the impossible. Something that was simply believed could not happen. The best part is that this is only the tip of the iceberg.”

While players like Kris Bryant and Addison Russell have found their ways into being everyday starters, Kyle Schwarber and Javier Baez are still looking to find their way through.

Javy definitely proved himself to be worthy this postseason through dazzling web gems and clutch hitting, but Schwarber is still a question mark. He has shown over and over that he can hit, but I think his defensive ability is uncertain.

Either way, my brother Ryne is exactly right when he says this is the tip of the iceberg. Even with some of the most talented players trying to make their way as starters, Chicago still has two top 30 prospects in the minor leagues (21 year old Ian Haap from University of Cincinnati and 19 year old Eloy Jimenez from the Dominican Republic).

Who knows what is in for the Cubs’ future. Theo Epstein recently signed a five year extension. Most players are still coming into their own and other veterans looking to keep their place, this only means one thing: the rest of the National League is in trouble.

So from Cubs fan every where we say Thank you, Theo.