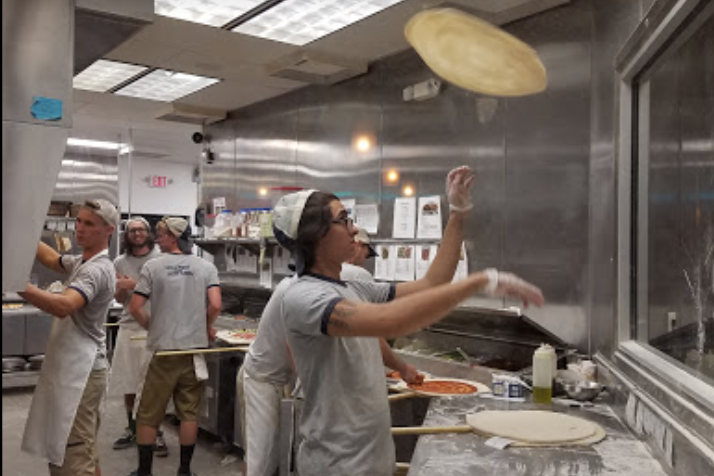 If you were to walk into Dewey’s pizza on Harrison Avenue on any given day, there is a very high chance that an Elder student would be working there. Since this past June, Elder students have flocked to Dewey’s pizza not only for the high pay and free pizza, but also because of the people.

The Panthers’ trend towards Harrison Greene all started last May, when Sam Catania, a junior, told me that he just applied to work at Dewey’s and that they started people off at $9.50 an hour. This intrigued me and caused me to fill out an application, and once returning from Wyoming, trying to get a job.

All servers and kitchen workers are required to pass a menu test, where the test taker must know all the ingredients on all the salads and pizzas. This can be a hard task but the reward is enough motivation for most.

The summer flew by and school started back up, and with school comes announcements. About three weeks into the school year, an announcement was made advertising for Dewey’s, and this started a new wave of applicants.

The third Panther to get hired was Josh “JP” Powell, a senior who decided on being a dish washer.

“I mean it’s hot, I’m always hot back there, the steam’s pumpin’, I’m sweaty, the dishes are hot, it’s wet, it’s dirty, it’s nasty, but I do get my own aux cord. Anytime I’m on shift, you come back to the dish wash area, it’s pretty lit, we get it bumpin’. But the best part about working there? Honestly though, the paychecks, the paychecks, 9.50 an hour? That’s solid cheese right there.”

Josh then talked about other aspects of his job that he liked and dislikes.

“Another great thing about workin’ there, free pizza on shift. Tell you what, get some white sauce, some barbecue sauce, smoked cheddar, mozzarella cheese, some chicken and some bacon, throw that in the oven then dip it in some ranch, best break ever.”

“Working at Dewey’s is a fantastic experience. I like giving the dough a little toss, throwing it in the air makes me feel so alive.”

Every worker at Dewey’s will tell you that there are some things they just don’t like doing, and for Michael that thing is making three specific pizzas.

“The Edgar Allan Poe is definitely the grossest thing I’ve ever had to make. I don’t know why anyone would even consider ordering it, it smells bad when it comes out of the oven and is not for my tastes. There is so much junk on the Socrates too, that one takes forever to make. Last and probably the least would have to be the Green Lantern, artichokes, goat cheese, and pesto, man I feel like people are just asking for it when they order that.”

Another trend perpetuated by the Panthers in the kitchen is Friday nights.

“No Panthers work on Friday nights, as a proud Panther I will NEVER work on a Friday night,” said Onorato.

Manager Ryan Cracchiolo, the man who hired all six of us, told me that he is really excited about all the Elder High School students that work for him now.

There are ups and downs to every job and in many cases the downs can cause students to quit. This, however is not the case for Elder’s Dewey’s workers.

Students won’t ever complain about having more money in their pockets, so Dewey’s is a perfect job for a lot of high schoolers. With a starting rate of $9.50 an hour, its hard to find a better paying job. If you’re looking for a good job with even better people, then Dewey’s pizza is the place for you.