A look into the future of Bearcat football 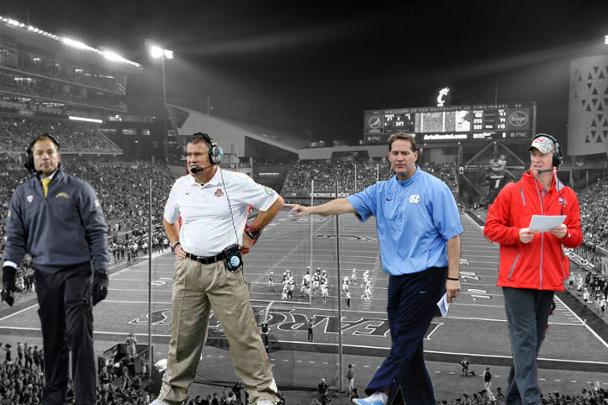 After another disappointing loss for the Cincinnati Bearcats, loyal fans have continued calling for head coach Tommy Tuberville to be fired immediately. Under Tuberville, these Bearcats have lost five of their last six games after a solid 3-1 start with the only loss coming from the Houston Cougars, the number six team in the country at the time.

This most recent loss comes a week after Tuberville was in the national spotlight for yelling back at a heckling fan in the stands after a rough 20-3 loss to the BYU Cougars at home. However, Mike Bohn, the athletic director at UC, defended Tuberville claiming he was in a “no-win situation” after the loss.

With the struggle that has come about this Cincinnati Football team, they fall to 4-6 on the year needing to win their final two games against Memphis and Tulsa to become bowl eligible. If they are unable to finish the season strong, the Bearcats will miss out on a bowl game for the first time in nearly a decade.In the three years with Tuberville at the helm, Cincinnati has lost their bowl games a combined 114-41.

In the past, the University of Cincinnati has been a breeding ground for young coaches to prove to the college world that they really know how to coach a football team. Before Tuberville, Cincinnati had a span of three coaches who now find themselves coaching some of the most prestigious school in the country with Mark Dantonio (at UC from 2004 – 2006, now at Michigan State), Brian Kelly (at UC from 2007 – 2009, now at Notre Dame), and Butch Jones (at UC from 2010 – 2012, now at Tennessee).

Now the roles have changed and the Bearcats need to start looking for a new coach to lead this team to new heights. Here’s a brief look at the candidates that could find themselves at Cincinnati next year.

In his first season as head coach, Fleck coached his team to a 1-11 record while even losing to Nicholls State of the FCS. However, Western Michigan trusted the young coach and now in his fourth year as the helm, the Broncos are looking to somehow crazy the College Football Playoff and stun the entire college football world.

At the age of 35, Fleck is one of the youngest head coaches in the nation but could be one of the most popular coaches for teams that are in a need of a new direction. After proving his ability to rebuild a program, I believe that Fleck could use his offensive mind to bring the Cincinnati Bearcats back to where they were with the offensive superstars of Tony Pike, Isiah Pead, and Mardy Gilyard.

Realistically, I see Fleck as somewhat of a stretch with big name schools like Texas and Notre Dame possibly looking for new head coaches.

After an outstanding 12-2 season last year at Western Kentucky, Jeff Brohm has been on the short list of several schools around the country looking for a new head coach.

In the three years at Western Kentucky, Brohm has a record of 28-10 with a bowl win in each of his first two years and will have a great shot at a third straight win this upcoming bowl season. Brohm and Western Kentucky have also been outstanding playing teams in their conference losing only one game in the past two years. Although it’s Conference USA, that’s still a very impressive statistic.

Brohm played quarterback for the Louisville Cardinals for five years as well as professionally for seven years with six different teams. With experience as a signal caller, I believe that Brohm would be able to help young quarterbacks Hayden Moore and Ross Trail develop into outstanding players.

In recent years, Ohio State has been one of the best offensive teams in the country with Warinner as Offensive Coordinator. In the famous Ohio State National Championship run in 2014, Warinner coached an offense lead by third-string quarterback Cardale Jones to a 59 point rout against Wisconsin in the Big Ten Championship Game, a 42 effort in the Playoff Semifinal against Alabama, and another 42 point game in the National Championship against Oregon.

Obviously, Warinner has the coaching ability to turn a struggling team around and the offensive mind to put points on the board which the Bearcats have struggled to do this season. Warinner was born and raised in the state of Ohio and knows the area well enough to bring home some solid recruits to play each week in Nippert Stadium.

However, with over 33 years of coaching experience, you have to question why Warinner hasn’t made the jump to a head coaching position yet and if he would do that with a program like the University of Cincinnati.

Although this may be a stretch to fill the head coaching position at Cincinnati, it’s worth a shot. Chizik is known as the coach of the Auburn Tigers during their 2010 National Championship run with Cam Newton winning the Heisman Trophy. Ironically, that occurred two years after Chizik was hired to replace former Auburn head coach, Tommy Tuberville.

Although Chizik’s National Championship is something that schools love to see in a football coach, Cincinnati has to decided whether they want another coach who is looking to bounce back and whose last game as a head coach was an awful 49-0 loss in a rivalry game.

Although the University of Cincinnati has yet to announce whether Tommy Tuberville will return to the program next year, by the way the Bearcats’ season is going, I would bet that one of these coaches will most likely be running the show at Cincinnati next year.