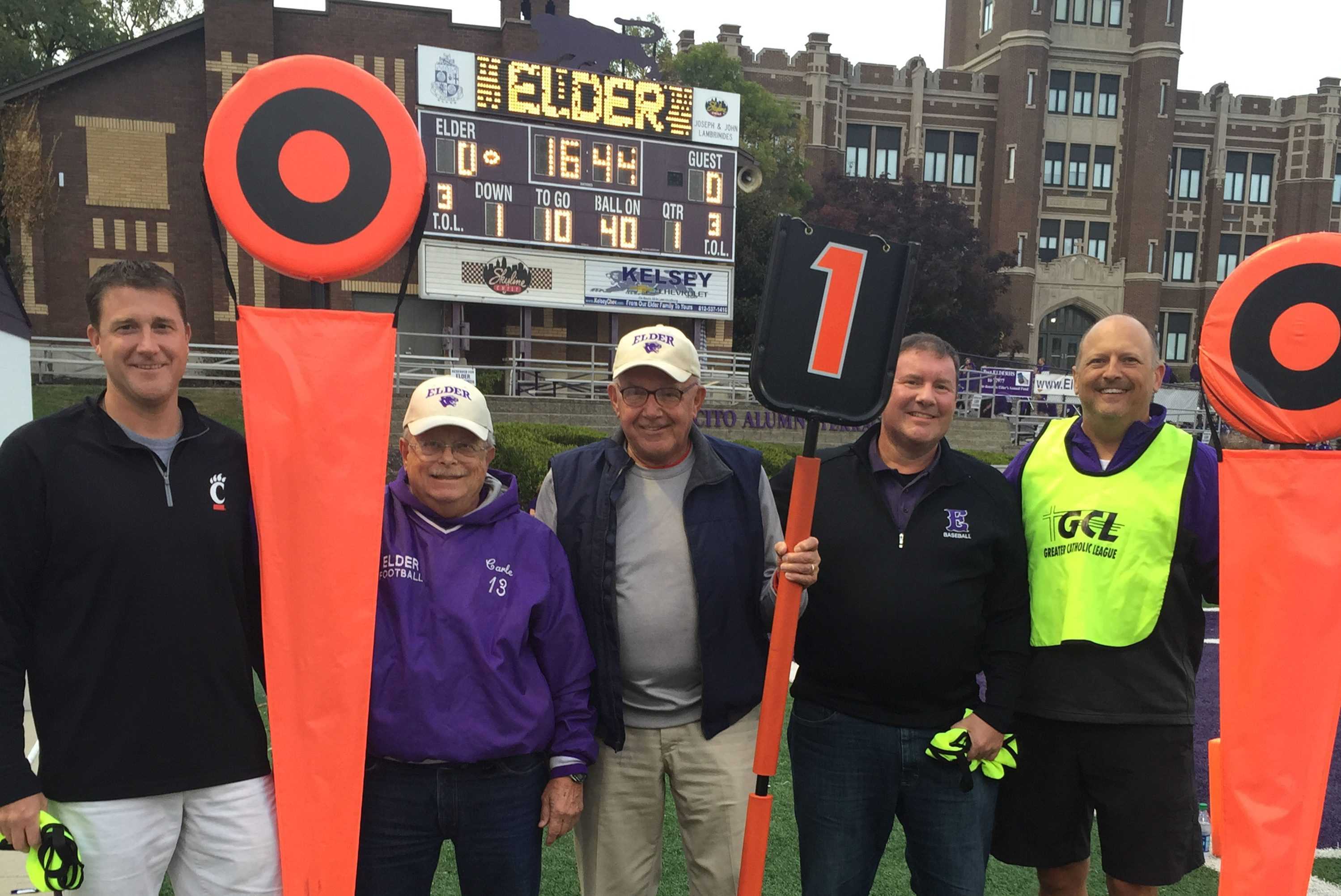 Elders chain crew gets a picture together before an Elder game. (Colleen Carle)

Elders chain crew gets a picture together before an Elder game.

200 Games on the CHAIN GANG

The story of Elder’s chain crew

August 27, 1983 was just another Saturday morning for Jerry Carle (Elder ’58).  Heading into The Pit after an early Pony football practice, he was settling in to watch the Panthers scrimmage when Coach Dan James asked if he could handle the chain duties.  He agreed, grabbed Ozzie Bowns and Joe Ventre, his Lourdes coaching buddies, and headed across the field.  Thirty four years, two hundred games, and a lot of Skyline later, Jerry Carle and the chain gang are still going.

Makeup of the gang

Jerry, a retired CG&E Project Manager and 42 year Lourdes football coach has been the head of the chain gang ever since that fateful Saturday. “We were asked by Danny James, who coached at Elder at the time, if we would like to do the chains this season. After that we have not missed a game. I took the job at first because my son JP, was a freshman manager for the football team. I planned on doing it those four years, and then I liked it so much I just couldn’t stop.”  In the early years, the chain crew never had set members. Jerry would fill the crew on a weekly basis with Oz, Joe, and coaches from the Lourdes football staff.

The first game they worked was September 2, 1983. The Panthers defeated West High by a score of 28- 17. Jerry can’t tell you much about those early games and who won, but he had some very interesting stories, “The first set of chains we used, had metal bars sticking out of the handles. One time, I was hustling to move the chains, and put the bar right in the coach’s ear. Later in the game, I saw the side of his face was bleeding where I hit him.” he said laughing. “Those sidelines are tight over there, you have to watch out chains coming through.”

Dick Bley (Elder ’58), a retired Cincinnati Assistant Health Commissioner and Mercy Hall of Fame member, spent close to 40 years coaching basketball at Mercy High School and was a regular on the chain crew from the beginning. Dick also was a basketball referee, so working on the chain crew was second nature to him.  “It was like looking at the game from a different perspective, seeing it up close, and I enjoyed watching the different coaching styles and organization.” Dick and Jerry started riding to games together, and after a couple of seasons Lew Lesko joined the carpool, the chain gang, and the post-game Skyline meal.  Just like that the “Elder Chain Gang” was set.

Every Friday night they were there, Jerry and Lew on the sticks and Dick on the box, a combination in The Pit as famous to Elder fans as Tinker to Evers to Chance for Cubs fans or Montana to Rice for 49er fans.  What most people don’t realize is that a high school chain gang is actually a four member team not three.  Jerry explained, “The fourth member, the clip, is a job for a young guy.  They bend down and place a clip on the chain every time we set the chains.  All that up and down can be difficult on older legs.”  That’s where the younger generation comes into play.  Jerry’s two sons, JP (Elder ’87) and Fuzz (Elder ’94) along with Dick’s three boys, Dan (Elder ’84), Tim (Elder ’86), and Rick (Elder ’91) rotate to fill that role. “It’s a great feeling to know I have people I can trust, and count on to be at every game.” Said Elder’s AD Dave Dabbelt. “It is one less thing I have to worry about on game nights. I only have to see them one time at the beginning of the year, and that’s it, they will handle the rest.”

They will often tell you that they get the best seats in the house, along with the occasional on field spotlight when a measurement is needed. “I love getting the chance to go out for a measurement, I can talk to some of the kids on the field that I may have coached in grade school.” Jerry said.

Some may think the job would be rough being on the opposing sideline, “It’s actually not bad at all, coaches are usually friendly most of the time, especially the GCL schools. Moeller in fact is the most well-mannered. They would say sir, and thank you and all that good stuff.” Jerry explained. He always remembers interactions he had with coaches during games, “When Kyle Koester was a Sophomore, Elder was playing a school from Boone County, and the coaches had no clue how to stop him. I looked at them and mentioned that he was only a sophomore, they look at me completely shocked and said, You got to be kidding me! We have to put up with two more years of this kid? It is something I will always laugh about.”

In 1992, Fuzz was playing his first season on varsity, and Jerry was excited for that first home game against Lakota West.  “This game was a memorable one for me.  I got to be standing on the field and see my son in an Elder uniform.” The following year, Jerry enjoyed senior night against Moeller. “While the outcome was not what we had hoped for, it brought a lot of pride to be a part of the same game and be on the same field.”

When 1999 came rolling around, the playoff format changed, Elder and the “Chain Gang” got to host Oak Hills in the first ever playoff game in The Pit.  Dan Bley remembers, “I was on the clip that night and The Pit was electric.  You could really feel the crowd on the sidelines.”  Elder defeated Oak Hills, 14-0.

The start of the 2001 season brought a milestone for the Chain Gang as they completed their 100th game, when the Panthers beat Cleveland Glenville 26-6.  Jerry remembers, “I didn’t realize it was our 100th game at the time but I do remember the Glenville coaches were all wearing a headsets, and it’s a challenging task to get around them and the cords, we yell as we come down the sidelines but they weren’t listening so I waited for him to walk across the chains, since he did it every play, and once he did I walked right over the headset cord with the chains and took off down the sideline.  It ripped the headset right off the coach’s head. He didn’t walk in front of us again the rest of the night.”

As a group young and old they all agree that best upgrade to The Pit happened in 2005 when Elder added field turf.  Rick Bley loved it, “Once the field turf was in the rainy games were no longer a big deal. Also the hash marks made it easier to set the chains and reduced the need for on field measurements.”

When asked to identify their favorite game Jerry and Dick agreed. “I really enjoyed the Independence game at Nippert when we broke their streak and I was in the celebration picture in the morning paper, however, my favorite game has to be the Sunday afternoon game against Colerain on ESPN. I had friends from all over calling me and telling me that they saw me on TV. I felt like I was famous.” explained Jerry.  Dick agreed, “That game was special definitely my favorite of all time.”

Over the years the chain gang has done games at various venues, such as Nippert Stadium and Paul Brown Stadium.  “The Nippert Games are always fun because we get to be on Elder’s sideline.  This year at the Pickerington game I was able to stand on the sideline with my son and that’s something I will always cherish, a very neat moment.” JP explained.  After Mt. St. Joseph started their football program the Elder Chain gang spent a few seasons on the Lions sideline.  Both the Cincinnati Swarm and the Cincinnati Marshals of the AFL2 and NIFL borrowed the Elder Chain Gang for their home games at the US Bank Arena. JP added, “Our dads could handle the college game, the game was faster but the sidelines were roomy.  Those Arena games though scared me.  A lot of running back and forth to set the chains and that’s not really the best environment for guys over 65.” But without a doubt their favorite environment has always been the friendly confines of The Pit.  The Winton Woods game, on Friday October 14, marked the Chain Gangs 200th game.

Jerry and Dick are getting older and the sidelines at The Pit are getting tighter.  It’s become a little more difficult to get up and down the sidelines every Friday, and they can’t drop the sticks as fast as they used to. They have handed off the weekly duties to their sons.   Jerry and Dick attend every game and still do a few games on the sticks for old time sake.  One that sticks out with Jerry was last year’s Oak Hills game, “I was so excited to be on the field for my oldest grandson’s first home game.  Not only was it his first home game but he took some snaps at quarterback in his first varsity game at Elder.  I waited 18 years for another family member to play, and it made me so happy that I could stand on the same field and share that moment with him.”  The sons have taken the responsibility with pride. JP, Fuzz, Dan, Rick and Tim all work together to ensure that the legacy of the Chain Gang lives on. “I always had the idea of eventually passing the job down to my sons, if they wanted it, and now that they are doing it, it makes me want to do it more, especially if I were physically able to do more games.” Jerry confirmed.  Dave Dabbelt appreciates what the crew has done over the years, and thinks it is awesome how they are passing the torch down to their sons, and the next generation to take over.

The Chain Gang, takes pride in what they do, and they will continue running the sidelines with the sticks for years to come. Through all the memories, of letting grandsons run up and help hold the markers for a few plays, to measurements, to knocking coaches down, to seeing their sons taking over, the old guys feel that they have done something truly special, the kind of thing that makes Elder High School special. It is a legacy that will be continued from generation to generation and make for great conversation at the post game Skyline dinner.