“The Game” takes a backseat to reality 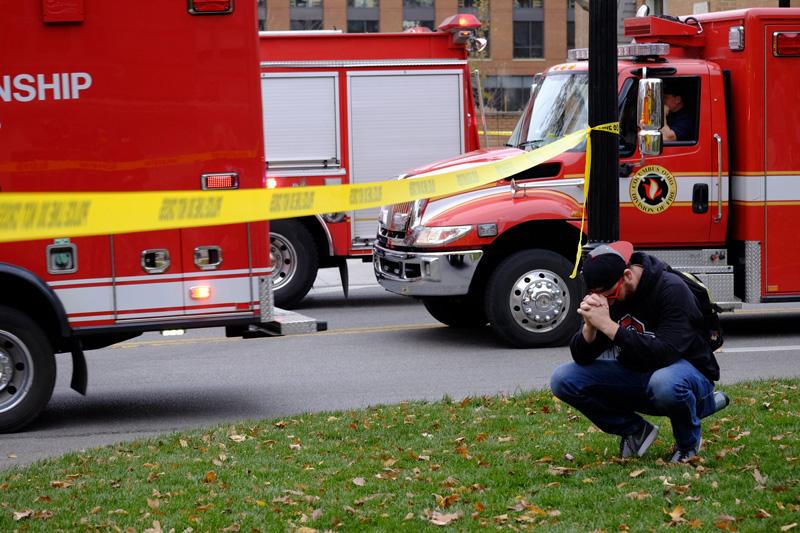 Ohio State and Michigan played arguably one of the best games in the history of the rivalry on November 26th.  One that will be a delightful remembrance for Ohio State fans and a bad memory for Michigan.

A double overtime thriller was needed to end this prime match-up of the second and third ranked college teams in the country.

In the end, Ohio State won the game on a touchdown run by standout Curtis Samuel.  The touchdown caused the fans to rush the field and cheer and yell in happiness.  They had just witnessed one of the greatest moments in Ohio State football history.

Parties after parties were thrown all weekend trying to relive what they witnessed on that magical day when they got yet another win over their arch rival Michigan.

After a weekend of celebrating the win, students had to return to classes  on November 28th when tragedy struck the campus.

A student of Ohio State, Abdul Razak Ali Artan, drove his car onto the campus and ran into a group of people standing on a sidewalk.  After hitting them, Abdul got out of the car and started chasing people with a knife and slashing them.

11 total people were injured during this horrific act, three of which are still in the hospital.  After failing to listen to orders, a local cop then shot and killed Abdul, but after the damage was done.

So after a weekend of rejoicing after a huge win, the campus was struck with a terrible tragedy.

Cops believe that the young man was inspired by Isis to do this terrible act.  Abdul was a Muslim, but was afraid to pray in public because of everything that has been going on with Muslims and the terrorist connections.

Ohio State police report that what motivated him was recent problems in Myanmar, a country in southern Asia, who were oppressing the Muslims.  Abdul notably said in a post on social media, “I can’t take it anymore,” before he started terrorizing the campus.

This news took the country by storm and everyone showed their support, even OSU’s arch rival, Michigan. 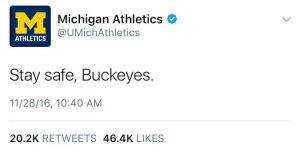 Life is more than just a sports rivalry. Putting away the hatred for each other and showing support gains instant respect by the Ohio State family.

Elder Alumni, Nathan Duke, attends The Ohio State University and explains how the campus has been after the attack.

“The atmosphere around school has been close to the same.  The night of the incident, everyone stayed inside and did not want to go out,” said Duke.

He also added that the next day of classes, everyone was very cautious walking to and from buildings and had their head on a swivel no matter where they went.

It is obvious the campus is still shaken by the event.  No school should have to go through something like this.

“It doesn’t make sense to me why anyone would want to harm innocent college students who are going to class and trying to make a difference in their lives. Acts like this one are selfish and sickening. There is no need for innocent young adults to be harmed because a person is mad or angry about something that is going on at the university or college,” said Mr. Quatman, an alumnus of Ohio State.

School is about opportunity and to get a good education for the future.  To think that someone is trying to end the experience and knowledge you have gained for a bright future and scary to think about. 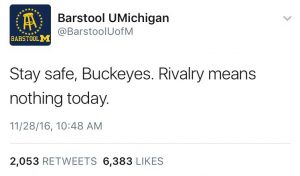 Is there anything that could be done to prevent these tragedies?

“I feel like it is hard to prevent things like these due to it being an idea in the persons head that no one knows or can expect.  There is only stopping it once it happens and try to stop it as quick as possible.  You can only stop it when it becomes reality,” said Duke.

Ohio State is still trying to process what has happened and trying to rebound.  It will take a while, but if there is any school that will be able to come back stronger, it is The Ohio State University.