Blockbusters head towards the box office in 2017

Could this be the greatest year in movie history? 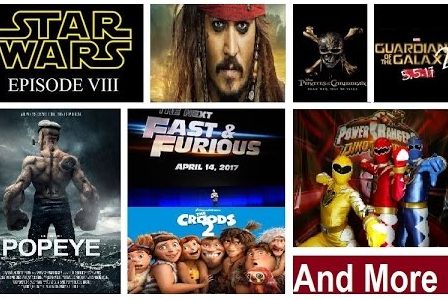 As 2016 came to close, the movie world was left impressed. With four Marvel movies and one DC movie, superheros were the hit for the year. These movies teamed up with Rogue One, remakes of Ghostbusters and Independence Day, and family friendly Disney movies to make the movie business another successful year. But with that being said, for as good as 2016 was…2017 will be that much better.

This year has the making to be the greatest cinematic year in history. The box office will have ample opportunities to real in the cash during the new year. When you have the eighth Star Wars, Fast and Furious Eight, Cars Three, lots of super hero movies, and much more, which means you will have a productive year of heading to the theaters.

The month of January will start the year slow. With the biggest movie being Monster Trucks the month itself will be a dud. Don’t worry though because out of the 12 months of the year, January will be the worst.

Like January, February will bring just a few headlines to the movie world. With the Batman Lego Movie, and other animated kid films, the shortest month of the year will not bring much excitement.

Is the first month we will see some exciting movies. With Kong: Skull Island, The Boss Baby, Beauty and the Beast, and of course, Power Rangers fans will be flocking to the theaters. It should be interesting to see how these remakes, animated films, and TV show movies will impact their fans interests.

With month starting with the release of the Smurfs, April gets a big film opening on April 14. The Fate of the Furious or Fast Eight, will bring many people to the theaters to see this iconic franchise movie. One movie that is going to fly under the radar until the release of the Lost City of Z. Overall April brings a nice jump start to wrap up the first third of the year.

May 5th, mark your calendars, because that is the day that Guardians of the Galaxy return in what they call Vol. 2. This will be a must see and is the first of a few Marvel films we will see in 2017. Other May films include Alien: Covenant, and a fan favorite Pirates of the Caribbean: Dead Men Tell No Tales. This will be a great month of movies, and will bring fans of all ages to the box office to see their favorite films.

The beginning of summer will keep you on the edge of your
seat. Wonder Woman strikes on the 2nd, and one week later The Mummy is released. Cars Three is then released on the sixteenth, and to wrap up the great month is Transformers: The Last Knight. This will be a great battle for who can control the top spot in the box office. Other notable movies in the month are Despicable Me Three, and World War Z Two.

Marvel will strike again, with the first release of the month. Spider-man: Homecoming, the reboot, could be the best series yet. With the cameo of Tony Stark, it could be a very successful movie. War of the Planet of the Apes is another top film in July. These two films should dominate the month of July, and is a great way to head into the second half of the year.

I stand corrected, August may be the worst month of them all. With only six releases in the month it looks like the past movies from July will continue to reign.

The Lego Ninjago Movie, is the best movie in September, so if you can see a pattern then you can tell these back to school months are terrible movie months.

October starts with a bang, with Kingsmen: The Golden Circle , and Bladerunner: 2049. These two films should give us enough excitement until we get into the holiday season, and back to some great movies.

With two top notch superhero movies, it will be a battle for the comics. Marvel will release Thor: Ragnarok, and DC will release a much anticipated Justice League. November will prove if the DC is finally back in the movie business.

What else is there to say about this month? Star Wars is back on the 15th, this will bring every young jedi to

see the return of Luke Skywalker. Other December movies are, Pitch Perfect Three, and Jumanji.

The whole year will have some great movies, and don’t forget there will be more movies added to the later months. It will most definitely be a year of movies to remember.