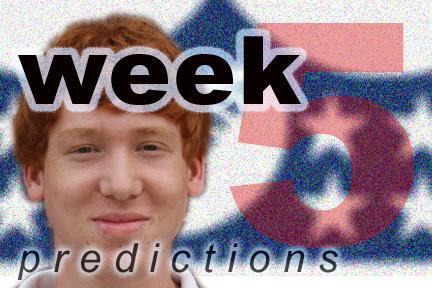 The NFL is unlike any sport. We have great matchups every week and the best teams face each other very often. This week’s slate is definitely worth watching.

Denver Broncos @ Dallas Cowboys: Tony Dungy said it best at halftime of the Sunday night game. The Dallas Cowboys play the defense often referred to as the “Tampa Two” under the father of that defense, Monte Kiffin. Kiffin was an assistant under Dungy for years when they were with Tampa Bay. When Dungy went to the Colts he used the “Tampa two” defense. That Means Peyton Manning practiced against that defense for years. “He knows that defense better than Kiffin does,” said Dungy. That’s not good for the Cowboys.

New York Jets @ Atlanta Falcons (Monday Night Game): Matt Ryan and the Atlanta Falcons rarely lose at home. They did lose last week at home to the Patriots, but the Jets are not the Patriots. Rookies tend to play worse on the road, especially in Atlanta where Matt Ryan is dominant. Expect Asante Samuel back and maybe even Steven Jackson for the Falcons. Roddy White said he is close to 100%, all those factors should lead to a Falcon blowout at home.

Jacksonville Jaguars @ St.Louis Rams: Jacksonville is the worst team in the league. After getting routed 35-3 by the Colts, Jacksonville head coach Gus Bradley said he saw “improvements” in incumbent QB Blaine Gabbert. That is probably because he can not get any worse. Their defense is just pitiful as well. They have allowed the third most points in the league (129). It’s not that the Rams are good because they aren’t. It’s that the Jags are a sinking ship and are just waiting for Teddy Bridgewater. Tebow Time?

Feeling confident but a little worried:

Buffalo Bills @ Cleveland Browns: (Thursday game) Cleveland has played very well since trading Trent Richardson (which was a great trade for the Browns by the way). They went to Minnesota and won a shootout against the Vikings and then came home and won a defensive battle against the Bengals. Cleveland is quietly tied for first in a very tight AFC North. This game is in Cleveland, so you have to expect rookie EJ Manuel to struggle on the road against the fourth best scoring defense in the NFL . But, then again EJ Manuel did just beat the defending champs.

Detroit Lions @ Green Bay Packers: The Packers had a bye week after a gut-wrenching loss to the Bengals a couple weeks ago. The Packers have been very good coming out of bye weeks in the Mike McCarthy era. Detroit has struggled mightily against the Packers in the last three years going 1-5, and have lost five straight. The Lions have not won in Green Bay in 20 years! And the only reason I can’t tell you the exact season is because ESPN only dates their schedules back to 1993. Expect Aaron Rodgers to have a big win. But, it will be close until Green Bay pulls away late.

Seattle Seahawks @ Indianapolis Colts: The Colts have looked extremely impressive the last couple weeks. They proved they can win a physical game when they dismantled the 49ers in San Francisco. But the Colts have struggled a little bit against running quarterbacks. Terrelle Pryor tore up the Colts defense in week 1, if that happens again Russell Wilson should have a field day. Seattle’s defense is the best in football, so that will make this very winnable for the Seahawks. I am worried about the Seahawks away from Seattle though. I don’t trust them on the road, but I  think Andrew Luck and the Colts just don’t have as good of a team.

Kansas City Chiefs @ Tennessee Titans: The Titans are one of the good surprises of the NFL. They have wins over the Colts, Jets, and Chargers. Not too bad, and they could easily be 4-0 but they lost to the Texans in OT in a bizarre game. Jake Locker got hurt, but Ryan Fitzpatrick is basically the same player. A tough QB, who is mobile and a solid passer. Not the same athlete, but he can get it done. I just don’t see the Chiefs getting to 5-0. The Chiefs’ defense is among the best in the NFL, but so is the Titan’s. Tennessee is 2-0 at home, so I think they’ll survive a close game by a field goal.

Baltimore Ravens @ Miami Dolphins: Baltimore has been up and down all season. They have been just horrible on the road. They got beat down in Denver then lost to the Bills in Buffalo. Joe Flacco, the league’s second highest paid player, threw five (yes, five!) interceptions last game. The Dolphins have played well at home this year, beating the Falcons a couple weeks ago. The Ravens will live and die by that defense. Ryan Tannehill always makes the Dolphins a scary pick, but I think Miami pulls away late.

Houston Texans @ San Francisco 49ers: The 49ers appear to have found their confidence again. Frank Gore is running wild, and the Niners are feeding him the ball. The Texans shutdown Marshawn Lynch last week, but the 49ers O-line is even better. The Joe Staley injury at the end of the game last week scares me, but Colin Kaepernick is back. I’m just not sure if the Texans can recover mentally from a Matt Schaub pick-six and a bad penalty that cost them the game last week against the Seahawks. No Aldon Smith again, but Patrick Willis and Nnamdi Asomough should return this week.

New Orleans Saints @ Chicago Bears: This will be a tough game for both teams. The Saints are never good away from the dome in New Orleans, but the Bears usually struggle against elite quarterbacks. The defense looked good early, but got shredded last week by Matthew Stafford. Meanwhile the Saints defense is much improved from last year. They have held all of their opponents to under 17 points. Granted that was against Arizona, Tampa Bay, Miami, and then Atlanta was in the Super Dome. This game will be close, but edge to the Saints offense.

New England Patriots @ Cincinnati Bengals: The Bengals looked awful last week against the Cleveland Browns. Andy Dalton looked confused as well. The Bengals have been good at home, beating the winless Steelers and pulling one out against the Packers. The Patriots are once again off to a great start. Rob Gronkowski and Danny Amendola will likely be back this week, which will make Tom Brady a very happy man. But, that Bengals defense is good. I think this one will come down to the wire.

Philadelphia Eagles @ New York Giants: This game is very close. Both of these teams have gotten off to slow starts. The Eagles have struggled mightily on defense this year. So, that should be good news for Eli Manning and company. That whole “Chip Kelly will revolutionize the NFL” stuff looks silly right now. But what happened to that once feared Giants pass rush? Justin Tuck and Jason Pierre-Paul have been complete non factors this year. This game could go either way.

Carolina Panthers @ Arizona Cardinals: Its been the good (38-0 victory over Giants), the bad (only 7 points at home in a loss to Seattle), and the ugly (horrible loss to the Bills after leading with a minute thirty left with Buffalo on their own 20) so far for the Panthers this year. But their rushing attack has been a bright spot. They are third in the NFL in rushing. Plus, the defense hasn’t been that bad either. Ranking in the top 12 in both passing and rushing yards allowed per game. They are coming off a bye week, so they should have had plenty of time to prepare for the horrific Carson Palmer lead offense in Arizona. The game is in Arizona, though. That means a long flight for the Panthers. Plus, they are going up against Patrick Peterson. This game could go either way, but its certainly an advantage for the Cardinals that this game is in Arizona.

San Diego Chargers @ Oakland Raiders: This game is tough for both teams. It’s a division rivalry between two teams with fairly  new head coaches. Interestingly enough they both came from division rival Denver. So they both know each others systems. Terrelle Pryor should be ready to go for Oakland. No Dwight Freeney for the Chargers, as he suffered a season ending injury last week. I can see this being an upset. The Chargers struggle on the road, and the Raiders’ head coach knows the Raiders’ system very well. But are the Raiders good enough to beat anybody other than Jacksonville?