Take a look back at music’s most iconic guitars

Before I rant on about guitars, here is why they have been on my mind ever since I saw the big news in music recently.

Kurt Cobain’s Martin D-18E has been at the center of a heated legal dispute. The guitar was given to his daughter, Frances Bean Cobain. Her ex-husband, Isaiah Silvia, claims that she gave him Kurt’s guitar when they were married. Cobain denies all allegations, and now they are going to court over the issue. That’s a lot of trouble for one guitar. Or is it?

The guitar was played by Kurt Cobain in Nirvana’s 1993 masterful MTV Unplugged performance which Rolling Stone listed as the 10th best live album of all time. It is believed that this was the last guitar Kurt played just before his suicide on April 5, 1994.

Vintage guitars can go for hundreds of thousands of dollars. When that old instrument was owned by a rock legend who formed the base of musical era, it can end up being worth millions.

The issue will be settled in court.

This guitar and other famous ones are not worth millions of dollars alone. Instead, their worth comes from what it helped produce, the person who played it, and lives and generations it affected.  It is a price someone is willing to pay while grasping at what once was and will never be again. Such instruments are aimless, yet alluring tokens of history.

Like Cobain’s guitar, there are many more precious pieces seen through the decades. So why not reminisce?

After Fender created the first substantially massed produced guitar, the Telecaster, in 1950, Gibson needed to step up.

Gibson President, Ted McCarty, factory Manager John Huis, and guitarists Les Paul came up with this model in 1952. Les Paul wanted the guitar to be flashy, so it was painted gold.

The model temporarily failed, and these guitars were not commercially sold from 1960 to 1968, and it rose to fame again in the 1970’s and has been at the top ever since. Despite the setback, it or to Fender Stratocaster are widely considered the best, most popular, and well known, guitars ever made. 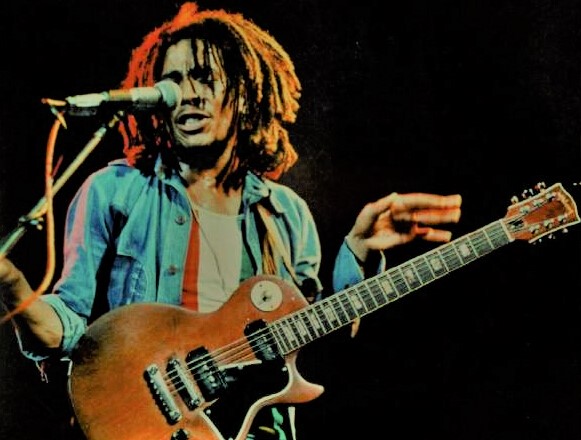 Dreadlocks flying, Wailers jamming, and Bob Marley rocking out on his 1957 Gibson Les Paul Special is a scene all music aficionados long to see. Marley may not have created reggae music, but most would argue that he is still a founding father of the genre.

Something about that natural mahogany body and the aluminum pick guard ironically scream out calmness, tranquility, and harmony – all things Marley sought to promote during his career. 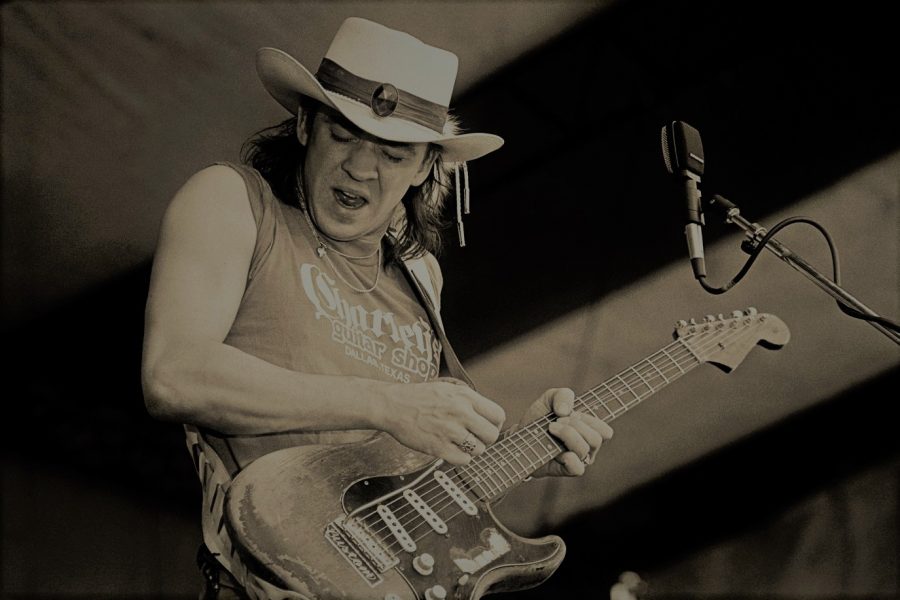 “I’ve always called her my first wife. And she don’t talk back to me, she talks for me. She don’t scream at me, she screams for me.”

Vaughn was the man behind the 80’s blues revival with songs like Change It and Pride and Joy. His guitar play was a masterpiece on its own, and his name is up there with Jimi Hendrix when we talk about the all times greats.

His “number one” was a beat up ’62 Strat with his initials on the pick guard; the finish was almost entirely worn off, but Vaughn still loved his Fender guitar which is just about as distinct as it gets. 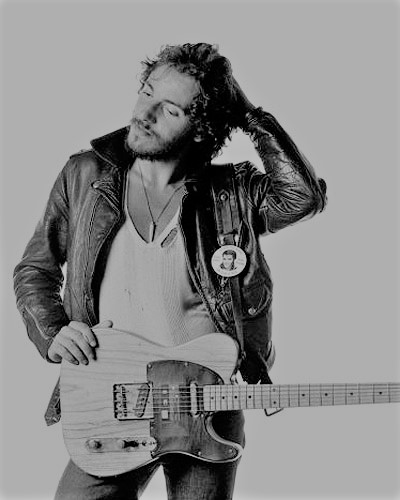 There has been a lot of debate as to when Springsteen’s guitar was made. He says it was made in ’53 or ’54. This is beside the point when we talk about how Bruce is one of the well known names in music history.

Springsteen’s guitar is worn and torn with a butterscotch blonde finish.

Most fans would first notice that this is the guitar Springsteen had on the cover of his 1975 Born to Run album which has been regarded as the best batch of songs in his extensive career.

Like a young man with a hungry heart, Bruce still plays this old Esquire 40 years later. 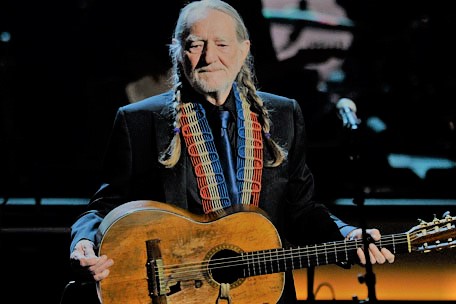 So far, every guitar we have talked about has been pretty rugged in one way or the other. Willie Nelson’s “Trigger” takes the cake for the most beat up instrument on this list with a giant chunk knocked out of the middle. It’s also been signed, carved into, and just worn down over the years.

Nelson’s warm sounding folk melodies have been played on ” Trigger” since 1969. This Martin guitar has become a staple of Willie Nelson’s laid back attitude and simplistic yet brilliant country tunes. 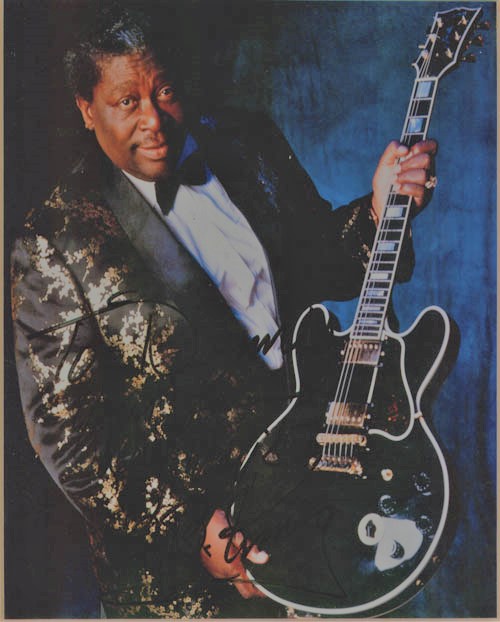 After rushing back into a burning dance hall to save his guitar in Twist, Arkansas back in 1949, King saved his Gibson. He went on to name her “Lucile” because the fire was reportedly started by two men who knocked over a barrel of kerosene after fighting over a girl with that name.

King risked his life, but created an unwavering legacy with his heroic guitar saving story. Also, he is one of the original and most well-known blues artist with work dating back to 1949.

He went on to name most of his guitars “Lucille” (often looking quite similar to the original) but none are as memorable as the that old Gibson from ’49. Leader of the band Van Halen, Eddie threw pieces from many different guitars together to form this monster of an instrument – it’s red body with black and white stripes creates quite a sight.

Van Halen was a quintessential 1970’s hard rock band known for exhilarating guitar work with lavish stage performances that eventually bled over to the 80’s.

The Frankenstrat is behind some of rock’s most memorable and catchy songs such as Jump and Panama. This crazy guitar is a a perfect symbol of the wild band that was Van Halen. 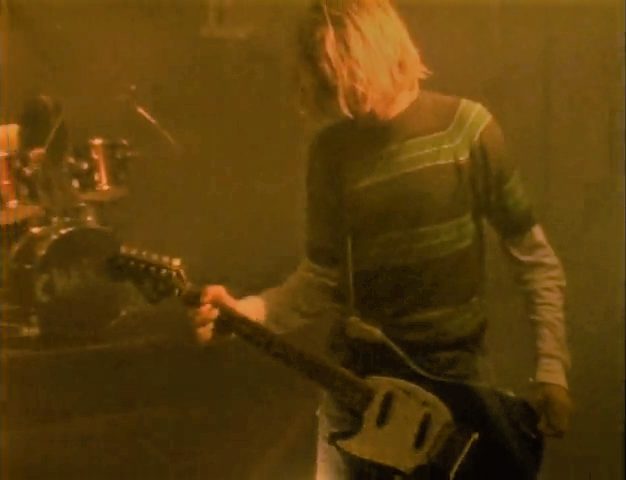 Rock music was starting to find its way to the door before Kurt Cobain and Nirvana strolled in. Not only did they revive rock music, the band created its own sub-genre: grunge.

Cobain played this lake placid blue guitar for much of the production and recording of Nirvana’s break through album Nevermind which is listed at number 17 on Rolling Stones top 500 albums of all time.

He also played the guitar in the music video for Smells like Teen Spirit which Rolling Stone listed as the ninth best song of all time.

Ironically enough, this Mustang was never meant to be played by hard rockers. Still, Cobain twisted the standard, something he was not unfamiliar with, and changed the the course of music history. 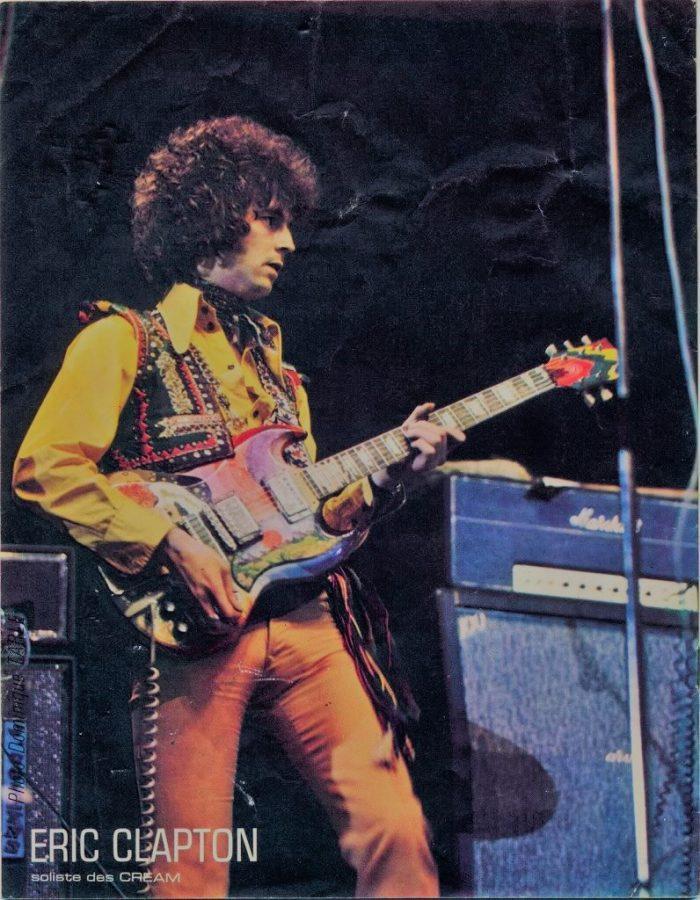 Being considered one of the best (some would argue thee best) guitarist of all time, Clapton’s instruments, no matter how elaborate or simple, are some of the most recognizable guitars to date.

He played a vibrantly painted Gibson “SG” (solid body) guitar during most of his time with Cream. Playing for only a short time in 1966 to 1968, Cream and Clapton’s guitar were true symbols of the psychedelic 60’s.

After Clapton went on his own in the late 1960’s and into the 70’s, he switched to the Fender Stratocaster because it was the model that the best of the best played – like Jimi Hendrix.

“Blackie” was made after Clapton bought six 1956 and 1957 Stratocasters from a Nashville guitar store.   He had someone take them apart, took the best parts from three of them, and made his own Strat. It’s first public sighting was on stage at the Rainbow Concert in 1973. This became Clapton’s favorite guitar and remained with him until its retirement in 1985 after the guitar’s neck began to wither. 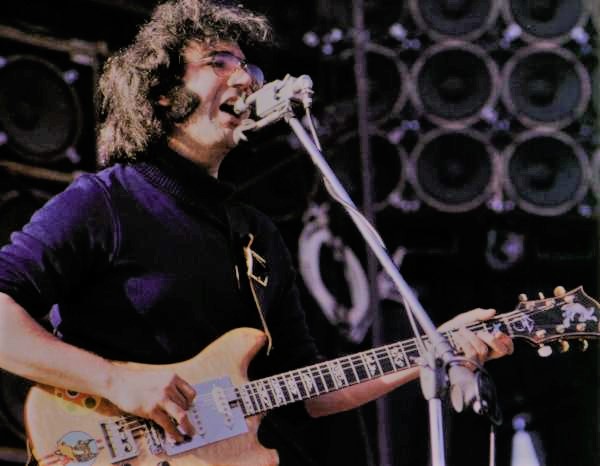 Like his music, Garcia’s guitars were odd yet fantastic.

The Grateful Dead, led by Garcia, was a product of the hippie movement out in California. In 1965, his band played at the acid test parties to study the affects of drug before it was illegal. Obviously, the tests were more for the party than for the scientific studies, but the hippies gave us some great tunes like the smooth jams of the Grateful Dead.

At the start, Garcia played a natural Strat with an alligator sticker during the bands early days and until 1973.

He later got in contact with guitar maker Doug Irwin who created “Wolf” which Garcia jammed on from 1973 to 1993 – he would have been playing this one during the band’s prime in the 70’s.

However, his favorite guitar was “Tiger.”  Irwin also made this one, and it was known as a “hippie sandwich” since Irwin smashed many different woods together to make this one of a kind masterpiece. It was played from 1979 up until Garcia’s death in 1995. 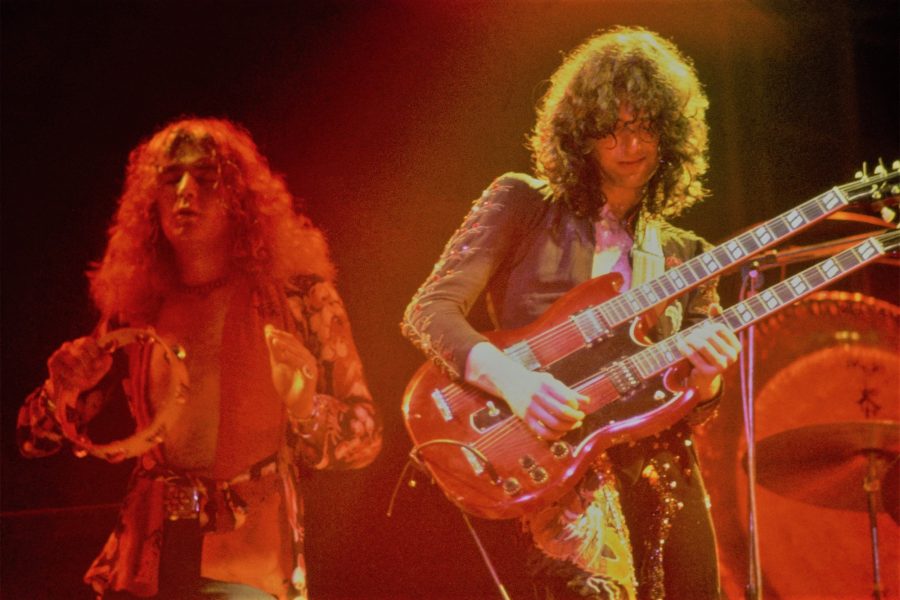 Led Zeppelin, formed in 1968, helped pioneer the transition from the trippy tunes of the late 60’s to the hard rock days of the 1970’s. Page was the man behind the sound of music’s most memorable guitar riffs like the one heard in Whole Lotta Love. This double necked, SG styled guitar is the most distinct instrument on the list.

With 12 strings on the top neck and six on the bottom this made elaborate songs like the Stairway to Heaven possible to be played live. Although Page’s primary instrument was a Gibson Les Paul Standard, this guitar is synonymous with Page and Zeppelin – arguably the best band of the decade. 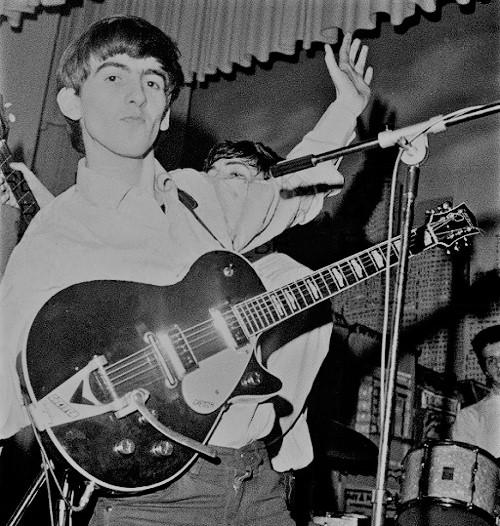 Back when the Beatles were just playing in caverns around Liverpool, Harrison was playing the Gretsch Duo Jet – an American made guitar. For him and the Beatles, American made guitars “looked sensational.”  The Duo Jet was in his hands during the Please Please Me days (their first studio album). Through Harrison, Gretsch was put on the map.

His 12-string Rickenbacker was given to him by the company before their first U.S. tour in 1964. Harrison loved it, and it is the instrument behind the famous chord to begin a Hard Day’s Night. John Lennon also played a Rickenbacker for the first five years of the Beatles tenure giving the company a sacred spot in music history.

Harrison (and Lennon) both went onto to play a light blue Fender Stratocaster like many of the best guitarists of that time. Although Harrison was rarely, if ever, seen playing this guitar live since the Beatles ended touring in 1966, it is the sound behind much of the Beatles’ later work. The guitars were purchased in 1965 and Harrison can be heard playing it Rubber Soul, Revolver, Sgt. Pepper’s Lonely Hearts Club Band, Magical Mystery Tour, and The Beatles (White Album). After the release of Sgt. Pepper’s in 1967, Harrison gave it an abstract paint job representative of late 60’s psychedelia. 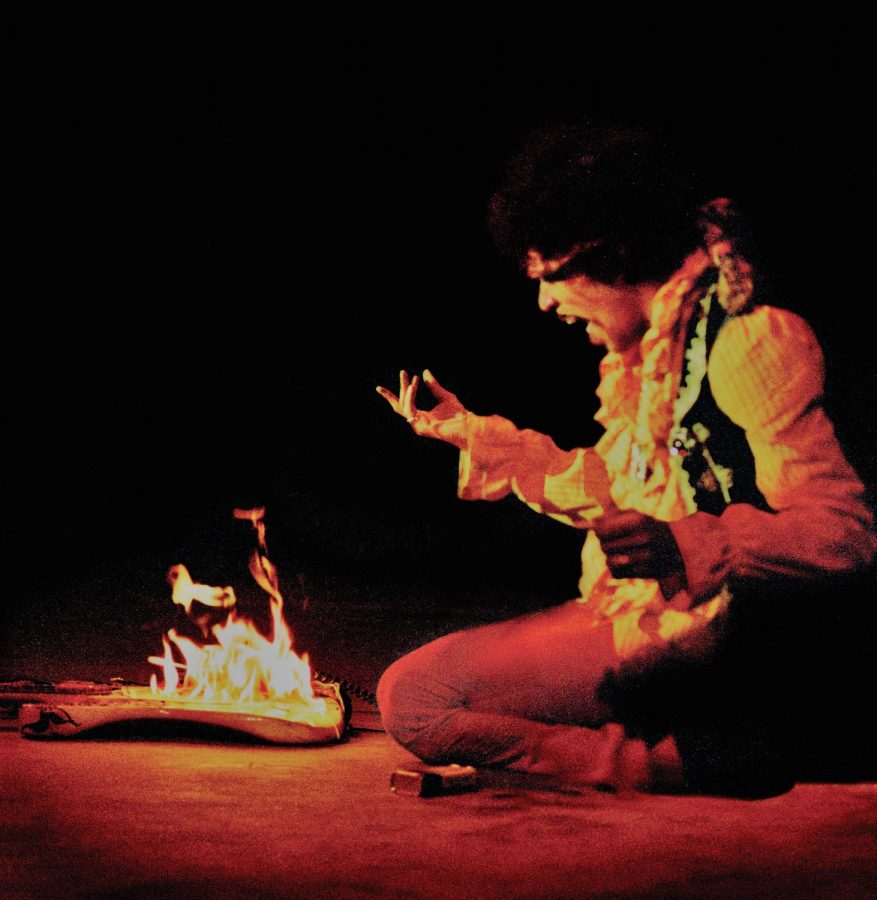 No one utilized the guitar like Hendrix. He could simultaneously get a blues, R&B, and hard rock sound out of his guitar – he was in his own dimension back in those days.

Hendrix is known for playing a variety of Strats during his short musical career after passing away at the age of 27 in 1970.

People remember him for his animated stage antics such as playing the guitar with his teeth or by shredding while down on his knees.  His most iconic stunt came during the Monterey Pop Festival in California. At the end of one of his songs, Hendrix threw his fiesta red Strat with floral decals down onto the stage, grabbed a match and a  some lighter fluid, and set the instrument a blaze before smashing it to pieces. He did the same stunt earlier in 1967 in Astoria, London (without smashing it) and gave the remains to guitarists Frank Zappa.

An olympic white Strat was with Hendrix until his final days, and it is believed to be is favorite guitar. Hendrix modified  it by reversing the order of the strings to get more bend creating that divine sound which made him famous. The most notable performance with this guitar came at Woodstock, the height of the counterculture movement, back in ’69.