New babies in the building

Numerous faculty members at Elder experience the excitement and struggles of becoming a new parent. 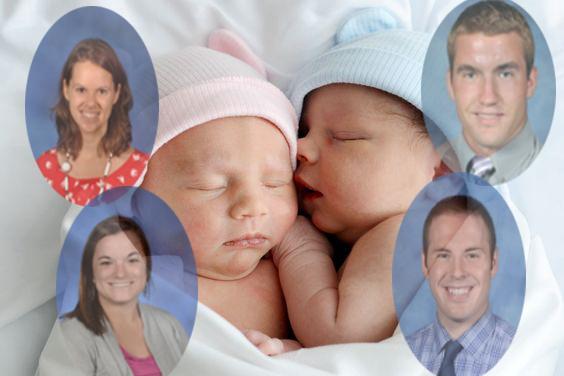 There must be something in the air recently this year at Elder. New life has been blossoming through the faculty and staff left and right. The new door of parenthood has opened up to several faculty members including Mr. Grimm, Mrs. Corwell, Mr. Currin, Mrs. Kinross, and Mrs. Lind.

Becoming a parent significantly changes one’s life in a multitude of ways. One aspect parenthood affects is the work life. This is never more visible than at Elder school.

It feels like every other week you realize another one of your teachers is either pregnant, the spouse of someone pregnant, or a new parent. The synchronization of pregnancies taking place is almost uncanny.

The only currently pregnant faculty member at Elder is one of our Spanish teachers, Mrs. Corwell. She has been powering though every day of the school year from day one.

While raising a new born and teaching at the same time is a difficult task, literally being pregnant while working is a whole other atmosphere. However, Mrs. Corwell is as spirited and cheerful as ever. She mentioned the main difference in teaching while pregnant was, understandably, she has to spend more time sitting.

Becoming a new mother is an extremely exciting accomplishment as well. Mrs. Corwell claims, “I am most excited about watching the development of my daughter, and watch God’s creation develop in front of me.” Yes you read that correctly, DAUGHTER!

Mrs. Corwell has not revealed the gender of her baby to any of her students until now. Whether a name for her girl has been 100% decided upon unknown to us, although she mentioned there is a top contender.

She also had some expert advice for any future or current pregnant teachers. Mrs. Corwell advises, “Get first bell off and no home room.”

One of the several teachers included in this circle of parenthood is English teacher Mr. Grimm. He recently became the father of a newborn girl. When asked what his daughters name is he responded, “Daisy Huckleberry Grimm, also known as Rowan.” I guess his love for American literature carried into naming his child just a bit.

Mr. Grimm’s sound advice for other teachers becoming new parents include getting the baby on a good sleeping pattern, and reading them classic Literature such as The Great Gatsby.

Mrs. Lind, Elder’s collegiate coordinator, also just had a girl named Ellie. She says the one of the only struggles she noticeably has after her pregnancy is balance. Mrs. Lind humorously mentioned, “After carrying around another human for so many months, it’s not so easy to transition back to normal.”

When I asked her what her tips were for currently pregnant employees, she responded, “Get lots of sleep whenever you can. Enjoy every moment you can, and take lots of pictures. It’s important to know that when things are frustrating and aggravating you have to remember it is all worth it in the end.

The final teacher I reached was Mr. Currin. Along with Mr. Grimm, he has just become a dad, but his new child is a boy. His new boy’s name is Caden Edward Currin, the future Albert Einstein.

Along with most of the teachers interviewed, Mr. Currin had a reasonably laid back approach when it comes to his stress levels. When asked what the hardest part about being a new parent, he responded,”It really hasn’t been too difficult yet… It will probably get harder.”

His favorite part of being a new dad is, “Seeing him (his son) develop more and more and seeing him learn new little things every day.” Along with the other teachers, he also contributed words of wisdom stating, “Try to enjoy the times that seem hard, and always pray for patience.”

Speaking on behalf myself and the rest of my fellow students here at Elder, we wish the best of luck to all of the parents or soon to be new parents among the Elder family.