Anticipation for life after season at an all time high

My Elder wrestling career is almost over and I can't believe it. 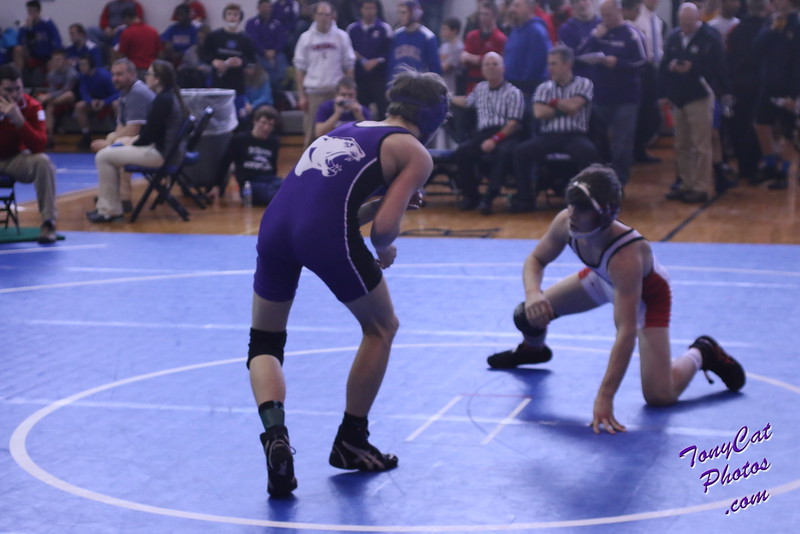 Rocco Salamone, before he was defeated by LaSalle's Cory Shie

In all of sports here at Elder High School, none compare to the long and grueling season such as wrestling. From early November to early March, nearly five months of non-stop work daily starts to take a beating on you mentally and physically.

Every day, it’s the same routine. Get dressed and come up at 3:15 and it’s go time. For the next couple hours, you’re put through a workout that make you question why you’re even here. You must learn to push yourself and stay focused. But for five months? Who wouldn’t be excited for it to come to an end?

Every wrestler will say the same thing with a huge grin on their face while thinking about this; when will the season be over? We all count down the days. I personally have a calendar of this wrestling season on my dresser crossing the days and tournaments off as we go on. If someone was to tell me it’d be over in a blink of an eye, I wouldn’t believe them. But here we are, the final week of the season for those worthy enough to make it all the way to the State Tournament.

District week has just passed and Elder is sending seven wrestlers to the Schottenstein Center in Columbus. Many expected more, and some expected less, but we as a team knew where we stood. For the other seven wrestlers that will not be making the trip up north, their season has come to an end and it’s bittersweet for one more than any other.

Senior, 132 lb. starter Nino Salamone gives his take on what was more of an “embarrassment” performance at districts. “My entire life all I wanted was to be the first Salamone with his name on the big board but it just didn’t happen,” Nino said. “I know I was worthy of making it to state this year and so does everyone, but a decisive weight cut and being not completely focused in caused me to have my dream slip away.”

Nino was a three-year starter and had a very decorated career here, but now that it’s over for him he’s certainly enjoying these times eating and gaining his 20+ pounds back. In a discussion last week with Nino, we spoke about what life will be after this season is done and we couldn’t be more anxious for it to be over. No more coming home at 6 o’clock, no more cutting weight, no more tears, no more blood, but the time will come when we all miss it.

The season cuts any personal time out of the picture. You’re into this sport 100% and the time for any activities is gone. The worst part for any wrestler comes along the time of Thanksgiving and Christmas.

These are times that are meant to be spent with family, and eating, and enjoying all of it. But not for wrestlers, it’s a time of extreme discipline and starving in order to make weight. It’s something you hate at the time, but when looking back on old pictures and memories, it’s something you’re glad you stuck with. Times were hardest when Nino, and Jake Meredith and I had to run with the propane heater blowing hot air on us while running on the treadmill. I will never wish for anybody to go through that, but doing it with teammates you’ve become so close with, all you can do is laugh and look back on those times.

It’s that point of the season where you have to be ready at all moments of the match. This week is most important but when it’s over, I will feel like a new person being born. Senior Jake Meredith can say the same thing.

“I’m pumped for it to be done, because I can eat whatever I want, drink whatever I want, and get back to hitting the parks and downtown with my bike and friends at any time. There’s no more practices, tournaments, and weight cutting, which I can’t even put to words how happy I am.”

I lastly will put my input into this whole idea. This has been my first season healthy in a long time and I’m sad to see it come to an end. Even though I’ll continue wrestling for four more years, the fact that my whole high school career being over in a couple days is incomprehensible. Time doesn’t slow down for anyone and I’ll just have to go along for the ride. But on the other hand, I can’t wait to go home at 2:30, maybe stop on the way home and grab a bite to eat simply because I can, and whatever I want to do now, I can! I’m excited to go back to work, knowing that I don’t have practice every day and my job sucks so that’s saying something.

My plans for the next three weeks following the conclusion of the season is quite remarkable, and all I’m worried about is how I’m going to do all these activities in one day. It’s a big ball of emotions currently, because I don’t want my high school career to end, but knowing I’m getting my normal life back will make me the happiest I’ve ever been.