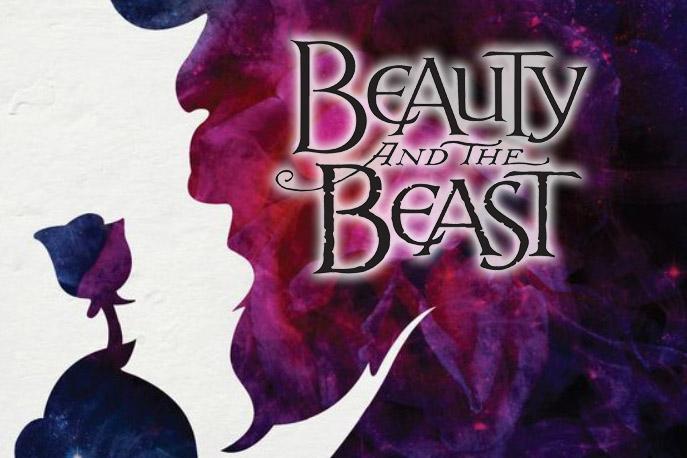 Beauty and the Beast was released by Disney in 1991, and was an instant success. This animated fairy tale was unlike any other at this time with its unusual story line and is considered to be one of the most romantic love stories of all time.

Recently its story has had a light shone on it by Hollywood once again. Bill Condon directed a live action adaption of Beauty and the Beast, and it has been one of the most anticipated movies of the year.

Beauty and the Beast’s fan base is one of the most passionate around, so when it came out that they would need to find a real woman to portray Belle, they seemed a bit on edge. Belle is one of the more beloved princesses ever written about, Senior Makenzie Ruff added, “I have learned a lot from Belle. She has taught me that my happily ever after may not look like one right away, and that’s okay. Belle has also taught me not to allow fear get in the way of new experiences and the importance of being yourself and staying true to who you are.” Too many, it seemed unlikely that any actress would be capable of embodying such an iconic role; nonetheless, Emma Watson was honored to accept.

“I’m a little skeptical, particularly of Emma Watson as Belle. It will be interesting to see how she does, performing in a musical movie is very different from acting.” Andrew White and many other Beauty and the Beast fans said, while others wholeheartedly agree with the decision.

Makenzie Ruff gave her perspective  on the matter saying, “I think Emma Watson is an amazing actress,

but an even better person. She is the type of performer that isn’t worried about the “what” she is, but would rather focus on the “who” she is. I think this is a main reason why Watson was casted as Belle. Belle is the type of person who will not risk losing her beliefs in order to feel accepted and I believe Watson possesses the same mentality. Both Watson and Belle are strong, resilient women and I can’t wait to see what Watson does with the role.”

When Makenzie was offered the role of Belle, she was more than excited to accept. When asked if she had always been a Belle fan she responded saying, “Of course! How could anyone not be a huge fan of Belle? Belle has always been one of my favorite Disney Princesses, if not my favorite because Belle isn’t just a Princess. She is the true heroine of the story. Unlike most princesses who possess a “damsel-in-distress” quality, Belle is the one who saves the Beast.”

Emma Watson was offered the role of a Disney Princess just a couple of years prior for the 2015 adaptation of Cinderella. She rejected the offer to be Cinderella; however, she seemed much more interested in being Belle when discussi

ng the role with Bill Condon. She did have a few concerns with the script, but overall she saw Belle as a great character for her as they both emphasize education in their lives against the wishes of many.

Beauty and the Beast was released March 17, 2017, almost 26 years after its original November 22, 1991 release date. Many fans have been a mix of excited and nervous for this new release because they really want the live action film to do justice to this amazing story.

Maybe even more awaited, the Elder and Seton theater department has been working on making this story into our next unbelievable high school play. This came with “not as much [controversy] as usual. There are always going to be some disappointments and a few shockers, but as far as I am concerned I am not surprised. A big thing was two sophomores got two of the main parts, which is usually pretty rare. But they are both very talented and certainly deserve it.” said Andrew White. 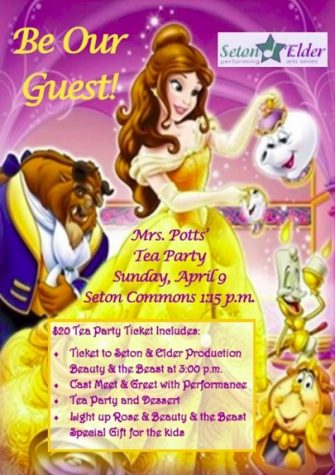 Our high school production has some of the highest expectations to live up to; Elder and Seton have set the bar high with past performances, and Beauty and the Beast is no easy task. The cast told me thepractices are most days of the week, and with opening night fast approaching we’ll be rehearsing pretty much every day, and each rehearsal runs for about an hour and a half or 2 hours.

The cast and crew for this rendition has worked tirelessly to get ready for its first showing in early April, the shows run in Seton’s auditorium April 5th, 7th, 8th and the 9th. “Practices definitely get more tense as the show gets closer, but sometimes that’s not the case.  If there’s something we just can’t get down, the stress is through the roof.  But with practice we can usually start to perfect everything, and in those cases the practices are still tense but it’s not too terrible.” Paxton admitted. But with months of practice under their belt, they are not nervous, Andrew White was confident in saying “I feel that our cast is very talented, and the show will be excellent.”

Some of the stars of the show include: Senior Andrew White as the Beast, senior Makenzie Ruff as Belle, sophomore Zac Martin as Lumiere, junior Tom Sunderhaus as Cogsworth, senior Paxton Kelley as Gaston, senior Elliot as Lefou, and sophomore Rachel Meyer as Mrs. Potts.

“The chemistry in this cast is unlike anything I’ve experienced over the past 4 years of doing the musicals. It’s an awesome group of people.” Paxton Kelley told me.  “We’ve all grown really close to each other through the shows and doing things together as a group.”

This staff seems to be having a blast, which is hopefully an indicator of how the play will go in April. Every cast member I have spoken to seems happily surprised by the chemistry on and off the stage shown by these talented individuals.

Actual relationships among the actors and actresses are crucial to the realness of the scenes, Makenzie went as far as to say, “This cast is unlike any cast I’ve ever worked with before. The comradery amongst the cast is incredible and I know our audiences will undoubtedly recognize the bonds and friendships our cast has formed along this journey.”

Another interesting aspect of this play is seeing the students really get into their roles; they all get so passionate in discussing their characters. Paxton Kelley even said that just being in his role is his most fun part of the show, “I think for this show the best part has been getting to understand and really become the character.  I play Gaston, the big pretty boy, meat head, jerk that tries to get the girl, so getting to act like that has been pretty entertaining.” Paxton said.

The cast is very excited for the show, and cannot wait for everyone to see the magic come together! Show is April 5, 7, 8, and 9th!