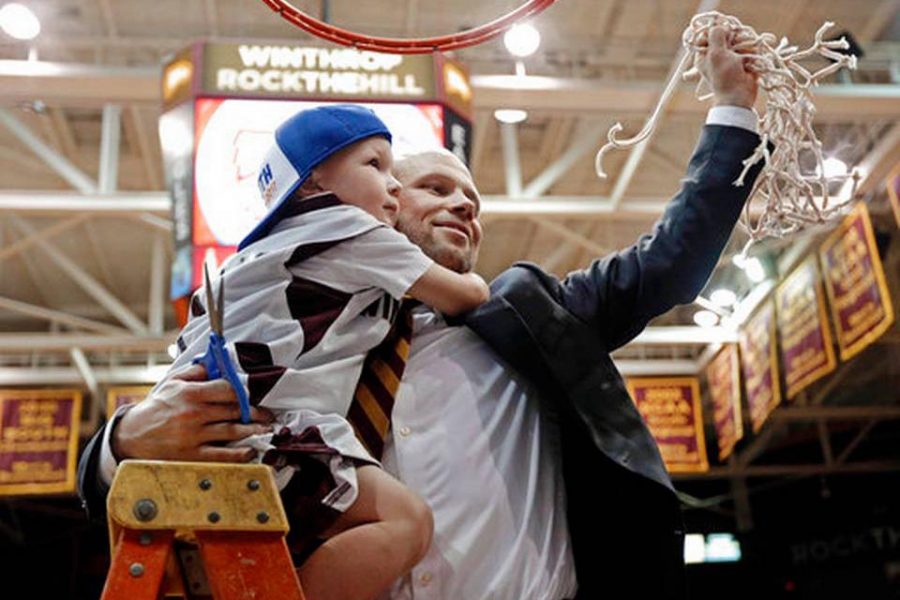 Coach Kelsey and son Johnny Ballgame cut down the net

Pat Kelsey, a 1993 state champion, has been a basketball coach all around. He has coached at Elder, Wake Forrest, and Xavier as an assistant coach. Ever since he has been at Winthrop, he has brought fans closer to the action and really has increased the community of Rock Hill’s interest in their college basketball team.

Coach Kelsey has always been at least within a game of the dance and has been very close with the same team after finally making it with the class of seniors now it has to be an extreme accomplishment.

“There was definitely pressure. Getting to the finals three years in a row  is an accomplishment in and of itself, but to come up short each time put a lot weight on this year’s tournament. Our senior class has been magnificent over the last four years. Fortunately, their legacy was cemented with a championship in their final year,” said Coach Kelsey.

Elder has a impact on its graduates that other schools just don’t fully have, with the strong values of family, faith, Coach Kelsey said he has been impacted greatly by Elder. A group of Kelsey’s and friends were all down at Winthrop for the conference championship.

“My family, friends and faith are everything to me. To have so many of them here to share that special day with my wife Lisa and my children was just awesome. So many Elder friends came also. As you know, the Elder community is a family,” said Coach Kelsey.

As for the full week that Winthrop had to rest, I asked Coach Kelsey if he prepared by studying any bracketology or any of the teams that they were projected to play. Coach Kelsey went on to say, “We keep an eye on it but our focus this week is US first and foremost. We are doing some advance scouting on potential three and four seeds who we will most likely play.”
Matchup Preview:
As for Butler, look for forward Kelan Martin to make things happen for the Bulldogs. He is averaging 16.1 points per game and can really use his height to an advantage against Winthrop although Duby Okeke will be a good matchup for him defensively.

Winthrop’s draw was pretty solid, I think that they will match up with Butler pretty well. Someone to watch out for on Winthrop’s team is senior Guard Keon Johnson. Johnson has been playing one hell of a season averaging about 22.5 points per game this season. He also broke the all time record at Winthrop for most career points at Winthrop with 2,059 points over his four year career. He is a fun player to watch because he can make plays attacking the rim even though he is only 5’-7″. His quickness takes him to the next level. His running back like build also allows him to finish through contact giving him many and one opportunities. Look for him to make some plays this Thursday.