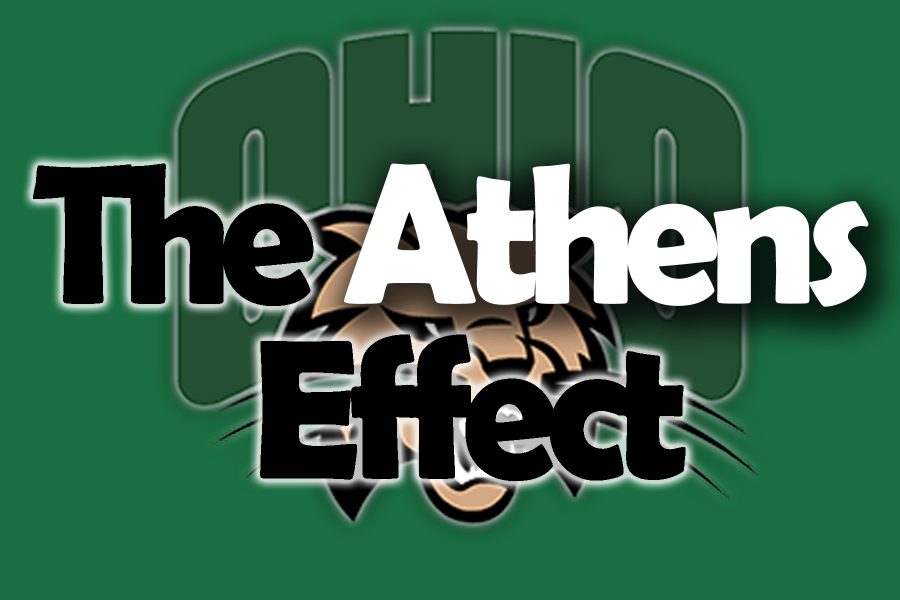 It seems that every year or couple of years, there is a certain college that lures a large majority of that particular senior class.  This year is no exception.  In the past years, Ohio State and University of Cincinnati have taken big numbers.  As the 2017 school year draws to a close, the seniors begin narrowing down their choices for college.

It became very obvious what this year’s trend was going to be, and it was neither Columbus nor Clifton.  However, this year, almost 20 seniors from Elder and countless more students from other west-side schools have enrolled at Ohio University in Athens, Ohio.

Columbus and Clifton both have factors that appeal to a student graduating from high school in Cincinnati.  In Columbus, students can look forward to an enormous campus and hundreds of majors to choose from.  Moreover, as a Buckeye, you get to boast of the numerous Division I sports programs that compete and excel all over the nation.  In Clifton, especially for the Cincinnatian West-siders, the main attraction is the fact that it is close to home, and only a brief trip back to their parents, their family, free meals and their own bed.  For these reasons, Ohio State and UC have steadily attracted Elder guys.

In terms of academics, both Ohio State and University of Cincinnati are greatly respected for their programs in business, medicine and more, and both are difficult to be accepted into.

The question becomes: why Athens? What does Athens have to offer?  The answer to that, I don’t exactly know; however, I’ll tell you why I chose to go to OU.  My brother graduated from Elder in 2012 and went into architecture at Ohio State.  After two years, he had had enough of his professors and the people he was living with, and decided to transfer to Ohio University.  During his first year in Athens as a junior, I went to visit him a couple of times, which sparked my interest immediately.

The Athens campus is a quaint little town, about three hours east of Cincinnati.  There is no expansive skyline lighting up the night sky, no hustle and bustle like that which you would experience in a typical big city.  There are about 30,000 people enrolled at Ohio University right now, which may seem like a lot, but compared to Ohio State, Athens has less than half of the amount of students.

While some might view that as a downside, it is one of the factors that persuaded me to enroll.  Yes, Ohio State has more than double the population, but 30,000 is still a large number of students; large enough that some people laud it as one of the best “party schools.”

Say what you will about that, but in its defense, find a college that doesn’t have parties every weekend.  In my opinion, this just means that Athens people know how to have a good time, even when there isn’t much more to do in Athens.

While that might strike some as a flaw in terms of location, you’d be surprised that location is one of the factors that attracts students from this area, including myself.  For those who wish to get away from home, Athens is a three hour drive, long enough to make frequent trips a hassle.  For those who wish to keep close contact with their family, but perhaps don’t want to live in the same house, the three hour distance might be ideal.

With nothing too exciting around Athens besides the other cities around it, it is quite respectable that it is revered as one of the best colleges to have a good time.  I believe that this speaks for the students of Ohio University.  It shows that they can make a good time out of any situation, as seen by the “fests” they through all throughout campus, often attracting headliner artists and performers.

As for other students, there is a wide variety of reasons and attractions for attending Ohio U.  John Rokich has been almost 100% committed, unwaveringly since his birth.  Recent trips to OU have only made that will greater.

“Have you ever been there?” he asked me.  I told him that of course I had, reminding him that we made two trips to Athens, together.

“Oh yeah, haha.  Then what do you mean what do I like about it? The place is rowdy.  You can walk to literally everywhere on campus in 15 minutes.  Go get food, go back to watch Game of Thrones and chill at the crib, then go back out to party with all of your friends.  Other places, that takes like an hour.”

I can attest.  With so much to do and so little ground to cover, having a good time can proceed as it needs, uninterrupted by a long and exhausting walk.

Dylan Cunningham, another committed Bobcat, told me that he has planned on going to OU for a while.  “My brother Kevin went to UC, but he always is up in Athens with his friends.  He always says I’ll have a much better time at OU than here in Cincinnati and it’s always worth it to be speeding up to Athens to enjoy a weekend with his buds, even if you have to buy some gas on the way.”

Those are two testaments from guys who have been to OU and had the “full experience.”  What are some of the other things that draw people to Athens?

Senior Isaac Moore also plans on heading up to OU next fall.  He told me that he’s going into the highly respected Scripps Program, where he will go into media studies.  In reference to instantly legendary Quill writer Dan McSwigan, he said, “I think D is going there too.  It’s gonna be an unreal time up there.”  Both of these guys said they enjoy the laid back atmosphere of Ohio U, and the size of the campus.

Other people you can expect to see in Athens are Lucas Downey, Adam Schwallie, Joe Brockman, Darnell Dawson, and more.  Oak Hills athletics sensation Cameron Naber is another person to look out for in Athens.  Although there has always been a bit of friendly competition between the Elder guys and Cam’s Oak Hills origins, being united again in Athens is only inevitable.

You’ll see the mass of green around the school on days where we are allowed to wear college related attire, as the future bobcats display their pride and excitement to attend Ohio University next fall.