The NHL sets to kick off one of the most exciting post seasons in sports. 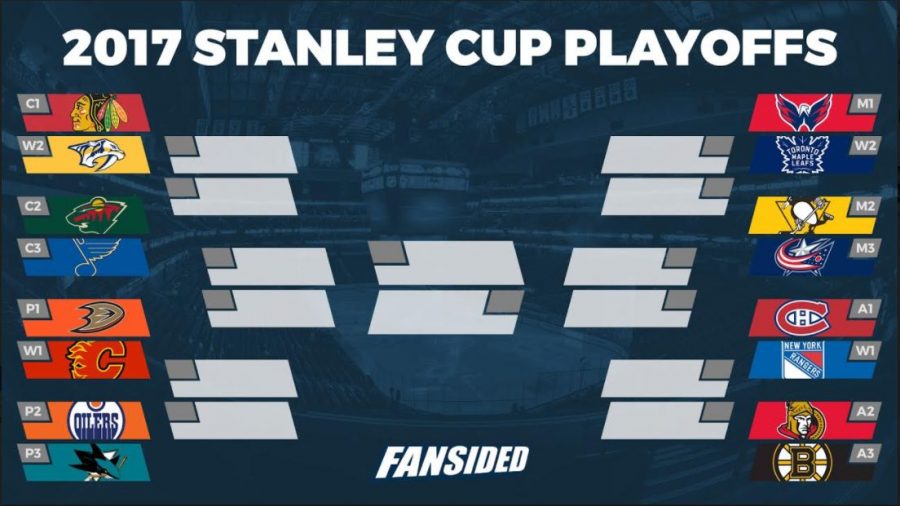 A look into the playoff bracket of the NHL. Credit to Fansided.com

It’s that time of year again for all the Stanley Cup hopefuls.  The games start  April 12, with five games.  This isn’t like the NFL playoffs where the Patriots are the most likely team to win every season.  The NHL playoffs are an entirely different feel.  Anything can happen.  In 2012, the western conference’s final team to squeak into the playoffs hoisted the cup.

Of the 16 team field, every series is up for grabs.  No team is safe until they reach the magic sixteen wins it takes to finish the season as champions.  As the playoffs begin, here’s a look into the first round match ups and the reason why your team will or won’t be storming the ice come June.

The Blackhawks are the quintessence of a playoff team.  They have 65 playoff wins since 2010 and always seem to find a way to get it done.  However, they have a great challenge in front of them in the opening round of the playoffs this season.  Nashville has the league’s best defense led by P.K. Subban and have the depth on the offensive side of the puck to be successful.  However, This is an interesting matchup because Chicago’s offense is filled with point machines.  Patrick Kane, Artem Panarin, Jonathon Toews, Marian Hossa, and even defenseman Duncan Keith will pose a great challenge to the Predators in round one.

Nevertheless, the Blackhawks have been here before and are a better all around team and are nearly impossible to pick against in the entire playoffs, let alone in the first round.  Their experience and composure will carry them by the Predators in what I believe will be a seven game struggle.

The Wild, like the Blue Jackets, are having a franchise season.  Though they had a 1-7 skid in March, they were able to turn it around in the last leg of their season responding with a four game win streak, showing they are playoff ready.  They have been an impressive team to watch all season and behind Devin Dubnyk could be able to not only grasp a first round victory, but also a legitimate shot at the Stanley Cup.

However, the Wild, if they advance past the Blues, will have the Blackhawks of Chicago waiting for them.  The Blackhawks have eliminated the Wild in both 2014 and 2015, so that could pose a challenge for this up and coming squad.

The Calgary Flames will be playing behind the young gun Johnny Gaudreau or “Johnny Hockey”. However, people forget that the Ducks finished the season on an extraordinarily high note finishing 11-0-3.  This momentum will carry them through at least the first round of the playoffs.

The Ducks Stanley Cup hopes are all too real.  If they advance past Calgary, they have the chance to play a young Edmonton team and then possibly the Minnesota Wild who would be setting a record for themselves advancing that far.  This road of facing inexperienced teams in the playoffs could make the Duck’s dreams a reality.

There’s only one name to say about this series, and that’s the Art Ross Trophy recipient’s name: Connor McDavid.  He’s electric.  He gets everyone involved, and at just 19 he lead the young Oilers team back into the playoffs for the first time since 2006.  The Sharks will fall to the beast that is Connor McDavid and the Edmonton Oilers because of not only the sophomore star, but also Cam Talbot who has been excellent as of late.

Though the Oilers will advance through the first round, McDavid can only do so much for this young team.  The lack of defensive depth will result in this team’s demise in the playoffs.

The Blue Jackets have never won a playoff series, but this year is the year for the Jackets.  They have had the best regular season in franchise history, and, last time they tangoed with the Penguins as a seven seed, they had the heavy favorites on the ropes.  This time, the Jackets are prepared for the Penguins.  Also in the Jacket’s favor, they have the best goalie in the NHL both in save percentage and goals allowed in Sergei Bobrovsky.  The Penguins also suffered the season ending loss of star defenseman Kris Letang.  It will be difficult for the Penguins to overcome these odds to beat the hottest growing team in the NHL.

Some concern for the Jackets could be from the recent skid they have suffered.  They have gone 1-6 in their final six games of the regular season.  Hopefully, they were getting the playoff jitters out of the way before they begin to matter come Tuesday night.  Columbus’s playoff inexperience could also prove detrimental.

Though the Rangers have King Henrik Lundqvist in the net, their defense has not performed well this year.  Even King Henrik has had a down year compared to his godly past.  The Canadiens have a great defense.  Everyone knows the jaded saying, “Defense wins Championships.”  This saying, however cliche will ring true for this series, no matter how good the Rangers are on the offensive, Carey Price and Shea Weber will outshine New York.

The winner of this series will easily be a non-factor in the deciding of the Stanley Cup victor.  Even though the Canadien’s defense should lead them past the hobbling Rangers, their offense will need to come alive in order to make any sort of run to the finals.  They have all the right pieces with Plekanec and Gallagher, but neither are producing any offense.

The Boston Bruins speed and transition game will give them the edge in this series.  The face-offs won by Patrice Bergeron, which he will undoubtedly win a lot, will lead the fast paced Bruins to victory.  Erik Karlsson, the best overall player on the Senators roster is coming off of an injury, and will struggle to get into a rhythm early in the series, and once you’re down to Boston in the playoffs, there is a very limited chances of a return.

The Bruins are my vote for the playoff dark horse every season, even though they have been hit by the injury bug this season, they always seem to find a way to turn it on for the playoffs.  Even if you hate the Bruins, it’s hard to admit they are not one of the most exciting teams to watch come playoff time.

The clear favorite in this series is the Caps.  The Capitals are the President’s cup winners meaning they had the best record in the regular season.  The Capitals not only have the best offense in the league, but one of the best goalies in the league minding the net in Braden Holtby.

This is not bad news for the young Maple Leafs that are lead by the rookie sensation Auston Matthews.  This season serves as a stepping stone for things to come from the talented young squad.  It’s just unfortunate they are matched up against the experienced team in Washington.

Though the Capitals will most likely race through the Leafs in the first round, they have been the definition of a disappointment come playoff time in the past.

As Joshua Kloke said, “The longer a contender goes without winning that elusive first Cup, the bigger that mental hurdle becomes. All the talk about the Capitals not being able to get it done in the playoffs could be beginning to wear on their core. It will just be a mental war of attrition for the Caps because they have all the tools to get it done otherwise. ”

The Caps are still in search for the that first cup.  The only thing that could bar the Capitals from a great chance at winning a cup is themselves because they have all the tools to be successful come June.