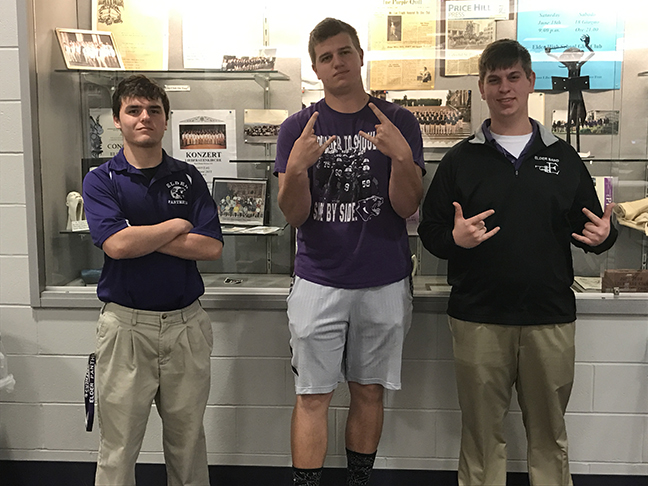 Elder High School has their fair share of bands like every other high school does. A high school band is great way to have fun with people that like playing music just as much as you do. Elder’s newest band, Patient Zero, talked to me about what it is like to be in a high school band.

The members of Patient Zero are Ben Huhn, who plays drums, Eddie Broderick, who is lead guitar, and Ben Siefke, who is bass guitar and lead singer. Siefke told me that it was Eddie’s idea. “Eddie got us together for the talent show, and we realized that we sounded good together, and it just kind of stuck,” said Siefke.

Ben Huhn described how the band got its name. He said, “Siefke put up a little snapchat story wearing a mask, and it said Patient Zero. Later in math class we were talking about functions, and Mr. Schlomer mentioned Patient Zero… I asked everyone if it was good, and everyone thought it was a good name.”

Patient Zero is a rock band that covers hard rock and metal. But they plan on beginning to write their own songs soon.

Every band member has his own musicians and bands that he looks up to. Huhn said the first band he ever listened to was Black Sabbath. Black Sabbath was also one of Siefke’s inspiration to join a band. Other bands that these two have looked up to are Metallica, Slayer, and Mastodon.

Siefke said he also looks up to country music legend Johnny Cash. Cash is a classic country singer who was never afraid to tell people what he really thought about them. He had a few stints in jail, and he had outlaw style to his music. Obviously his influence has gone far beyond the country genre. “Johnny Cash was a great songwriter. That man’s songs are still amazing,” said Siefke.

Patient Zero’s first gig was at Elder Fest, and they all said they really enjoyed it. They said they enjoyed playing music with each other in front of a group of people. “The best part was just being able to play. Not many people show up to that, but I see it as a way to see where we are,” said Broderick.

Patient Zero is a high school band just looking to have fun doing what every member loves: playing music. They do not care if they are playing at Elder Fest in front of 30 people, or if they playing in some big stadium years down the road. They realize that the most important thing about being in a band is the music you make, and those you play music with.

Siefke summed up what it is like to get to play in a band with your friends. “Just playing music with some awesome musicians. Nothing better.”