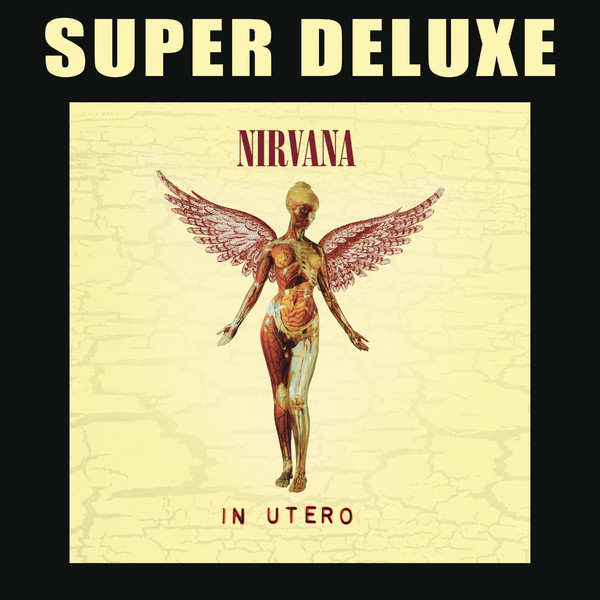 The super deluxe edition of the album contains the original album, new mixes for those songs, b-sides, and all songs from Nirvana's Live & Loud MTV performance

To some, it seems like only yesterday when every teen and young adult could be seen wearing a flannel and ripped jeans, part of the grunge fad of the early 90’s. As for others, they are glad that the “noise” of this time period ran its course. No matter what the type of person, the importance and significance of In Utero should not be overlooked.

In order to realize the effect In Utero had, one must look at events that preceded the release of the album in September of 1993. To keep a long story short, Nirvana had worked its way up the very top in the music world. Nevermind, the band’s sophomore album, sold 30 million copies worldwide and is among the top 28 most selling albums of all time. The band was seeing fame whether they liked it or not, and with fame came a myriad of stipulations thrown at Nirvana, trying to tell them what they could and could not do.

All three members of the band (Dave Grohl, Kurt Cobain, and Krist Novosellic) were shocked by the rapidity of Nevermind’s success. Just a few short months before, they had been playing shows in front of maybe 500, and now MTV was begging them to perform at the VMA’s.

For a band coming off a record that sold 30 million copies, the push for an even better album to follow seems like it would be a big deal; not for Nirvana though. In fact, the band itself was probably the least concerned out of anyone it worked with about what the album would be like.

In Utero will always be remembered because it made a point. If any artist is serious about preserving the integrity of music, this album should be good inspiration. Some songs might even scare fair weather listeners whose favorite Nirvana song is “Teen Spirit” only due to its constant radio play; it’s exactly what the band wanted though, to weed out the fakes who they despised in the first place.

With that being said, In Utero is definitely an album that may take time grow on an individual. Not to say that every song on the album is a complete noise-fest, (“All Apologies” is a very upbeat and flowing song) but there are definitely songs that will make some listeners confused and excited at the same time. Hard rock fans will enjoy its mostly heavy song list, while others listen carefully on just what exactly Cobain is singing and meaning by his lyrics, although that may never be deciphered.

The reissue is not just a ceremonial re-release of the twelve songs on the original album; it also includes B-sides, re-mastered songs, and a DVD of Nirvana’s full “MTV Live and Loud” performance. Ardent fans don’t worry the 2013 mixes in no way change the live recording feel that each song brings. Items such as feedback and drums are simply turned louder, giving the songs a modern recorded sound but at the same time keeping the art.

Sadly, the album turned out to be the band’s last due to Cobain’s suicide in April of 1994. In Utero should not be listened to as a tragedy, however. The album was simply the next of what could have been many more Nirvana albums. Thankfully, fans of music can appreciate that the band never gave up its DIY ethic, and In Utero is a direct result of that.