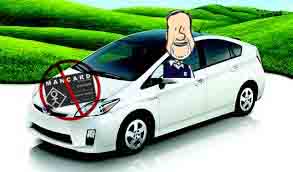 As many students at Elder High School have noticed there is a new pearly white Toyota Prius in the parking lot. This fresh whip belongs to Mr. Rogers.

After getting in a wreck just over a month ago and totaling his chick magnet of a Honda Odyssey, it was time for Mr. Rogers to get a new car. While car shopping, he borrowed his sister’s maroon convertible for a couple of weeks, but then  finally decided to lose his man card. He pulled the trigger on a 2012 Prius. He liked the fact he could get a 2012 car with really low miles at a fair price.

The Toyota Prius has a stereotype of being an ugly car for people who love being “green.” Being bigger than a Smart car, the Prius is still small compared to other sedans. This small size does not make the driver look masculine or tough at all.

Other gas friendly cars such as the Honda Civic, Nissan Sentra, or Ford Focus, don’t seem to have the negative image of the Toyota Prius. If you have a conversation between most guys and a Prius pops up. It is almost guaranteed to get ripped on.

“I think he looks like a bigger tool now than when he failed me with a 69.8% in journalism last year,” said senior Mark Mazza, a very hard working student who always turns every assignment in. “I would never be caught driving one of those things.”

Even though the car is not so manly, it at least more than doubles his gas millage. His minivan got less than 20 mpg, this new high tech hybrid car will get just over 50 mpg.

Rogers is constantly on the road, either driving to his parent’s house on the east side, getting out to golf matches, or reffing all over the city. The great gas mileage will save him a fortune. With the gas prices so unpredictable and always on the rise, this could be one of the only bonuses to getting a Prius.

“Although he may be saving some money with the improved gas efficiency, there is no way it could make up for the embarrassment of relinquishing the man card,” said Elder Varsity Golf Coach Matthew Robben. “Man cards don’t just grow on trees.”

Clearly, Mr. Rogers is not worried about the stereotype of a Prius. Everyone already knows he’s a man. I guess he doesn’t need a monster truck or a muscle car to have the self image of a macho man.

“I knew I would take some heat on the choice, but that never mattered to me,” said Mr. Rogers. “I’m over my midlife crisis, I think.”