Should The Pit be upgraded? 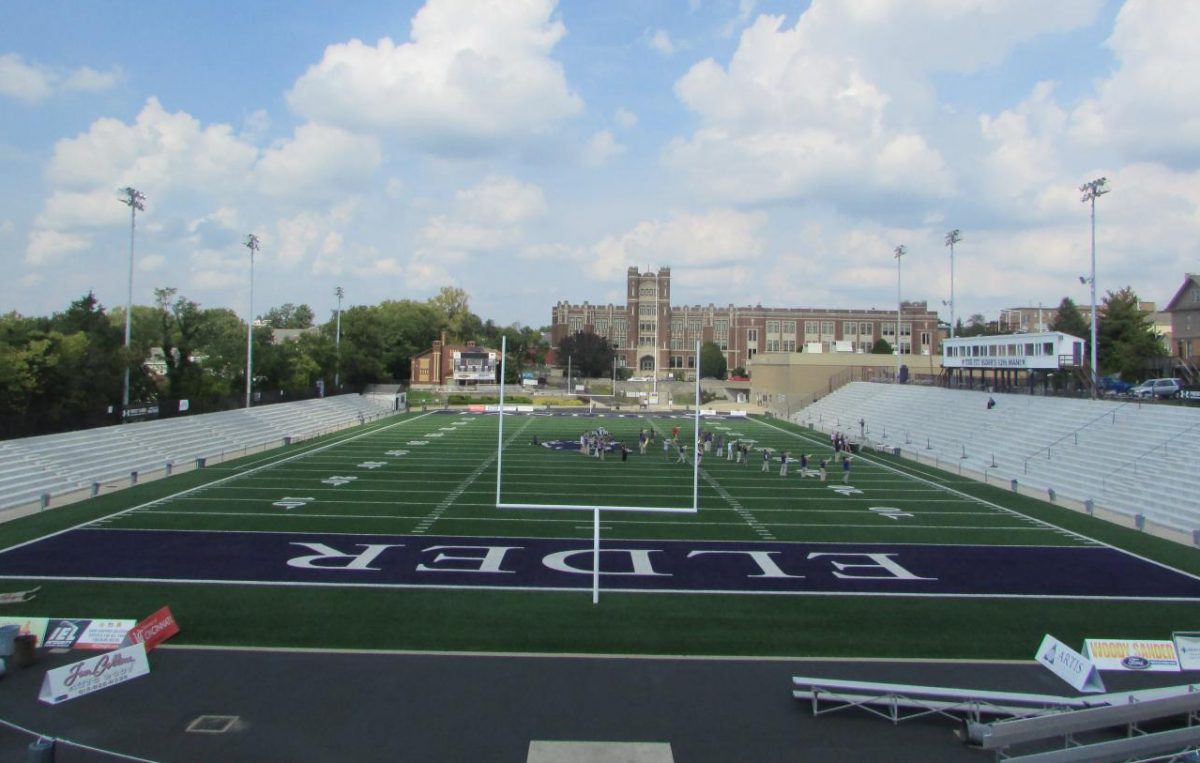 In the fall season, Friday night games at The Pit are the place to be. Whether you are an Elder fan or a visitor, you have to be impressed by the facilities at Elder. In 2001, USA Today rated The Pit one of the top ten places to watch a high school football game. Constructed in 1947, the stadium has seen countless games. The stands hold about 10,000 people. In recent history, the first artificial turf was installed for the 2005 season and was replaced for the 2015 season. However, the real question is … should the rest of the Pit be upgraded?

To get more information about the scoreboard and stadium, I had a conversation with Elder’s Athletic Director, Mr. Espelage. Mr. Espelage explained the scoreboard situation. “For a video scoreboard, it would cost around 80,000 dollars. Technology like that is overrated because it would only last about five to six years. We put two days in the summer replacing the light bulbs and it (current scoreboard) will be used to the best of its ability.” Elder football player Bryce Martin also thinks that Elder needs a new scoreboard. However, he but would like to keep the panther on top of any replacement scoreboard.

I agree that we should get a new scoreboard. However, I think the scoreboard should be similar to the one we have now. I am not in favor of a video board for two main reasons. First, the scoreboard would take up too much space and would create a distraction to the Friday night atmosphere. I like looking up and seeing the weight room in the background. Second, it adds character the stadium. The scoreboard has been sitting in The Pit since 1998 so it has some history.

Football player Jack Hilvert has a different idea for a stadium update. “I think we could use some louder speakers.” I agree completely with Jack. If you sit in the far end zone during the game, it is very hard to hear Mr. Louis’s voice. A way to fix that would be to add a speaker in both end zones.

I did receive some major upgrade ideas from Sam “SK” Kayse. “It would be cool if they added more seats, to make it one of the biggest stadiums.” He would put a second deck in the horseshoe or on the away side.

Throughout the years, locker rooms have changed a bit. Before the fieldhouse was built, the varsity football locker room was under the stadium next to the trainer’s office. Around the same time the fieldhouse was completed, the current varsity football locker rooms were built. The JV football team used the old locker room under the stadium until 1993, when it was filled with cement and closed off. The door right next to the trainer’s office leads to a storage hallway, where the cemented locker room is located. To this day, you can see the tiles of the shower stalls and imagine the area as a busy, noisy locker room.

As I continued my quest to find out what needs to be upgraded, I stopped by the trainer’s office. I talked to Assistant Trainer Aimee Bruketa about her thoughts on an upgrade. She told me that the trainer’s room could use more treatment tables and a storage room. One of her ideas for expanding the trainer’s room is knocking out the senior football locker room and using that area for a new trainer’s room. The junior locker room could be used for basketball. Aimee said they could add a second floor to the fieldhouse and build new locker rooms, offices and other meeting spaces above the gym. However, that is a major renovation and might cost millions to complete.

If you haven’t already noticed, there have been some recent updates to the stadium. During the school year, Dr. Tucker and Mr. Espelage tore down the shed right next to the fieldhouse. The hill leading down from the weight room was sodded again. Some classes even helped out with stadium changes. Technical Life Skills, which is taught by Mr. Espelage, painted the reserve section standards in the seats. The biggest upgrade to the stadium is happening every game this football season. At the fieldhouse and horseshoe concessions, they are now accepting credit cards for purchases.

In the near future, I would not be surprised if we see more new additions and changes to The Pit and the surrounding athletic buildings. For example, I was told that the inside of the basketball gym might have a new look very soon. Changes to the stadium are always well thought out and for the good. As Mr. Espelage said, “We always look for new things to try to keep improving the fan experience.”

I think upgrades in The Pit are exciting for everyone. It creates more fun and interest for the fans and for the players. Some people might want to see major changes. I am one of those people that say small modifications are best. I am not in favor of any huge changes because I do not want tradition to be lost. The Pit will always be one of the best high school stadiums in the country for years to come.