End of a dynasty: Nugent steps down 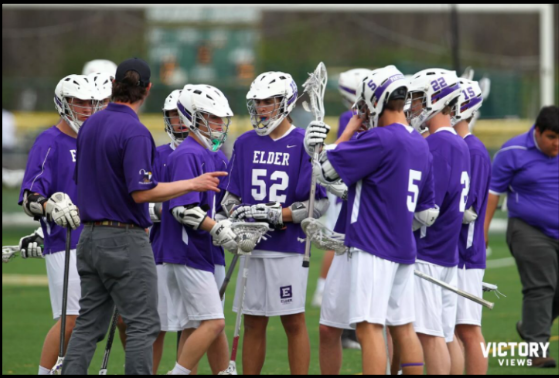 Nugent lays down the game plan in a team huddle.

Rumors were circulating from player to player throughout the school day after the curious announcement calling for the lacrosse team to meet in the wrestling/volleyball gym after school.

Usual team meetings were held in Mr. Nugent’s room to discuss days for lifting or even possible ideas for improving practice or game scheduling. However, there was a more ominous atmosphere surrounding this meeting.

Aside from an indoor lacrosse league thrown together by Mr.Nugent early in the summer, the usual rigorous offseason conditioning was non-existent. The team had been noticing the recent lack of involvement from Coach Nugent, and the upcoming news would satiate the probing questions of each player.

After the whole team was assembled, Coach Nugent began to speak. But there was not the usual energy and positivity in his voice, rather he was more solemn than ever. The teams’ fear had become a reality.

Nugent proceeded to inform the team he was stepping down from his position as head coach of the lacrosse team and gave his reasons.

“The only reason for me stepping down was so that I could fulfill my family responsibilities as a father. Sophia is now a freshman at SUA which means her little sister Sadie who is in the fifth grade must get off the bus alone,” said Nugent.

He then elaborated, “In order to help with transportation for Sophia and care for Sadie I had to make the most difficult decision of my professional career and stop coaching at Elder.”

Athletic Director, Coach Espelage, then stepped in and further explained the justifications of Nugent’s decision.

“Coach Nugent and I had talked before the official announcement. Coach is a well thought out person and this was by no means an easy decision for him. He certainly did not wake up one morning and say, ‘I am going to quit today’,” said Espelage.

Espelage also admitted that although you want a good thing to last a long time, after speaking with Coach Nugent and hearing his thought process, he certainly made the best decision for his family and the lacrosse program.

Although Nugent’s self-sacrificing call to step down was the best option, the players were left with heavy hearts after the meeting.

One of the most highly skilled players, Preston Winner, came to Elder largely because of the lacrosse program and his early interactions with Nugent.

“Nugent did a lot for our program. He’s easily the best coach I’ve ever had. He knew how to push the entire team in a way no one else could. It’s sad to see him step down but all good things come to an end,” said Preston.

Starting goalie Vince Sabato was also heavily affected, “I was pretty upset that day. It’s just hard to see someone who has been there as a great coach my whole life stop my senior year, especially since he was a goalie too.”

Senior Corbin Scholtes also added, “Even though I quit this year, it’s still rough because I know the affect it will have on teams in the future. He definitely made the right choice though.”

Current players were not the only ones affected either. Former captains Jack Streicher, Ross Mullen, and Sam Middendorf had different reactions when they heard the news.

Streicher said, “I was surprised that coach was stepping down. I did not really see it coming, but I understand that his family comes first.”

Streicher also acknowledged Nugent’s contribution to the lacrosse program was profound. He credits coach with transformation the team went through which made it competitive within the city.

Ross recalls his favorite moments with Nugent when he continuously harassed Braden Roth (as a joke), and enjoyed every practice even if sprints were more tiring than usual.

And lastly, Sam Middendorf humbly admitted, “If it was not for Coach Nuge, I would have never been a boss as lacrosse.”

As for the new coach that will take Nugent’s spot… it is still unknown. However, Espelage assures the team will have a well qualified coach for the 2018 season.

Coach Nugent made it evident that love was the core of his choice, and walking away was not an easy decision. But the future looks hopeful and as Nugent puts it, “God just works in mysterious ways sometimes.”