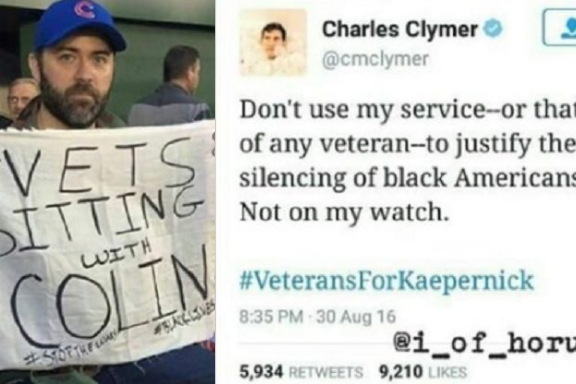 A veteran holding a sign in support for Colin Kaepernick

At the beginning of last year Colin Kaepernick took a knee during the National Anthem. It seems like something that someone could have overlooked now, but last year it seemed like the biggest disgrace to America ever.

Kaepernick said he was taking a knee for the injustice against blacks in America. When he first started kneeling, it was around the time three cops allegedly shot unarmed black teens.  The world flipped when they saw the disgrace that was Kaepernick kneeling. It was also around the time when everyone picked a side.

People started saying that it was disrespectful to the American troops. At the same time many also said that it was his right to protest because of the first amendment. The argument on the other side was that first amendment didn’t apply because he was an employee. Promptly, everyone took a side.

Groups like Vets for Cap started to pop up.  They said they served so that people like him have the right to protest. But some veterans also took a strong stance against Kaepernicks actions. Burning his Jersey and saying he was being anti-American.  Civilians also started choosing sides. The Black Lives Matter organization supported Kaepernick completely. BLM said it was brave for him to protest racial injustice. More conservative leaning Americans said you can protest racial injustice, but just show reverence for the flag that many have died for.

Looking back on Kaepernick now his actions don’t seem that bad. Because on September 24 the NFL took Kaepernick’s idea to a whole new level. They were responding to President Trump’s comments, because he said NFL players are s.o.b.s for kneeling. Most teams showed unity by wrapping arms together. Other stayed in their locker rooms. Some players still knelt. One player who most had a problem with was Lesean McCoy, who stretched and showed total disregard to the Anthem.

On that Sunday the same arguments from last year reappeared. Players who knelt were showing disrespect to the Americans who were serving in the military. The other side said there was no problem because they were exercising their first amendment and peacefully protesting.

Everyone has their right to an opinion but I wanted to find out how veterans feel about this issue. Because they are the people who fought for the flag.

Michael Sand is a former Green Beret, and comes from a family of military service members. As he wrote on Facebook, his father was a World War II veteran fighting fascism, he served in Vietnam fighting communism, and his son is currently serving in the Army fighting the Taliban and terrorism.

“Three vastly different enemies, but enemies who shared one common trait,” Sand writes. “ALL of them stifle free speech. All of them bully, degrade and terrorize those who hold opposing views and who peacefully express them.”

After I read this I wanted to know how veterans I knew felt about the issue.

I asked my grandpa Jack Schaffer, who served in Korea, how he felt about players kneeling and other things. He said, “I believe it is their right to protest as long as it is peaceful. It is weird to me because that flag means so much to me and when I was a kid no one would think of showing disrespect to the flag.” I did not think that my 85 year-old grandpa was going to be as open to the protest as he was.

For another point of view I asked my Uncle who served in military in the early 90’s. He said, “As a veteran I love that flag. But as a white male, I have never felt racial injustices like some of these black players, so it is hard for me to judge. I really appreciated the teams that showed unity by wrapping arms. To me, that was cool because it got people’s attention but also showed respect to the flag.”

Both of these people are conservative and veterans so it surprised me how okay they were with the protest.  It’s hard to get actual percentages for how many veterans are okay or are not okay with kneeling, but according to my research and people I asked, veterans are alright with the protest. I believe that if veterans can be okay with people not standing for the anthem, then most civilians should also.