Are NFL protests going too far? 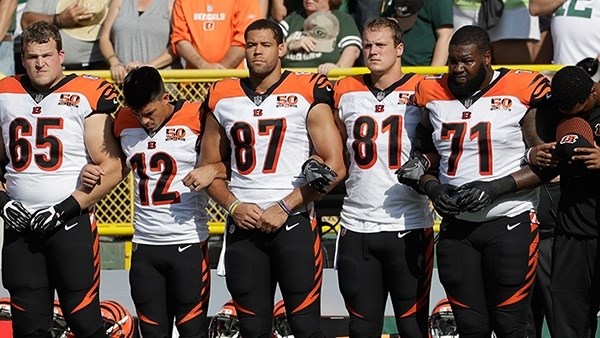 The hot topic around the NFL have been the protests. the Cincinnati Bengals shown here are only one of the teams that have not protested.

In a year that has certainly been troubling for many, NFL players have been adding salt to the wound by protesting the national anthem. The national anthem is the most reverend and respected song for America. Many say it has been disrespected brutally by a share of players who think it is right and just to stand, sit or, even not go onto the field. Quite a few teams have taken the oath to not even walk on the field when the anthem is playing. Only one team has actually done the right thing by standing on the field and that team is our beloved Cincinnati Bengals. Thirty-one out of 32 teams have not been doing what is right. The thing about the protests is that they should be banned.

Protests in sports don’t really happen that often. But football is the sport from which this controversy sparks. You really don’t hear lots of it going on the world of baseball or any other sport.

Maybe the real reason the protests are dominating the news is because of the comments from Donald Trump. He stated that if NFL players kneel or stay in the locker room during the national anthem, they should be released. The players protesting the anthem should not be released, that seems a little bit too harsh. Instead they can face a fine or even a suspension, you should treat these players just like the ones that have issues off the field.

Baseball players have not been known to protest the anthem because they know if they were to protest the anthem they would find themselves in hot water. In hockey it is not commonplace to see NHL players protest the national because the majority of the players are from international countries. The commissioner seems reluctant to do anything to stop the protests. The NFL is rapidly losing a popular fan base. If the protests don’t stop soon more and more people will stop watching the games.

My opinion on the NFL protests is that they should be outlawed. Football is too good to have it tarnished by players who think it is right to have protests ruin it completely. Majority of people like veterans think the protests are ludicrous, veterans fight for our country and lay their lives out every single day. Players shouldn’t be protesting especially when they know in the back of their minds guys that are tougher than them sacrifice their lives for our country each and every day.

If football does not stop the protests from happening soon a well-known sport will find itself in a world of trouble. Some people will object or even go as far as destroying things like jerseys and other memorabilia. There is really no reason why sports players should be protesting the anthem. Everyone will notice and start to take their own action toward what is happening.