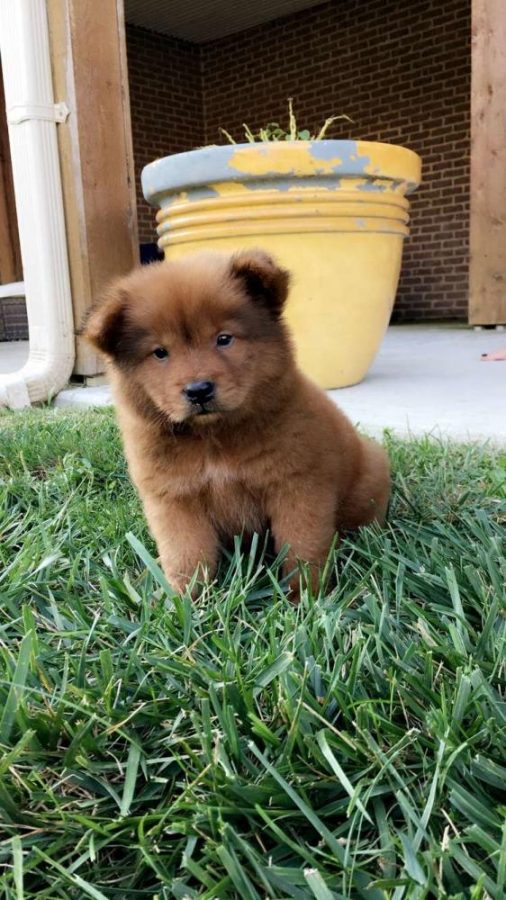 For anyone in the market for a dog, Maxwell Deters is your man. The Deters family is fostering Chow Chows that they received from Paws for Miles rescue organization. They currently have five puppies: two boys and three girls. These pups are nine months old and roughly 15 to 20 pounds.

I asked Maxwell how long he plans on having the puppies. “We have been fostering them for about two weeks now, and quite a few families have already shown interest so who knows?”

Chow Chow is a dog breed originally from northern China. In China, it is referred to as the Songshi Quan, which translates to “puffy-lion dog.” They have a thick and coarse coat. Its coat is especially thick around the neck giving it a lion mane look, hence the nickname.

Fun fact: the Chow was a popular dog during the reign of the Tang Empire in China and is one of few ancient dog breeds still in existence today.

When fully grown, this dog can reach nearly two feet in height. A male Chow can reach any weight ranging from 55 to 70 pounds, while a female may reach anywhere in the 45 to 65 pound ballpark. They are quiet, loyal, and independent dogs. Their average lifespan is 12 years, but can be as low as nine and as high as 15.

They are found in a multitude of colors. They can be reddish (red-brown), a cinnamon-like light tan color, black, cream colored, and a blueish grey. The puppies Maxwell has are reddish brown, tan, and black. All of which are adorable.

The Deters are giving the dogs away for a small fee. They are asking for $300.

Normally a Chow is sold for nearly $3000, so you are getting a deal. They don’t want money: this price includes the dog’s shots and getting them neutered or spade. They just want a loving home for the pups,

“They are great dogs who enjoy humans, and they need a loving home.” Maxwell says they are very friendly and wouldn’t hurt a fly.

All you dog lovers out there need to consider a Chow. Not to sound like an SPCA commercial that makes you cry, but don’t let another day go by in which these pups don’t have a place to call home.