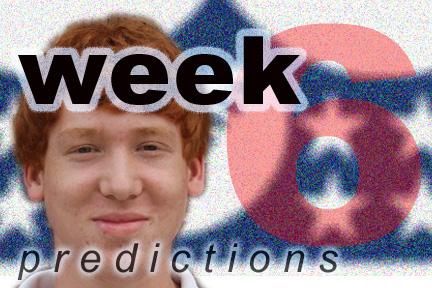 Last week, I went 9-5 on my game picks as we saw a lot of the favorites win games. We saw the Broncos win a shoot out in Dallas, and the Bengals win a defensive battle in Cincinnati. While the Patriots and Seahawks faltered for the first time this season, the Saints beat the Bears to remain undefeated. The Saints and the Broncos are the only two teams that are unbeaten. This week has some interesting match-ups.

New York Giants @ Chicago Bears (Thursday game): The Giants are the second worst team in the league. Eli Manning drew three intentional grounding penalties in nine plays last week. Eli has been turnover prone this whole year. That will not be good when they face one of the best defenses in terms of take-aways in the league. Jay Cutler and the Bears have dropped two in a row, but those were to two teams with high powered offenses. Brandon Marshall should get more targets against a banged up Giants secondary. Tom Coughlin’s job is probably on the line the next couple weeks, so the Giants could show some fight for him. But, that Bears offense is just too good for the Giants defense. And, Eli Manning just is not making smart plays right now. Huge edge to the Bears.

Bengals @ Bills: The Bills are in trouble this week. After EJ Manuel got hurt last week against the Browns, rookie quarterback Jeff Tuel came in and played horrible. This week they are forced to start Thad Lewis at quarterback. Lewis has been on their practice squad all season long. He will have a rough go of things against a Bengals defense that is among the best in the NFL. The Bengals defense looked impressive last week against the New England Patriots. That defense could get even better as they should get defensive end Michael Johnson back this week. Andy Dalton and the offense struggled, but the Bills allowed Brandon Weeden to reach the end zone a couple times last week, so expect Andy Dalton and AJ Green to have big games. This should be an easy one for the Bengals.

Rams @ Texans: The Texans struggled last week at San Francisco. Matt Schaub was benched in the fourth quarter after he was pitiful in the first three. He was so bad that fans waited at his house to voice their displeasure with him. The Rams won last week, but they played the Jaguars and didn’t look very impressive in doing so. Everybody says Tom Brady doesn’t have any weapons, well Sam Bradford hasn’t had any weapons since he got drafted. At least Brady gets Gronk back this week. I expect the Texans to get back on track in a must win situation against a bad team. I expect a heavy dose of Arian Foster and watch out for Andre Johnson versus Cortland Finnegan. Those two infamously got into a fist fight a couple years. That should be a fun match-up, but expect Andre Johnson to win it as the Texans cruise.

Titans @ Seahawks: The Seahawks don’t lose at home. They just don’t. Seattle has the best home field advantage in sports, and it is also the loudest stadium in the NFL. The Seahawks lost to the Colts in Indy last week, but they had the lead pretty much the whole game. That Seahawk defense is not the best defense in the NFL, but it will still give Titans quarter back Ryan Fitzpatrick a bunch of trouble this week. Seahawks home winning streak should stay alive.

Broncos @ Jaguars: The NFL’s best team versus the NFL’s worst team. Peyton Manning and the Broncos scored 51 points on the Cowboys last week. The Jaguars have 51 points on the season. The Broncos defense showed some flaws as they gave up 48 points, but they should have no problem against the Jaguars offense. Blaine Gabbert got hurt last week, so the Jags could have a better chance of scoring points, but he will probably play. Jacksonville opened up as 28 point underdogs at home. That is the largest spread in NFL history. The team twitter accounts got into a war of words earlier in the week after the Broncos tweeted a stat the Jaguars didn’t like. The Jaguars account probably shouldn’t have tweeted back because their team just can’t back up the talk. Jacksonville: your team is horrible, nobody goes to your games, and your quarterback can’t play in the NFL. Why not sign Tebow?

Lions @ Browns: The Lions should win this game, right? Matthew Stafford is a prolific passer when Calvin Johnson is on the field. That’s the problem though. Calvin Johnson might not be on the field. Detroit has looked good one week and bad the other. But, Brandon Weeden is the starter in Cleveland. Weeden has struggled so far and was even benched. So, we will see if Weeden can get over the mental factor of his benching. If Megatron is back, Detroit cruises easy. But, if he doesn’t play or looks like he is hampered it could be a win for Cleveland. It should be interesting to watch this game.

Eagles @ Buccaneers: The Eagles looked good against a horrific Giants team last week. Nick Foles came in and played well. He will probably get the start this week as Mike Vick is not expected to play. Meanwhile, the Bucs had a bye week. So, they should get plenty of time to prepare. But, the Bucs can’t score and the Eagles can score a bunch of points under Chip Kelly. That is not a good combination for a winless Bucs team. Mike Glennon will score some points this week, but it won’t be nearly as much as the Eagles. But, then again the Bucs do have a pretty good defense under Greg Schiano. The Bucs will have a puncher’s chance.

Packers @ Ravens: The Packers dominated the Lions last week. Their offense was a little off, but their defense was great. They didn’t have Clay Matthews, but the Packers defense was able to stifle the Lions. But, there is an asterisk because Calvin Johnson didn’t play. Meanwhile, the Ravens beat the Dolphins in a close overtime game. The Ravens are way too dependent on their defense to win this game. Aaron Rodgers is just going to be too much for the Ravens. The Ravens know they can’t win a shootout, so their defense knows they will have to hold the Packers to under 21 points if they are going to win this game.

Cardinals @ 49ers: This one could be an upset. It is always tough play division games. The Cardinals have an outstanding defense leady by the best corner in the game, Patrick Peterson. Plus, the Cardinals have an excellent run defense. Darnell Docket can rush the passer, too. But, it’s not just the Cardinals defense that is good. It’s that San Francisco’s offense is not good. The 49ers crushed the Texans last week, but Matt Schaub was terrible and gave the 49ers the lead on the first play of the game. I don’t think Colin Kaeperknick can come from behind in this one. I think the Cardinals have a chance. Especially with that defense. But, then again Carson Palmer is the quarterback in Arizona. That makes Arizona a scary pick.

Raiders @ Chiefs: Terrelle Pryor has come on for the Raiders in a big way. He torched the Chargers last week on the road, and has been able to make plays with his feet and his arm. Darren McFadden will be back for Oakland this week, so that should improve their chances against a very good Kansas City defense. Oakland’s defense has also been pretty good. The Raiders nearly beat the Colts, who have beaten the Seahawks and 49ers, in week 1. Alex Smith has proven he won’t turn the ball over, but he has yet to prove he can go win them a game. Another division battle that will come down to the wire.

Panthers @ Vikings: Two bad teams facing off in Minnesota. The Vikings have the best running back in the league in Adrian Peterson, but the Panthers have an awfully good run defense. Luke Kuechly, from St. X, is a beast in the middle of the field. Matt Cassel will get the start, which isn’t that big a difference from Chrisitan Ponder. Cam Newton has to start winning games sooner or later. They should have beat the Cardinals last week, but Steve Smith couldn’t hold on to the ball. I think Cam gets a couple touchdowns this week against a bad Minnesota secondary.

Steelers @ Jets: The Jets’ defense is among the best in the league. Rex Ryan is a pure genius on that side of the ball. But, its tough to hate on Mark Sanchez when Rex Ryan has completely ignored that offense to make that defense great. The Steelers are a mess. The offense is bad, the defense is bad and they are an old football team. But, they are coming off a bye week and Big Ben is a quarterback that can burn this Jets defense because he is so hard to tackle. Plus, the Jets lost their best pass rusher, Antwan Barnes, for the season last game. Steelers could get a close first win. Steelers by a field goal.

Saints @ Patriots: The Saints are for real this year. Jimmy Graham is having the best season for a tight end ever. It doesn’t hurt that Drew Brees is throwing him passes. The weakness last year was the defense. That is not the case this year. Rob Ryan has that defense playing unbelievably well. Malcolm Jenkins (from The Ohio State University) is having a pro bowl caliber year at safety. Gronk is back for New England, but Tom Brady will still be frustrated by lack of weapons on the outside. I think Saints win, big. But, it is in New England.

Redskins @ Cowboys: Breaking News: Tony Romo does not suck. Romo outplayed Peyton Manning for all but two minutes last week. At the end of the day, Tony Romo will always break your heart in the end. But, not this week. The Redskins have the worst defense in the NFL. Tony Romo should eat that up. So, for all you fantasy owners Tony Romo is a no brainer start. But, then again RG3 is coming off a bye week and he will also have a big week. I don’t doubt RG3, but the Skins’ defense is awful.

Colts @ Chargers: Andrew Luck and the Colts are a contender. They have two statement wins over the 49ers and the Seahawks which have them sitting alone in first place in their division. The Chargers lost last week to the Raiders at home. Phillip Rivers has played poorly in back to back weeks. Andrew Luck is one of the best quarterbacks in the league, already. But, Chargers are playing at home and there have been all sorts of upsets on Monday night football lately.