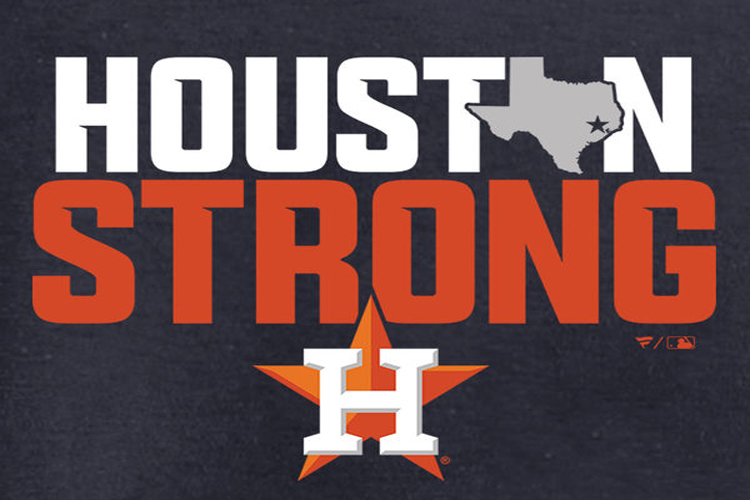 The Houston Astros have completed their quest and won the first World Series in franchise history. It took seven games, and one of the greatest series ever, but they got the job done.

Prior to this series taking place however, the city of Houston had much bigger problems than trying to figure out how to win baseball games. This is because the city was thrashed by a hurricane. Hurricane Harvey hit Houston on August 17, and continued on its path of destruction until about September 3. The Hurricane reached winds of up to 130 mph, caused 91 deaths (63 direct and 28 indirect). Total damage from Hurricane Harvey has totaled up to about $198.63 billion, which makes it the costliest natural disaster in the history of the United States.

In the aftermath, the Houston Astros began to wear patches which had the logo of the team with the word “Strong” on the bottom of the patch, as well as promoting the hashtag Houston Strong. With these icons prominently displayed, the Astros won the 2017 World Series. Manager A. J. Hinch has stated in an interview that the team wasn’t just playing for a title, but to help boost moral support for the city.

During the series I thought you could really see the passion of these athletes. Houston has never really had playoff success with any of their major sports teams, and after the hurricane hit, it was seemingly the only thing the city really had to fall back on. The players of the Houston Astros embraced this, and played with a lot of passion in order to win what was, according to many opinions, the greatest single World Series of all time.

I caught up with avid baseball fan Michael Frogge who told me, “Ya know, Farwick, I wanted the Dodgers to win, but I guess Houston is alright.”

During this World Series, the Astros had a lot of veterans, who were longing for a World Series title, and the Hurricane set the stage for them to put the city on their back and bring some happiness and true joy back to the city.

The crowds pulled in by Houston during this run were incredible too. The people took time away from their messed up houses and came together to cheer on their hometown team.

This World Series was loaded with young talent. Many were from the Dodgers in Yasiel Puig, Cody Bellinger, Joc Pederson, Corey Seager. But the Astros had some of their own in George Springer, Carlos Correa, Alex Bregman, and Jose Altuve. I heard Joe Buck say that if the Astros were going to win the World Series this year had to be the year. He said the city really needs it.  But he does not think they are built for long term success, considering they had older guys on the roster. He continued to say that the Dodgers should not be that worried if they do not win this season because they are built to be successful for years to come.

Some of the all-star veterans who had never won a World Series but deserved one include: Brian McCann, Justin Verlander, and Carlos Beltran. All three of these guys have been consistently great players over their careers, and all deserve a World Series ring.

After all this, I think we can all learn how much people can come together around sports teams after a major disaster. It never ceases to amaze me what kind of impact a simple game can have on an entire city. Thank you, baseball.