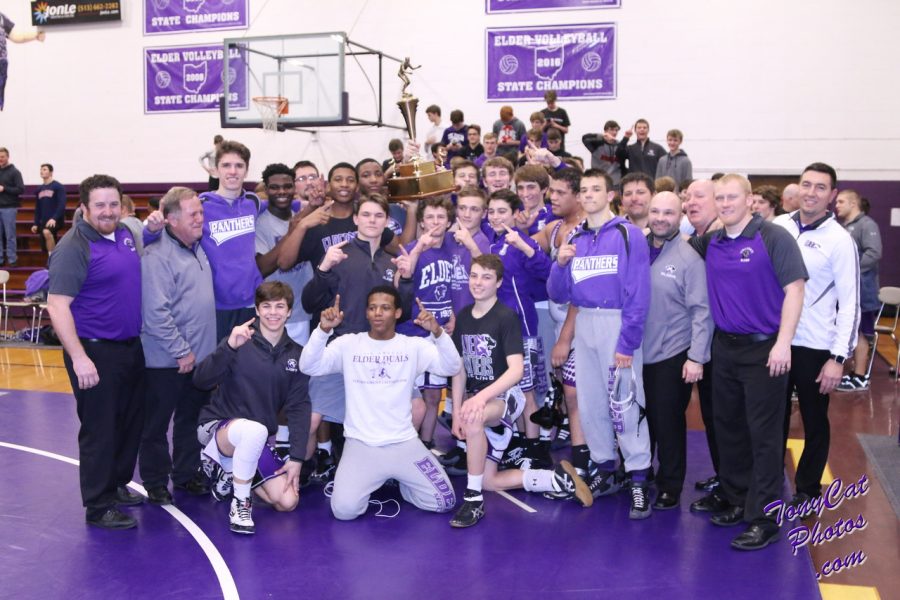 “What I had I gave. What I saved I lost, forever.” This is the quote that resides prominently in the wrestling gym overlooking each practice and match

After a very successful season last year for Elder wrestling, the Panthers look to make a run for another great season.

Elder wrestling has been one of the most successful programs in Elder history. Over the past couple of years, they’ve had multiple state qualifiers, placers, sectional and district championships, including two consecutive GCL championships under head coach Jason Roush.

Going into his fifth year coaching for Elder, Roush has had a lot of success so far for the Elder Wrestling program and he looks forward for what’s to come this year.

“I’m really excited about it! Season starts Friday (11/9), we have nine returning starters, four state qualifiers, three state placers, and we finished the season last year nationally ranked so are really excited for what this one has in store. Our senior class is very successful and I look forward for what they can do this year,” Roush said.

Roush also clarified that senior Austin Murphy, whose been dealing a knee injury all offseason, is hopefully expected to return this season.

“He sprained his MCL and had surgery on the same knee last spring and just needs to be cautious on it for now. But he should be fine,” Roush stated.

The Panthers biggest tournaments this year include the Iron Man at Walsh Jesuit up in Cleveland which is the newest one on the schedule. The tournament is referred to as one of the toughest in the country and it takes place the first week of December. In addition, they’ll have the Coaches Classic at Harrison, the CIT up in Cleveland, GCL, and duals against Fairfield, Oak Hills, and more.

I also caught up with senior Chucky Lipps, a three year varsity starter to ask about what he looks forward to for this upcoming season.

“I have high hopes that it’s going to be a great year. Eight seniors are in the lineup and our freshmen look pretty good. We’re hoping to win GCL again this year along with with sectionals, district, and our long time goal of winning state. We finished last season nationally ranked and currently unranked going into this season so we look forward to surprising many people. Personally, I just want to get after it this year and place at every tournament and wrestle as long as I possibly can this year. We as a team our eager to succeed in mankind’s most brutal sport,” Chucky told me.

With that being said, Elder Wrestling has high expectations for this year. Along with guys like Chucky and Austin, other guys to keep an eye throughout the year include Charles Sanders, Alec Moore Nash, Antonio McCloud, Austin Belcher, and many others as well.