Where will FCC’s new stadium be? 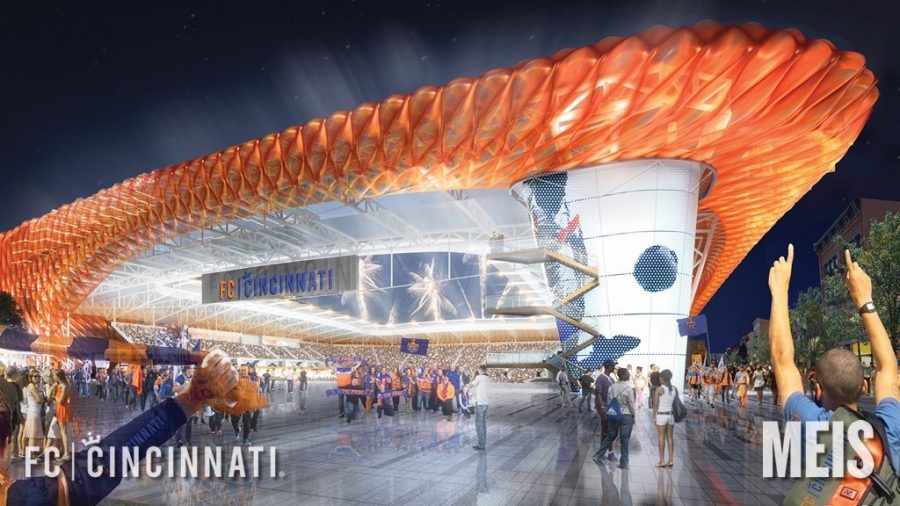 Senior and FCC fan Jack Sunderman would love the new stadium to be built as soon as possible. “I think it’s a great idea. It’ll bring a lot of money to whatever area it goes to… I already got a look at the stadium, and now I want it built just because it looks cool. I understand it’s a lot of money, but I think the state should get some money back from it once we start making money off of it,” said Sunderman.

There are other people that wish they could just stay at Nippert. Everyone realizes that FCC needs the new stadium to join MLS, but some people would rather have FCC stay in USL and stay in Nippert. “I like it at Nippert… I just still don’t know if I want FC Cincinnati to be MLS… Nippert is pretty cool… It has been a lot of fun with all the pubs around there and marching into the stadium,” said teacher and soccer fan Mr. Weinheimer.

The main reason this stadium is being built is FCC wants to be in the MLS. The MLS wants teams to have soccer specific stadiums to be admitted to the MLS. Sunderman and many others are very excited about FCC movie to MLS; however, not everyone is as excited about it.

Mr. Weinheimer said, “I’m kind of torn on whether I want them to be an MLS team. It would be cool. It would be awesome to see some of the MLS clubs come in… I worry about ticket prices. I won’t be able to go to so many.”

Mr. Bengel, another Elder teacher, is also worried about the rise in ticket prices if FCC moves to MLS. “I think you could see a drop in attendance when the ticket prices change to MLS prices when the newness wears off,” said Mr. Bengel.

The plan of where the stadium is going to be in still in question. Some people want it to remain in Cincinnati. “I know Oakley doesn’t really want it because the traffic is horrible there. I certainly don’t mind having the stadium in Oakley… If the Linder’s are going to pay for the stadium, I certainly have no problem with Cincinnati paying for the infrastructure,” said Mr. Weinheimer.

Other people would be fine with or even want Newport. Sunderman and Bengel are both proponents of Newport. Sunderman said, “I think it’d be cool in Newport. I don’t know if I like it being in Kentucky because of the whole FC Cincinnati thing, but I think it’d be a great area for it, and they already have the money put up for it. I think Newport would be better. They got some parking down there. It’s a good area.  Newport already has bars and restaurants which will help bring people down before games.”

Mr. Bengel went on to say that it would be better for both cities. It would bring both cities an economic boom while bringing both cities together as a region. It would save Cincinnati a lot of money, and Newport would have to spend less money than Cincinnati on infrastructure because Newport already has the infrastructure. They just need to spend a little money to repair it to make sure it is ready for a MLS crowd.

Mr. Bengel also had another big idea. “A lot of people think this is going to be a bait and switch stadium deal. FCC is going to tell MLS the stadium is going to be in Oakley until it is approved. Then once they get approved for the final two, they pick a different location.”

As an FCC fan, I would love to see FCC in the MLS. I’m going to go to games no matter where it is even thought I would prefer it to remain in Cincinnati. I agree with Mr. Bengel that this may be being rushed, but I would also like the plan to get approved soon, so we can be a part of the next MLS expansion. I want FCC to get a stadium, and I think they are going to get it. I also think Cincinnati and Nashville will be the two expansion teams in December. I am just wondering where the stadium will actually be.