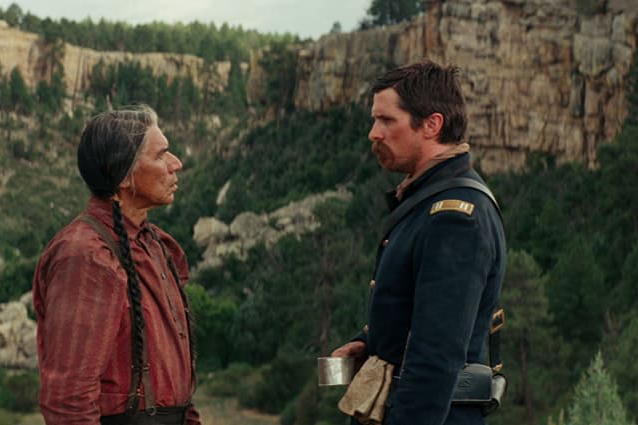 Out on the outskirts of New Mexico, lives a pretty typical horse farmer with his family. They live out on a reserve far from any civilization, the land was just their own and the horses. Their lives shortly changed as the opening scene involves an entire tribe of savages riding toward this family ferociously. This little house on the prairie was about to take a dramatic change as Hostiles begins.

Hostiles, the latest cowboy, western film, was directed and produced by Scott Cooper. This movie involves an Army Ranger who is asked to take a Native American tribe back to their home of Montana after being imprisoned for years at Fort Berringer.

The leader of the quest is none other than Captain Joseph Blocker, a quiet ranger with a chip on his shoulder, played by Christian Bale. The movie keeps viewers on the edge of their seats through the entirety of the film as each scene could change drastically within a blink of an eye. The action packed film is filled with constant rivalry from the opening credits until the closing scene.

The movie pulled at the emotions of viewers in the very beginning as the movie started off with a blend of traumatic events, as each character has her or his own burden to carry. The movie strayed from the norms of most films as the main character lacked clarity in his mumbled words almost every time that he spoke. Hostiles also expressed how some of the US Army had harshly treated Native Americans in the past.

The main character, Joseph Blocker, is a pretty notable captain at Fort Berringer headed towards his retirement. Joseph is immediately hit with a challenge when he is asked to take Cheyenne Chief Yellow Hawk back to his home to give him a proper burial.

Blocker is perplexed when asked because he has a reason to dislike Yellow Hawk. Blocker witnessed Yellow Hawk brutally murder one of his good friends and has been warring with the Cheyenne tribe his entire life. He still intends to avenge the life of his friend and as a result makes Yellow Hawk’s journey somewhat miserable by keeping him and his family chained for the majority of the ride. The Captain changes drastically after the group has a few encounters with the Comanche, a tribe portrayed as a herd of ruthless savages out for blood. Joseph’s character transformation through the movie is a night and day difference.

Along Blocker’s venture to Montana he runs into a young widow woman by the name of Rosalie Quaid. Quaid struggles with the loss of her husband and children, she begins to slip from her state of mental well being and must go through the journey traveling with her fear of the Native American tribe who had viciously murdered her family. From start to finish, Rosalie also finds herself transforming from one who feared Native Americans to one who grew to have a strong bond with them.

The Cheyenne tribe also play a major part in this film. With all of the reasons to be hateful towards the American people, they seem to be unlike what they were in the past and are a very peaceful tribe, even looking out for the Americans. Though there was tension in the past, they seem to be friendly and have changed with their journey back to Montana. They become close companions by the end of the journey.

The movie stayed true to its historical content throughout, scenes were shot in the actual places and filming was often stopped due to rain. The cast wore costumes made of wool so many times the filming was a drag and very hot throughout. These two factors added to the content of the movie overall.

In all, I thought the movie was very well produced and overall a good picture. I would definitely recommend it.