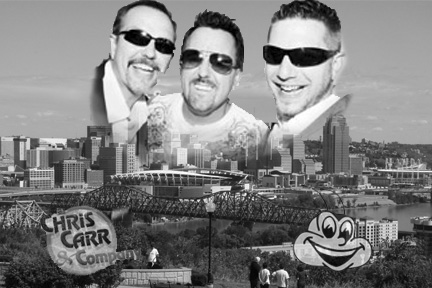 A morning car ride in Cincinnati is never complete without turning the radio dial to 105.1 FM.  B-105 specializes in the country music genre, and they are also known for sponsoring the Megaticket, which is the all-access pass to the summer concert series at Riverbend.  This radio station is home to one of the best radio shows in the country.

Chris Carr and Company came to the airwaves in Cincinnati five years ago when B-105 brought the broadcasting talents of Chris Carr, Jeff “Maverick” Bolen, and Jason Statt together.  Chris Carr was not a Cincinnati resident before they took the Tri-State’s radio towers by storm.  Carr came from Minneapolis to create the show, and the listeners in Cincinnati are very happy that he made the move down to the Queen City.

Chris Carr and Company won the Academy of Country Music’s “On-Air Personality of the Year – Large Market” award in both 2010 and 2012. They have also been nominated a handful of other times for the same award.  These award winning hosts wake up early every morning for the show’s start time of 5:00 AM, and they keep going strong until 10:00 AM.

The show’s popularity has been growing ever since the show’s creation in 2008. The show is a fun and entertaining way to give the traffic-jam sitters of Cincinnati a good laugh, and a much more enjoyable ride to work.  The shows hours also coincide with high school students’ drive to school.

Chris Carr and Company tackles topic after topic every morning.  The topics range from serious issues to hilarious inquiries that come from real-life instances or experiences.  The show is very listener friendly, so each topic has input from numerous Tri-State callers.  The ability of the hosts to feed off the callers’ comments has added to the show’s popularity.  Chris Carr always adds the final word to every call-in, and that normally gets Maverick and Statt’s distinctive laughs going.

Sophomore Kyle Kroeger is a fan of the men behind the microphones.  He said, “They are just some guys having fun for a living, and their prank calls are hilarious.”

The show has had a great response from high school students in the area.  Chris Carr thinks that many students like their morning show.

He said, “We talk about a lot of things they talk about, including some of the dumb things their parents do on a regular basis. We are very playful and like to cut up and just have fun!”

The show also has a good mix of music and talk in the morning.  Many of the stations in Cincinnati are either all talk or all music while students are on the journey to school.  Chris Carr and Company has created a good balance between the two, so students normally hear both during the trek to school.  They also have many ticket giveaways for country music concerts in the area.

Senior Jimmy Dirr is one of Chris Carr and Company’s many listeners.  He really likes the morning show, and he said, “It keeps me entertained while driving to school.  They have some funny bits as well as some serious talks that really just make my morning better.”

They also have a unique feature to their show, The Simple Survey.  Chris Carr calls an unexpected victim as a surveyor for the United Bureau of Surveys.  He asks questions that he and Maverick come up with. They range from simple questions of how many people live in the person’s house to random questions like how many licks does the person believe takes to get to the center of a Tootsie Pop.

Carr remembered one of his favorite Simple Surveys that he conducted. “I think we all agree that when we called the guy and asked him to turn on all of his appliances and his circuit breaker blew, only for him to go out to the garage to flip it back on and he got locked out of his house.”

Chris Carr and Company keeps a buzz of laughter floating in the Cincinnati area during the five hour broadcast every morning.  Thankfully they came together in Cincinnati because if not, the car ride to work and school would not be nearly as entertaining.