Football is more then just a game to Spencer Bono. 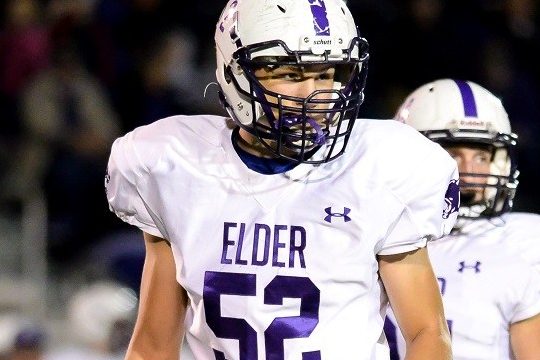 Bono during his sophomore season which he put up 20 tackles, 23 assisted tackles, two forced fumbles, and 6.0 sacks

One of Elder’s finest students and football players has made a huge decision for his future. The two year defensive end starter for Elder varsity football Spencer Bono, announced on Twitter that he has verbally committed to Boston College.

Bono was born and raised on the Westside of Cincinnati. He went to St. Jude before he decided to come to Elder. Bono has been playing football as long as he can remember. One of his biggest influences growing up is his family, especially his dad.

“My dad has always taught me to play hard, especially through football. Coach Eisele has also taught me a lot, working with him has made me the player I am today.”

For Bono, football is not just a game. It has taught him many life lessons as sports usually do along the way. Sports are known to help people grow as individuals, not just on the field.

“Football has taught me how to never give up when times are hard. It has also taught me perseverance and how to become a better leader through the game.”

Starting as a sophomore at Elder is very tough to do. Excelling as a sophomore is even tougher to do. As a sophomore, Bono put up 20 tackles, 23 assisted tackles, two forced fumbles, and 6.0 sacks. He was part of a talented d-line with Devon Slocum and Darnell Dawson. Bono was awarded honorable mention all-city for the Enquirer.

This past football season, Bono had 40 tackles, 7 sacks, 13 tackles for a loss, three blocked pass, 2 forced fumbles and had 3 fumble recoveries. He was awarded the Enquirer’s all city team, GCL first team defense, and was named the team’s best defensive lineman.

Bono has been a target for many D-1 schools since he was a sophomore. A few weeks ago, he decided that Massachusetts was the place to go and verbally committed to Boston College.

Bono, who had offers from UC, Iowa, Maryland, Rutgers, Kent State, and others, felt like Boston College was the right fit for him for athletics and academics.

“There aren’t many other schools where you can get a top education and where it is in a top power five football conference. There are so many influences and connections from Elder to Boston College. Ricky Brown (former NFL player and current Boston College coach) is considered a role model for me because he went to Elder. Boston College is also a good fit for me because they have an excellent business program that I am interested in.”

However, Bono is looking forward to one last season at Elder High School. The Panthers have big plans this year after having a good season last year, just  barely missing the playoffs.

Bono is already setting the bar high for goals, which include an outright GCL championship, a state championship, undefeated season in the Pit, GCL lineman of the year, and to break the sack record.

These goals are very possible with the young but experienced 2019 class. The schedule is tough as usual, but it includes seven home games at the Pit. The Panthers will have the LaSalle Lancers and the St. Xavier Bombers in the Pit. The first game of the year is against Gahanna Lincoln home at Elder.

In the spring time, Bono shifts his focus to track and field. Bono is new to the sport of track, but he does not back down to the challenge according to teammate Luke Mastruserio.

“Well I’ve known Spencer since he joined track and it was a foreign sport to Bono. It was cool to know that he kept on trying and trying because it is not any easy sport.”

Bono also said he would like to get bigger and stronger. Along with football lifting and track, Bono has also recently picked up boxing to build up strength and endurance. He participates in boxing twice a week.

As a two year football manger, I see the process beyond the Friday nights. Spencer is a person that will never give up on a challenge and will always give it his best. Spencer has the determination that not many people have on the field.

However, before he continues his quest to Chestnut Hill, there is still some work to do in Price Hill. Bono and the Panthers will try to reach for a GCL championship. But after Elder, the Boston College Eagles will be getting a very good player and an even better person.