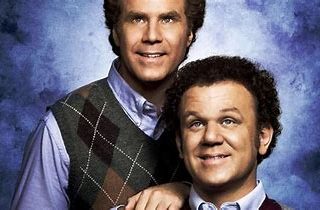 Imagine living at home with your parents when you’re 40 years old and all of a sudden you find someone that is exactly the same person as you.

That is the gist of the movie Step Brothers.

Brennan and Dale are two step brothers that are both 40 years old and living at home. It is actually awesome how their parents married each other because it was already weird enough. Brennan’s nickname is Nighthawk and Dale’s is Dragon; that’s all you need to know. This is the best comedy movie of all time so let’s get ready to rumble.

The main story of this movie is that Brennan and his mom move in with Dale and his Dad and at first Dale and Brennan hate each other. Eventually, they both grow on each other and share a lot of the same interests. They both love karate in the garage and they both love velociraptors. They become best friends and really help each other mature and start their own lives.

The big thing that was unique about this show was the fact that there were two adults, living with their parents at 40 years old. They are hilarious in what they are passionate about; they love Shark Week. They actually both have unreal talents that’d you’d never expect by the way they act. Brennan has been called the songbird of his generation and Dale can rock the drums like no other.

The main characters are obviously Brennan and Dale in which every scene revolves around. Brennan loves everything that Dale does and same with Dale towards Brennan. They hate each other at first calling each other curly headed blanks. They both go to an interview in what I think was the best part of the movie. They say they’re there to **** **** up. They also make a music video on Dale’s dads boat as Brennan calls him Mr. Doback, and oh yeah, they crash it.

The supporting characters are obviously the parents. They deal with their sons’ immaturity, while staying loving towards one another at least for the most part. Robert, the father of Dale ends up getting in a fight with them and its great. The other supporting character that makes the movie great is Derek. He is Brennan’s real brother who is a complete douche. You’ll have to watch it to understand.

The tech on this movie is great. The start of the movie when Dale and Brennan meet for the first time is awesome because there are letters that come in from so many different ways that spell Nighthawk and Dragon and the theme music is great.

Also another great tech part is when they shoot the video of them singing their song on the boat at Derek’s birthday. The greatest part that involved this though was when Derek was trying to sell the house.

This is my favorite movie of all time.

Every time I’m with my friends we have to watch it because it gets us every time and it reminds us of ourselves. Two 40-year-old legends that move in together and have the time of their lives. They start a band which is awesome and they’re actually really good. This is a must watch movie. I mean how can you not laugh at two 40 year olds asking to build bunk beds.