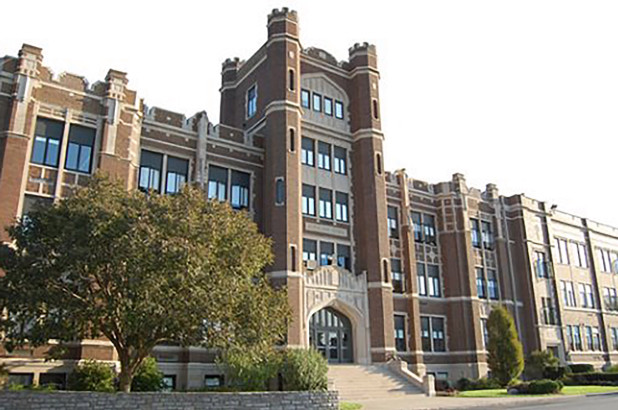 New people come to Elder every year to be a part of the Elder family tradition.

They get a chance to know what it feels like to wear the purple and white.

This year there are a total of five new Panther teachers who have joined the Elder nation.  The new teachers are Scott Schaerer, Mindy Roy, Matt Walhert, Nate Brown, Daniel Mohs.  I sat down with each teacher and got to know a little bit about each one.
Scott Schaerer, Religion
Scott Schaerer was an eighth grade teacher at Our Lady of Visitation before he came to Elder.  He taught social studies along with religion.  He misses being able to see his kids at Visi everyday while he taught, but he still gets to see his oldest here at Elder.  Mr. Schaerer said, that there are not a lot of big differences between here and his old job, except the class sizes and amount of students.  In final he said, “Being a teacher at Elder succeeds my goal that I have now accomplished.”  He is blessed to be here.  “This is a really great place to be.”
Mindy Roy, Accounting and Personal Finance
Mindy Roy came from her old school in Covington, Kentucky.  There she taught Accounting and Marketing along with other courses.  At Elder she teaches Accounting along with a few classes in Personal Finance.

At Elder, she says the students are a lot more respectful and engaged in class.  It does not take her a lot to get their attention and make them show her respect. She said it is just natural for them.  In her first month of a new school, she loves the amount of school spirit that the student body shows in and outside the classroom.


Dr. Matt Walhert, Government
The next teacher I was able to sit down and talk with was Dr. Matt Walhert.  Dr. Walhert came from a school in Kentucky where he has been teaching for seventeen years.  He also teaches class at Miami University in Oxford, Ohio.  For him the differences are big.  At Elder there are no girls; his old school and current school were and are coed.  Some class sizes are bigger than others, along with that, the atmosphere is way different than what he is used to.  He also said that there is a lot more freedom here than his old school, St. Henry in Kentucky.  At St. Henry, he said they had something called a “sign-out sheet”.  For him coming to Elder, our school motto Altiora was what attracted him.  He said that he thought the motto was over sold, but when he got the job, and realized the true meaning of the motto, now he says it is “under sold.”
Mr. Nate Brown, English and Baseball
Mr. Brown’s interview was interesting.  He is a coach here at Elder.  He told me that there are some big differences from being on the field and going into the classroom.  For coaching, respect is not earned it is already there.  Plus you do not have to keep them engaged, they came here to do what they love.  As for a classroom, he has to keep his students engaged along with keeping them motivated.

Coaching at Elder is one of his favorite things to do.  In the future he wants to coach for a college, and be able to make a career out of it.  As for being a teacher, he taught at Cincinnati Public before coming to Elder.  He taught all types of people from all over the world, ranging from Vietnam to West Africa.  It is safe to say that he is happy to be back at Elder.
Mr. Daniel Mohs, Math and JV Football
For my final interview I sat down with junior varsity coach Daniel Mohs.  He came from North College Hill where he taught for three years before coming back to work at his alma mater.  North College Hill had some differences.

It was a public school, it had smaller classes and a smaller school.  He taught four classes at NCH.  He said, “The students on the field and in the classroom are both hardworking and respectful.”  There is no problem with him getting respect from his team or his students.