The NFL ties need to go

Every NFL game should end with a winner and a loser. 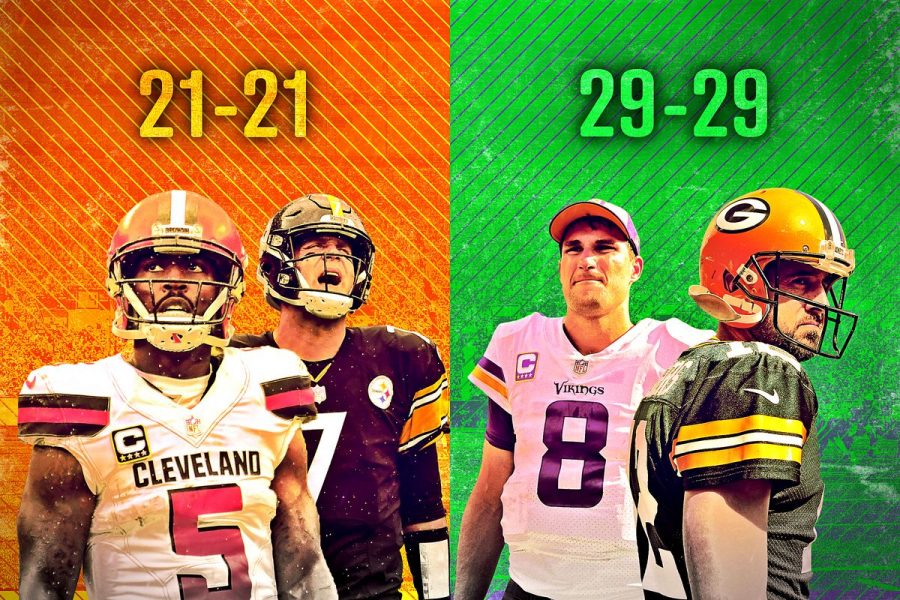 The NFL has just finished week four of the season and their has already been two ties. That is completely unheard of because in the NFL ties are so rare.

In fact, some NFL players didn’t even know that you can tie in the NFL. Terrell Edmunds was one of those players. After the Browns and Steelers tied in week one of this season, Steelers player, Terrell Edmunds said, “Honestly, at one point, I was like, Ok, I’m ready to go back out. Let’s get right. Let’s go stop them. Every other Steelers player on defense said it’s just a tie and it’s over.

This shows that games in the NFL should no longer end it ties. The fact that some rookies in the NFL this year who have been in a tie game didn’t even know before they tied that you can tie in an NFL game is crazy. They should change the rule in some fashion so that every NFL game has to end in someone winning and someone losing because that is how it is supposed to be.

After the Browns – Steelers game that ended in a 21-21 tie, Browns starting safety, Jabril Peppers said, “There’s no way that we shouldn’t have won this game. We didn’t win. It is all about winning. Nobody cares about draws or ties, whatever you guys call it.”

This shows that there shouldn’t be ties because some NFL players would rather lose than have a tie because it is all about winning to them. This game was really important because it was a divisional game.

Then in week two of the NFL season the Packers vs Vikings game also ended in a 29-29 tie. This game was also a divisional game like the other tie in week one. Kirk Cousins said, “I don’t know what to feel after a tie. It was a great game, but unfortunately we didn’t get the win.” It is crazy how NFL players don’t know how to feel about a tie because they didn’t and they didn’t lose.

When the Packer’s kicker, Mason Crosby, was asked after the game about the tie vs the Vikings he said, “It’s gross. I don’t like it. Obviously, you hate losing. A tie is just weird. You just don’t get them a lot.” Ties in NFL games are just so weird to the players because they are used to either winning or losing.

Overall, it is clear that ties need to go in NFL games. Having two ties in the NFL this year has made players really think of what they feel after it happens. If the rule got changed to games going till someone wins, it will be better off for the NFL, the players, and the fans. It will be better off for them because there will be a winner and there will be a loser and teams are just going to have to deal with it.