Sitting down with Mr. Pieper 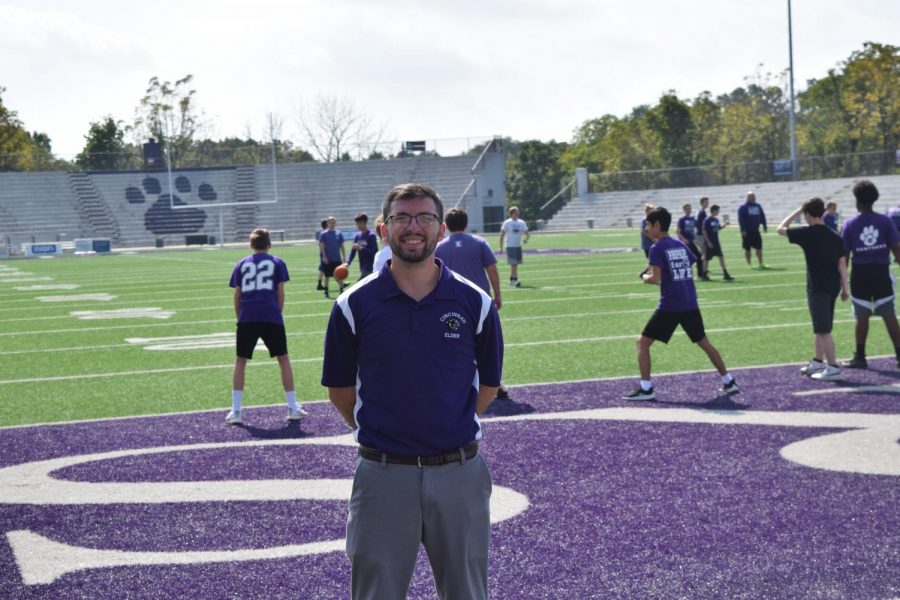 Mr. Joe Pieper ‘13, aka “Peeps”, is in his second year as Admissions Coordinator at Elder. Many students pass him by in the Admissions Center while he is sitting in his little office in the main hallway. However, many do not actually know Pieper.

Pieper was involved cross country, track and glee club during his time as a Panther. He said that some of his most fun experiences at Elder were being part of the glee club. “Singing in Germany, Austria and Italy was exhilarating being with my friends overseas,” said Pieper.

He really enjoyed being a part of the cross country team at Elder. His freshman and sophomore teams were the last two teams to qualify for state. “Hearing Elder on the microphone signifying that we had qualified was thrilling. Being an underclassman, I did not run upstate, but I was still excited for my teammates.”

He attended the University of Cincinnati in the fall of 2013. In his time as a Bearcat, he worked with the football team as a student assistant. Basically, he shot videos of practice and games that coaches would use for practice and film sessions.

He said, “It was really cool to be around the football team because I traveled with them and got a ton of free gear. It was a win-win situation because I enjoyed doing what I did and got scholarship money in exchange.

Pieper, graduating with a marketing major in the winter of 2016, began his search for a job.

Pieper started out of college at a company called Total Quality Logistics for six months. While asking him about his time there, he said. “It was exciting at first because just getting out of college everyone is giddy and eager. But soon after I began, I realized that it sucked and I was not enjoying it.”

Pieper quit his job there on a Tuesday and started the hunt for a job he would love. He applied for the position he has now at Elder.

“I quit on Tuesday, applied for the job at Elder on Tuesday night and interviewed here on the following Friday,” said Pieper. “The following Monday I started here and the rest is history.”

In his first year, he had his plate full with open house and scheduling shadow days.  “Open house was definitely the highlight of my first year,” said Pieper. “There was a lot of pressure on me and our whole program because it is what we work for during the year.”

Another one of his favorite experiences in his first year was Elderfest. “Participating in my first Elderfest as a part of the faculty-student basketball game was extremely fun. Playing some gritty defense against the seniors was thrilling. Although I only hit one three-pointer in the contest, my presence was definitely felt,” he said.

Pieper is looking forward to next year’s competition against the seniors. He also really enjoyed participating in the Mark Klusman Day of Service.

He said, “It was such a fitting way to honor the ultimate Elder man, Mr. Klusman. I look forward to it again this year.”

Later, he talked about some of his hobbies outside of Elder. He said, “I am a huge baseball guy. I don’t play too often, but I enjoy to read articles on the sport and stay updated. Basically, I am a sports fanatic. When I am not working, I sit at my desk and read sports stories and articles.”

Pieper is interested in more than just sports; he has a passion for music. During his four years here, he was in the glee club. He still enjoys listening to music and going to concerts.

In sum, Pieper may have the title of a faculty member, but he has the same areas of interest of most of us students. Peeps is a great guy and very good at his job here at Elder. I strongly recommend that you get to know him because he is just another one of the great faculty at this fine institution.