What’s really in your food? 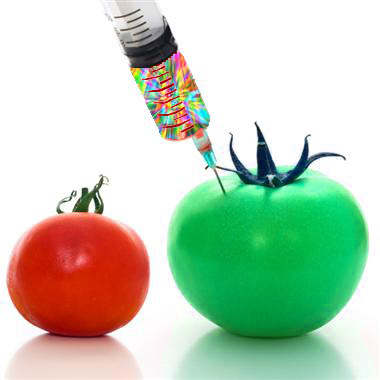 The amount of food consumed around the world reaches a new peak each year. The average American does not ask  where exactly the food comes from or how it was grown; they just expect their favorite foods to appear on the shelves of their local supermarket. However, it should be of great interest as to how farms are able to cope with an increased quota on the same acreage of land.

New technology has allowed scientists to create genetically modified foods, better known at GM foods, that allow animals and plants to grow faster, stay healthy, and produce more. In the past two decades, these GM foods have been created and commercially sold. Examples of such food would be: Tomatoes, corn, salmon, etc.

How are they created? Biologists have learned that they can fuse a gene from one organism with another to introduce desirable traits into the genetic make-up of plants or animals. Examples may be pigs being genetically modified to produce less phosphorus in their manure by adding in E. Coli bacteria and mouse DNA to a pig embryo. Also, Scientists have created venomous cabbage by adding the genes from scorpions that secretes poison. This makes it harmful to eat for caterpillars and other insects but is modified to remain safe for human consumption.

Many crops and animals have been modified in this way to increase production which is advantageous to humans. With increased inventory, a decrease in price is sure to come based on the well-known business model of supply and demand. Lowered prices make the food more available for the lower class and may help to reduce hunger around the world.

Foods can also be genetically modified to be more nutritious. This serves as a major benefit to countries in other parts of the world that may be deficient of certain vitamins. For example, golden rice is white rice that has been adjusted to have a higher concentration of vitamin A. These advancements may help to lighten the issue of malnutrition.

Although GM food is a huge benefit to our society, a lack of trust has created controversy  amongst skeptics of the idea. GM foods that are on the shelves of grocery stores have been tested and are not considered harmful, but it is unknown what could happen in the future. Many consumers are worried that it could lead to cancer and potentially harm future generations. People who eat GM foods, which most people do, are essentially serving as test rats for their product. The risks may be low for serious damage to one’s health, but certain people feel it is better to play it safe.

U.S. citizens are also very skeptical of GM foods because the GMOs are not put on nutrition labels. They say it is our right to know what we put in our bodies. In Europe, all GMOs are put on the label and people are questioning why we don’t do the same.

Along with the health concerns of genetically modified food, farmers are making less money due to the overproduction of crops. Because of the more than adequate supply, the price drops significantly. Cheaper food may be good for the consumer, but it decreases profits made by farmers.  One initiative the government has taken to prevent this inflation is giving out farm subsidies.  The government pays farmers an amount of annual profit to not grow and harvest their crops. This prevents overproduction of certain crops and keeps them at a regulated price.

In the end, it comes down to opinion whether this is right or not. From better nutrition to cheaper food, genetically modified foods have helped in many ways, but some people can’t get around the fact that the food they are eating was created in a lab.