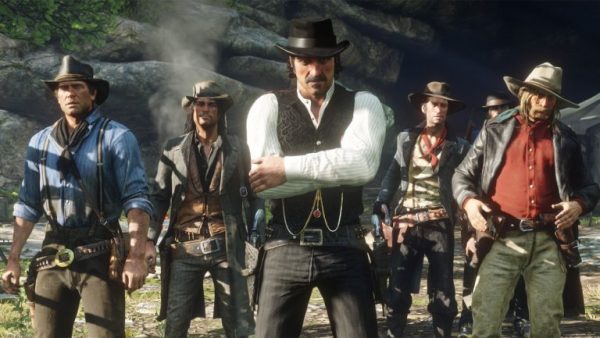 The following is a description and review of the new Red Dead Redemption. It contains information about the game without the story-line being spoiled. Enjoy.

Red Dead Redemption 2 is a sprawling Western tale of loyalty, conviction, and the price of infamy, chronicling the inevitable collapse of a motley crew of Wild West holdouts kicking against the slow march of civilization and industrialization as described by IGN. RDR2 is Rockstar Games best work to date.

The game starts out in 1899 when American outlaws are an endangered species. Dutch van der Linde and his gang are on the run after a botched heist in the small town of Blackwater. Fans of the original will remember Dutch van der Linde, the leader of his eponymous gang, as the primary antagonist in a story about the last days of the Wild West frontier. The gang has retreated to the mountains where a monstrous blizzard aids their escape. Here we are introduced to the main character, Arthur Morgan. Arthur has been Dutch’s most dependable and capable enforcer since he was a boy; the outlaw life is all Arthur has ever known. He is sharp, cool‐headed and ruthless, but with his own sense of honor. Simply, he is a man who gets the job done. He is the player’s right hand man throughout the entire 60 hours of game play. Here is what you can expect.

First, the map is enormous. It is like nothing we have ever seen before. IGN goes into depth on all the attributes of Rockstar’s masterpiece map: “There are snowy peaks and dank, alligator-infested swamps. Thick forests and open plateaus. Quaint homesteads and grand plantations. Narrow streams and great lakes. Dusty gulches and dim caves. There’s the muddy livestock town of Valentine, with its wooden buildings and rustic charm, and then there’s the imposing city of Saint Denis, a grimy and growing metropolis full of modern extravagances like electric trams, paved roads, and Chinese restaurants. The vast assortment of ecosystems and environments seamlessly stitched together here is nothing short of remarkable.”

Even throughout the 60 hour storyline, the game never gets boring. Players are constantly introduced to new settings and situations. A major aspect of the game is money. Because it is the Wild West, money is not easy to come by. From robberies to hunting and selling legendary animal skins, a thousand dollars can go a long way in the game. You can find lock boxes throughout the map containing two gold bricks which sell for $500 apiece. If you don’t care about staying true to the game, and you want to turn that $1,000 into $15,000, check out the money glitch below.

I discussed the game with two students who have had RDR2 since its debut, Liam Geiser and Willard Cluxton.

Now, Liam is considered a noob by his peers. The king of video games perhaps. “So far I love the game. I really like that it is 60 hours of in mission game play because I usually beat these types of games in about a day,” said Geiser. Willard, an ardent fan of Rocktar’s last masterpiece GTA V, says Red Dead is the most detailed and in depth game he has ever played.

Personally the most fascinating aspect of the game has to be facial hair. In Grand Theft Auto V, the player could go to the barber with a clean shave and purchase a full beard, but in RDR2, once you shave you have to wait until it grows back. It is unfathomably realistic.

“My favorite part is probably petting stray dogs or interacting with my horse,” exclaimed Willard. it is basically a dog petting simulator. If that does not make you happy, then I don’t know what will.

Overall, Liam and Willard both agreed that Read Dead Redemption 2 will go down as one of the greatest games ever. Ten out of ten thumbs up.