Panthers that make the trek to Price Hill 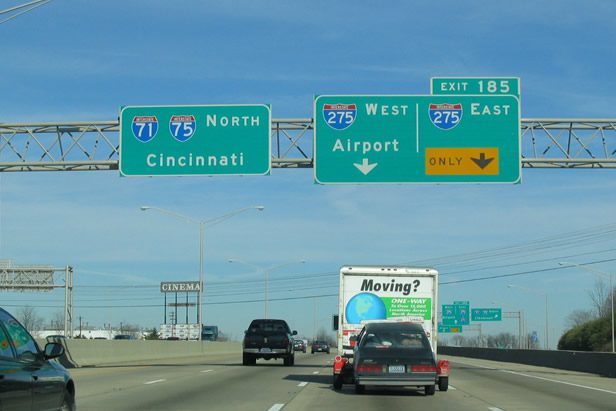 The student body of Elder is composed of a wide variety of kids from parishes all over the western portion of Cincinnati. However, there are a few students who push the boundaries of where the Panthers come.

Personally, I am one of those students, driving an average of 50 minutes to Elder from Fairfield. It has been nothing short of a unique experience driving so far over the past four years during my enrollment at Elder. I wanted to talk with a few students who also drive a long distance to be a Panther in order to find out what they think of the drive.

My first chat was with Vince Crump, a sophomore at Elder and member of the lacrosse team. Vince was the first person I thought because of his statement of, “traffic was terrible on 275” whenever he’s late to Saturday morning lacrosse practices.

“I live in West Harrison right across the state line,” Crump simply explained. He told me that on average, it takes about 45 minutes to get to school, about the same time it takes me to get to Elder.

“At first it kind of sucked because you just want to get home quickly after school, but I actually enjoy the drive now,” Vince stated.

“I think the drive is definitely worth it. Elder is great, everybody seems to enjoy going to class,” Crump explained. Vince still has a couple more years to go until he no longer has to worry about the three quarter of an hour drive just to get to school.

Jonathan Quatman was the next person on my list for long commuters. I got to speak with Quatman for a moment in between classes. John is a sophomore at Elder and is a part of the Cross Country team.

“My dad lives in Newport, Kentucky, and my mom lives in White Oak, so wherever I am it’s a pretty decent drive to school,” John said. “I like driving in from across the river because I get to see downtown in the morning with the sunrise coming up behind the skyline. It’s really cool,” Quatman said.

“At first I didn’t really think about going to Elder too much because it’s not exactly the closest to where I live, but it turned out to be good because of how it splits the distance of both Newport and White Oak,” Jonathan said. He then told me that Elder so far has been a great high school experience, saying the football games on Fridays in the pit are the best.

The last person I spoke with was Andrew Sander. Sander is a junior coming in from Oakeana, Ohio and is a member of both the Cross Country squad and the track team.

“Nobody really knows where Oakeana is so I just say Harrison since its essentially right down the road five minutes from us,” Andrew said. “I never really think about the drive, it’s nice to relax on the drive home from school. I’m used to it,” Sander explained.

He then went on to say that the only downside to traveling for to school is that he lives a far distance from all the friends he has from school. This is an issue I also have.

When looking at the origins of Elder’s student body, it definitely not only made up of children from parishes only on the west side. Kids from all over the greater Cincinnati area have been known to drive from far and wide in order to be a Panther.