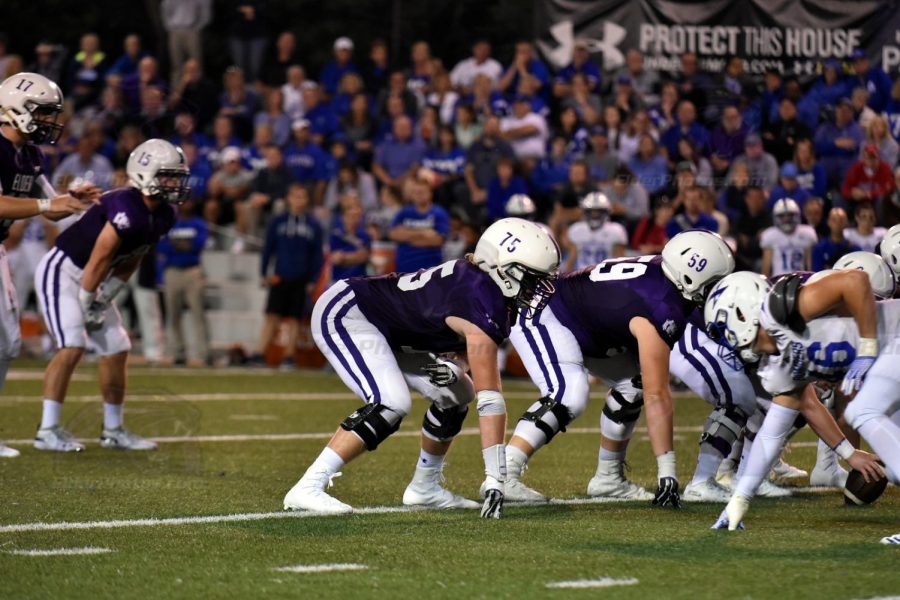 Smith lines up against St. Xavier

One of Elder’s most bold looks may be changing soon. Junior Carter Smith’s long blond hair is in danger of being cut, and time is running out.

The long, flowing blond hair looks like a golden waterfall rolling out of the back of his head, and has been Carter’s identity for much of recent memory. “It’s been a long time. I’ve been growing it out for over a year now.” said Smith.

Carter thought the long hair was a cool look, so he went for it, and has not looked back ever since. “If I thought it looked horrible I would never have started to grow it out,” said Carter.

When I asked him how people perceive his hairstyle he said, “Some people are fans but some people aren’t. But normally the compliments come from the ladies.”

The reason behind this reality is due to Carter’s mediocrity in fantasy football. The loser of Carter’s league must get a buzz haircut, and it just so happens that Carter currently sits in last place. Smith has grinded out one win in eleven weeks of fantasy so far.

“I thought [the punishment] was pretty funny, but I had no idea I would be the one that would lose. I thought my team was pretty decent.” Things went downhill pretty fast for Carter, to his surprise.

He made the fateful decision of selecting Steelers’ running back Le’Veon Bell with the first overall selection in his fantasy draft, the decision that has doomed the state of his luscious head of hair.

The question is: does this punishment fit Carter’s crime of fantasy football mediocrity? There are mixed opinions on this.

For some, this haircut is long overdue. I spoke to Joseph Catania about Carter’s long hair, and he answered saying, “He looks like Sunshine from Remember the Titans. It’s disgraceful.” Catania is eager for the hair to go, and he told me that once the hair goes, Carter will be “more appealing to my eyes” Joseph thinks the punishment is perfect, and that “everyone has been waiting” for this haircut to happen.

Probably the most vocal critic of Carter’s hair is Joe Royer. He pretty much went on a rant when I asked him about the hair. He said it irritates him whenever he sees it, and questions how he is even allowed out of the house with a head of hair like that.

“It’s gotten to the point where one time I’m just gonna scissor cut it in his sleep or something. I don’t know if he thinks he looks good or what, but I think it’s terrible.” said Royer. Royer said he looks like an  ugly Clay Matthews. Strong words coming from a guy with a wild mane himself.

Another haircut supporter is Paul Moore. Paul said that the haircut is terrible, and it needs to go ASAP, because according to Moore, “He’s starting to look like, bad.” Paul compared Carter’s look to both Sunshine and a blond Jesus.

Some do not want to see the hair go, such as Sam Salamone. Sal told me about how much Carter loves his hair and how hard he has worked to get it to what it is. He “feels bad” that his pride and joy will be stripped from him via a razor.

Personally, I think the long hair looks good on Carter. It’s not messy, it’s not that long (but long), and it looks pretty cool flowing out of the back of 75’s helmet. If it does go, I honestly will be a little upset.

Carter commented on his future look, saying, “I think I’ll look fine without the long hair.” He admits that it will be a big change, but he thinks he will be able to transition smoothly. And before you know it, the hair will be back.

The moral of the story? Don’t stink at fantasy football. Bad things can happen. Good luck to you, Carter.