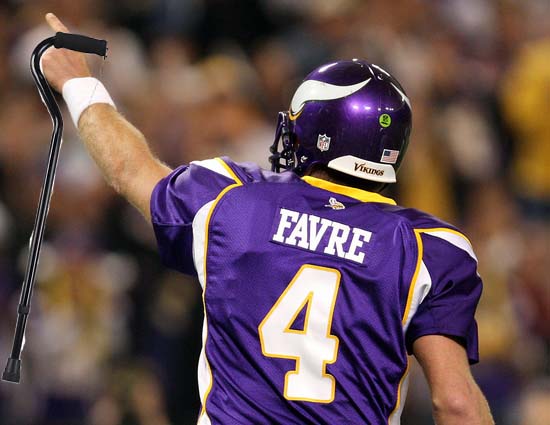 Brett Favre was one of the game’s great quarterbacks. But this 44 year old who had 297 consecutive starts, hasn’t played a down of football since December 2010. Early in his retirement there was always talk about Favre coming back to the league; could that be the case again?

Last week, Sam Bradford the starting quarterback for the St. Louis Rams tore his ACL in a game against Carolina. The Rams who were desperate for a new quarterback to help them finish the season made a desperate call. Favre’s agent received a call from the Rams asking if Brett, the 44 year old quarterback, would consider coming out of retirement. Favre denied the offer saying that he is retired and will never return to the game.

In an ESPN radio interview Favre spoke about the offer.

“It’s flattering, but you know there’s no way I’m going to do that,” said Favre.

He says that the 2010 season was a sign that it was time to officially retire.  I asked Junior Cody Moore what he thought about Favre’s offer, “I think it is crazy to think that a 44 year old man who hasn’t played in three years would even consider getting back in the league. He wouldn’t be able to compete with the young players.”

Brett Favre not only claims that he is too old to play in the NFL again, he also is enjoying the life of a retired 44 year old. He said he is going on trips that as a NFL quarterback he never had time for like Yellowstone, and a trip to the Bahamas. He thinks of it as his family has had to take the back seat for 20 years for his career, now it is their turn to do the things that they have been waiting to do but couldn’t with a father in the NFL.

Although it would have been nice to see Brett Favre come back, it’s not going to happen. Brett Favre is officially retired from the league. St. Louis will have to work with what they have at quarterback. They will start Kellen Clemens, the eight year quarterback out of Oregon. They also signed Brady Quinn and Austin Davis to back up Clemens.