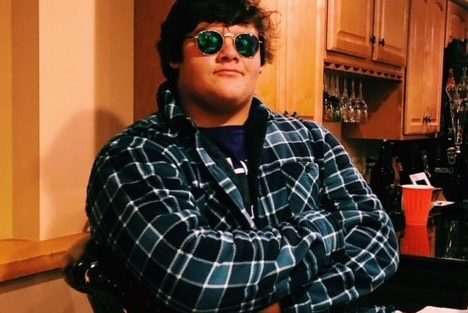 Ginn displaying another one of his blue flannels (vsco)

With all the new trends and styles, it can be hard to keep up with all the unique wardrobes Elder students are pulling off these days.

One that has especially made a name for itself is the re-emergence of flannel. With numerous patterns, colors, and textures, flannel brings a level of comfort and style that’s hard to beat.

Flannel shirts and jackets have populated the school this year seemingly more than ever, largely due to the generosity of Santa this past Christmas. Flannel jackets quite possibly could have been the top “stocking stuffer” this year among Elder students, as the halls have been filled with various checkered patterns.

Aside from the traditional flannel that most have seen and heard about before, flannel jackets have seemed to take over the market. With a thick, cozy fur on the inside and a thick coating on the outside, the flannel jacket provides the consumer with a warm shelter, suitable for all environments.

“I think it’s the all-around comfort the flannel offers. It’s not too hot and it’s not too cold. You can wear it to pretty much anything. A nice dinner flannel or a nice work in the yard flannel, you get the both of best worlds,” stated Steven Seger ’19 when asked why flannel has made such a strong run.

Ironically when asked the same question, junior Matthew Luebbe responded, “I think it has the best of both worlds. It’s got good style and it’s like wearing a blanket around all day.”

Both Luebbe and Seger are avid supporters of the flannel look and enjoy showcasing their style in and out of school.

When asked about his preference between tradtional flannel shirts and jackets, Seger stated that he would much rather have a flannel jacket than shirt. Luebbe also agreed saying, “I’m more of a fan of the jacket because it’s more casual and you can wear it whenever. It keeps me nice and cozy.”

With the popularity of these newly crafted jackets skyrocketing, it has seemed to create a “trickle-down” affect among teens and adults of all ages. Not only does their style attract the eye of the consumer, but the reasonable pricing is down right hard to pass up.

The question is … Where can you get one?

A flannel jacket at kohl’s ranges anywhere from $17-60. LL Bean, Bass Pro Shops, and Macy’s also carry a wide variety with relatively low pricing. If all else fails, you can always turn to Amazon which never disappoints when looking for online shopping deals.

With all that being said, I think the Elder Spirit Store could draw some serious attention with their very own Elder flannel jacket. Although that’s out of my control, I think it’s safe to say it would be a huge hit among the student body. Nothing would typify the Elder spirit more than seeing a bunch of students rocking a purple and black flannel on a Purple Friday.

Enough talk, here’s a look at some of Elder’s finest pulling off some of the best flannels around: