The power of King Fuell

A chat with the man with all the power 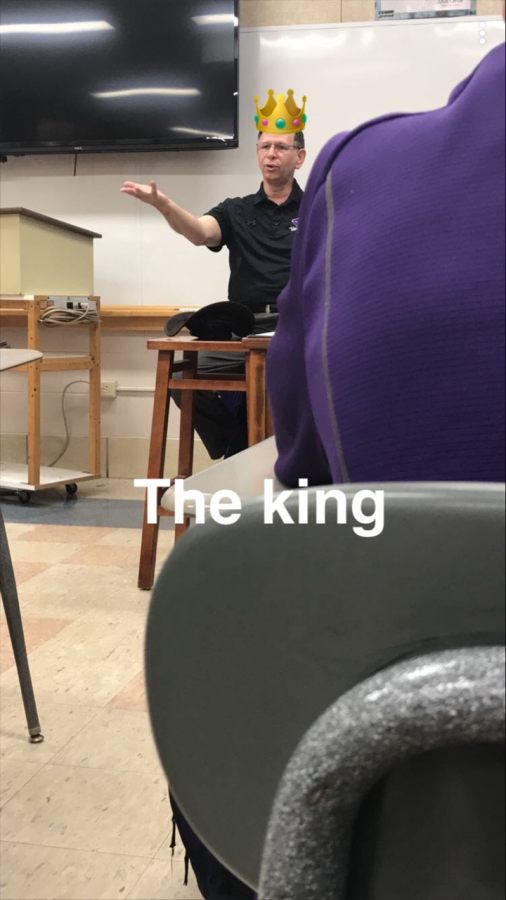 Mr. Fuell in his element

At Elder, there are few things students fear more than getting in trouble with Mr. Fuell or the tech department.

I have been lucky enough to have never been in trouble with my computer, but I have seen classmates get drilled by the King before. Watching as their faces turned red and they were forced to take the long walk to the tech department, I always feared Mr. Fuell.

I sat down with him and discussed what really goes on behind the scenes.

First, we talked about LanSchool. It has always intrigued me, and it does not have a good reputation among the student body. I asked Mr. Fuell what his opinion was on the software. He stated, “To me, it is not always sitting there like big brother looking down at you. It gives the teachers the ability to get you guys content.” For the longest time, I was of the impression that LanSchool allowed teachers to look through your computer’s camera. I know a few classmates who actually taped over their cameras because of this rumor.

Thankfully, Mr. Fuell squashed this. He told me that this was false. He said, “Years ago, with Dyno, there was a feature that allowed people to watch you at home. When we first got Dyno, I wanted that feature to be removed and we did it.”

I also got a chance to discuss the email group chain that broke out a couple years ago. I asked him what happened with this. He explained, “We put all the grade levels in different groups on email chains so administration could send out important messages. Basically, someone got a hold of that chain and was playing back and forth. What this person did not realize was that myself and my network administration get sent every email that goes through all the group chains on email.”

I was a little confused by the part about them getting every email, but I quickly understood when Mr. Fuell added, “We do not get individual email exchanges, but we do receive group emails.” This was a fun story to look back on as Mr. Fuell discussed it with a smile on his face.

As our interview went on, I began to ask about some of the blocked apps on our Wi-Fi. I asked about websites such as ESPN, Netflix, and Snapchat being blocked.

He started by saying, “You know there are a lot of neat things on the internet. There even some things on ESPN that can be educational, and I think YouTube is incredible. I use YouTube all the time.”

This brought me to wonder why some of these websites and apps are still blocked. Mr. Fuell told me something quite interesting about this though. His explanation was, “Apps like these cost a lot of bandwidth, and when many students are on these, you are slowing up the Wi-Fi. Bandwidth is getting cheaper and cheaper and I am reevaluating that right now.”

This response made sense to me, and changed my original thoughts. I always assumed that these were just blocked, so we would not get distracted, and this was really interesting to hear. Though, he did add that, “there is always something more productive for students to do rather than apps like those.” After all, our time here is not justified watching movies on Netflix. We are paying to learn, so we might as well make the most of it.

Furthermore, Mr. Fuell is human too, and he is just like us in that he has pet peeves too. I asked him what were a few things that bother him here at Elder. The first pet peeve he brought up involves backing up files. He gets annoyed by students who do not follow directions for this. I am sure he has dealt with many of these issues in his time here. Backing up his point, he explained how students will need to learn these skills in the future.

He continued by saying that, “In today’s society, these skills are essential.” Speaking of essential skills for life, Mr. Fuell’s second pet peeve involves email etiquette. This is another essential skill for the real world, and even at college. He admitted that some of his emails would not get an A all the time, but making an effort matters to him. I believe this growing epidemic has much to do with our generation’s obsession with texting one another. Indeed, some people treat emails like text messages and it can bother some people, but I digress.

At the end of the day, Mr. Fuell cares about us as students. If that involves some tough love, so be it. I asked him about the punishment policy for playing games and getting in trouble with the tech department.

He stated, “I work closely with Mr. Flaherty on things of that nature. I do not like handing out demerits, but when someone deserves them, I will give some.” It sounds as if Mr. Fuell just wants the Elder student body to make the most of our time here, and that means a lot to me. Mr. Fuell mentioned how he has better things to do than watch what students are doing. He added that, “majority of my day, I spend sitting and working pricing, and constantly trying to see what can be improved on the networking here long term.”

I wrapped up my interview with Mr. Fuell with a question that I have wondered for quite a while. Many students here at Elder like to call Mr. Fuell by the name of King Fuell. I asked him if he was aware and if he liked that name. With a pleasant smile on his face he replied, “I am the king. If I am called the King, then I have no qualms from the things I have been called in the past.”

I believe this was a great way to end an eventful interview with the King.