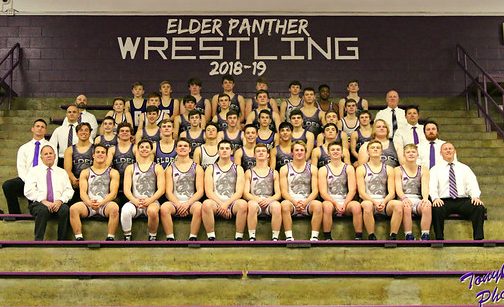 Elder’s 2018-2019 wrestling season was decent even before you consider the new record!

Elder’s varsity wrestling team set a new record for by having the highest score in one game/dual with an (84-0) victory against Oak Hills. There was only one way to get more points added to their score and that was by having an opponent disqualified granting them 1 point. This historical moment was set on Sat. Jan 17 and in the same week Elder won against Oak Hills in all sports of the winter season.

Elder’s varsity wrestling 2018-2019 has a record of 9-4 and their post season starts on Friday March 4, 2019. Wrestling post-season is a time where wrestlers can work hard and try to get wins in the OHSAA District Tournament.

There are a few wrestlers that have a shot at state this year, and maybe there could be a repeat of last year when Antonio McCloud was a state champion. Mr. Oberjohann says, “William Doepker ’20, Jackson Collins ’20, Seth Lambers ‘20, Austin” Belcher ’19, and Jack Roth ‘21 have a good chance of qualifying for state.” Mr. Oberjohann also said that wrestling is mental just as much as it is physical. This is because the wrestler needs to prepare what move and attacks they are going to use and how they are going to pursue the match. Also they have to be mentally tough because it can help them fight through pain during moments of disbelief.

Last years’ post season had a few placers along with the state winner. The placers included Austin Murphy (2nd), William Doepker (8th), Alec Moore-Nash (6th) and Antonio McCloud (1st) (the state champ). Even though many great wrestlers graduated from Elder last year the team came back strong in the regular season to earn their 9-4 record.

But will they be able to repeat last year’s finish in the post-season with this year’s promising line up?