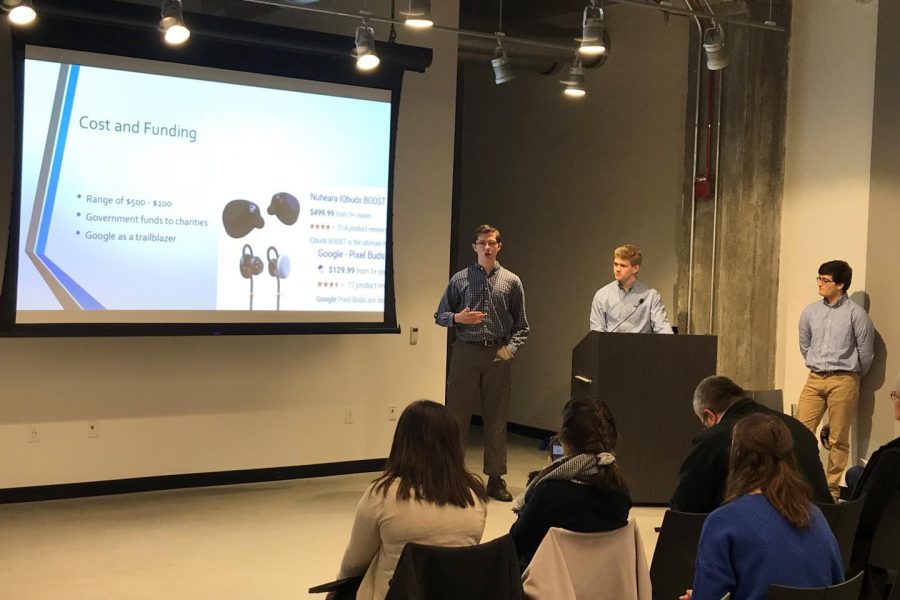 Elder’s Inter Alliance club has been making huge strides the last couple of years.  The Inter Alliance club was created in order to create opportunities for kids interested in the business and technology world to meet important business people and show off some of their skills.  Some students have even been offered internships with some companies for their performance at certain competitions.

First, if you don’t know, the Inter Alliance is actually a city wide event with different schools representing chapters.  I talked to the president of the Elder chapter, AJ Tepe.  He told me that they have been meeting weekly since October have completed some really cool stuff.  At a recent competition, they were awarded second place for their creation of Babbel Fish Ear Buds.

AJ told me, “The point of the ear buds is to translate at the same time as someone is talking to you, similar to a real life google translate.”  For their efforts they were awarded $200 toward their program.   The winners were decided by people in high level positions from Kroger technologies and P&G.

As for any upcoming projects, AJ told me that they have the Techolympics coming up which is a three day event for the whole city organization of Inter Alliance.  They haven’t settled on what they want to do yet, but AJ said, “We want to do something towards app development, but we are still searching for ideas to see exactly what we want to do.”

The club is also working on a web browser that operates on a white list system with a paper device.  The idea is so that people will not get distracted and it keeps you on the task at hand.

I talked to Mr. TJ Evert who is in his third year as the leader as Elder’s Inter Alliance club.  He told me that “anyone that is interested in the field of business should give Inter Alliance a shot, it’s just brainstorming ideas and seeing what we can present.”  This is Mr. Evert’s third year at Elder High School and he is also the leader of the Robotics club, which is completely separate from Inter Alliance.  As well as moderating those clubs he also teaches Computer Science.

After interacting with the Inter Alliance club it is pretty to cool to see kids that you are in class with designing technology that big business are willing to pay money in order to get developed.  The city of Cincinnati’s Inter Alliance has been a great way for young technological minds to get their foot in early with other business leaders and have a head start on their career.

AJ ended our interview by saying, “This club really matters like an actual class to a lot of the guys working on the ideas and it is just really fun to be doing stuff that you love, and people being invested in it.”