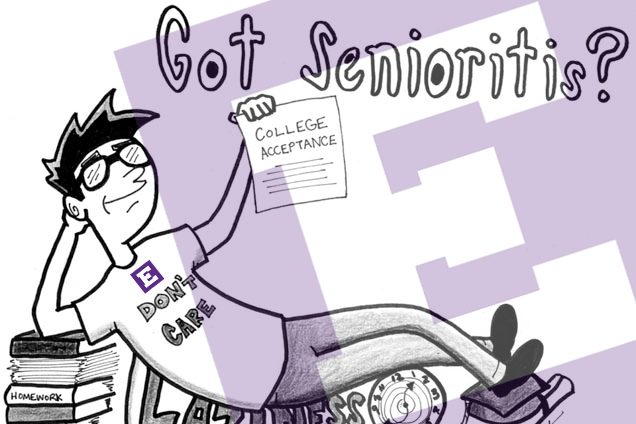 Most seniors have already made college choices, so getting them to do anything in class is rather futile.

First I caught up with Tom Feldman to talk about his afterschool activities. Feldman says he’s a man with many hobbies. He loves collecting zippos knives as well as yo-yos. Tom says now that it’s getting warmer outside he’s looking forward to frisbee golf season. He is now the leading member of Elder’s disc golf team. Tom says he spends many hours at the gym training for his lifeguarding duty. He says that it is his duty to stay physically fit in case there is an emergency and he has to jump in to save a life or multiple lives at the same time.

I then caught up his senior Zeno Perry to talk about his afterschool activities. Zeno says he spends most of his time after school sleeping or playing video games so he can have some interaction with his friends while not at school. When I asked why can’t he just hang out with his friends on the weekend, this is because he works all weekend at Johnny’s where he makes some of the worst food known to man.

After Zeno I moved on to talk to DJ Melillo who lives a pretty interesting afterschool life. He spends his time working on his dirt bike that he’s had for over a year but he’s only road three times. DJ also has an afternoon job now that he has recently started talking to a girl not to be named. DJ has talk to many girls throughout his high school career. DJ says he is learning from his mistakes and has big plans. He also said how he is going “to start working with his daddy at Ingorund systems to pay for the senior trip he plans to go on at the beginning of summer.”

He went on a rant about senior trip saying, “Panama is about to be a dream come true for me, I love the beach and I love swimming also I love eating seafood so I’m super stoked for this trip.”

I caught up with senior Austin Belcher to discuss what he has been up to since his wrestling season concluded. He told me, “I haven’t really been doing anything but relaxing and just eating food. I plan to wrestle next year at Mount St Joseph so soon I will have to start going there for practice and conditioning.”

Belcher then went on to say, “I have to start working soon because I am going to need money to go on my senior trip and also I have a girlfriend who uses a lot of my money.” Austin is a perfect example of someone who is just coasting until the school year lets out.

I also talked to Joey Singler but he is unable to fully enjoy his senior year due to playing volleyball. Joey said, “I love volleyball and the guys on the team so it is enjoyable, but doing nothing does sound nice.” Joey says he looks forward to the summer where all he has to worry about is golf and working to make money for college next year.”

All in all most seniors are just relaxing and not doing much.