Ryan Custer reflects on his time at Elder High School

"There truly isn’t any place like it and people really won’t understand that until they walk through those halls for four years." -Ryan Custer 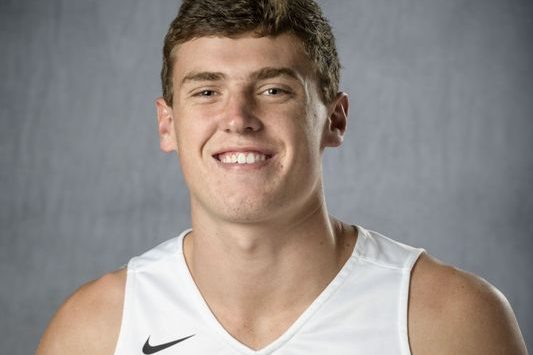 Roughly two years ago, Ryan Custer ’16 was injured at a party in Oxford. He jumped into a makeshift pool, severely injuring his spinal cord. Now, he uses a wheelchair to get around and needs a lot of assistance from his parents and siblings. Ryan is partially paralyzed and visits Good Samaritan Hospital twice a week for rehab.

I enjoyed cheering for Ryan Custer on the sidelines. He was a competitor through and through. He was easy to like and even the underclassman felt welcomed by his genuine smile. He’s the kind of guy you really want to see succeed and consider yourself lucky to know him. None of us knew that we would cheering for him as he fought to recover from a devastating injury.

I recently had the opportunity to talk with Ryan about how the Elder community impacted his life. He explained, “It has had a great impact on me, especially after my injury. The entire Elder community rallied around me at the lowest point in my life and was able to bring hope and encouragement that kept me going.”

He continued by saying, “Obviously, you never realize something like this is going to happen, but when it does, it is unbelievable to have the support system that I had and Elder played a big part in that.”
A huge part of our whole family’s life
Similarly, I asked Ryan’s younger sister McKenzie the same question and her response was, “Elder has remained a huge part of not only Ryan’s, but our whole family’s life. We are always welcomed with open arms and big smiles everywhere we go that’s associated with Elder, and people are always offering words of encouragement and support.”

She graciously continued, “Even if it’s not at an Elder function, people from Elder recognize him and always come up and see how he’s doing. It’s amazing. All the support our family has received from Elder is awesome. Elder High School shows that life isn’t always just about academics and sports, but that life happens and without a doubt, the whole Elder community will be there with you through it all, with whatever it may be.”

She finished by expressing, “We can’t thank everyone enough for helping us get through the most difficult time of our lives, and for helping us still. Ryan’s story may fade, but the journey for Ryan and our family is nowhere near over. And we are forever grateful to have the whole Elder community behind us every day supporting and encouraging us all.”

Notably, McKenzie has been one of Ryan’s biggest supporters throughout his journey. She has been deeply affected by his accident and has been advocating for her brother since the minute she found out.

A daily inspiration
I asked her how Ryan has inspired her throughout the past two years, she told me, “Ryan doesn’t wake up with a smile on his face every day.

But when he comes out of his room every morning, I am immediately inspired. I imagine how hard it is for him, and I am speechless for the way he handles everything. He carries the day with his attitude, his will, and his drive; although you think it would be us providing the comfort to him.”

She further explained herself by saying, “His personality and attitude toward almost everything is so inspiring. He is enjoying life as best as he can, and I know he won’t let this beat him. He has persevered through things his entire life, and this is no different. He is such a tough and hard-nosed kid, and seeing how he has dealt with this from the very beginning is incredible.”

She continued by talking about her relationship with her brother, “I am forever grateful I have Ryan as my brother and best friend, our relationship is so unique and indescribable. Ryan’s accident really re-centered me and put life into perspective. Everything you ever work for can be taken away in one second.”

McKenzie finished by saying, “Ryan is why I work hard – because I know that’s what he did and that’s what he still does today.  I will never give up and I will never stop believing and hoping for what is to come – I know there’s far greater things bound to happen, because Ryan deserves the world.”
A great outlook on life
Likewise I interviewed Ryan’s younger cousin, Luke Masminster ’19. He said, “Ryan has inspired me by his outlook on life. He is in one of the worst situations imaginable yet he has the most positive attitude in our family. He didn’t let his accident change the way he is, and that’s remarkable because if that would have happened to me I don’t think I could have done it.”

He continued by speaking on the impact his older cousin has had in his life, “Ryan has impacted my life because he made me realize that no one is invincible.  I never would have thought that a 6’-7″ D-1 athlete could become paralyzed, especially since that athlete is my cousin. My cousins and I run around and we all thought we were invincible until that happened. It’s really made me take a step back and appreciate all the little things, because when you least expect it, it can all be over.”

Ryan and his recovery story has definitely impacted and inspired all members of the Elder community and beyond. Even as a freshman in high school, I can vividly remember Ryan’s presence on campus and on the court. I could tell that he was someone special and had a bright future ahead of him and after I heard what had happened to him, I was struck dead in my place.
Hard to b3li3ve
Just like everyone else I couldn’t believe what I was hearing, nor did I want too. I immediately thought of Luke and the hell that the rest of his family had to have been going through. I remember having an out of uniform day to raise money for Ryan’s treatment and a few other things that Elder did that year to help out with the costs and to give their full support to the Custer family.

I wondered how Ryan would define Elder’s motto, Altiora, which means to strive for the higher things. According to Ryan, Altiora definitely means more to him now than when he was in high school, “I kind of took it for granted and didn’t really think about the true meaning of it.

But after I got out, I kind of sat back and realized how special Elder was and what that word truly means, especially now.”

He goes on by saying, “The only way for me to go is up and to strive to give myself the best life possible. There is always something better and more for fulfilling that I could strive for in order to live the best life for myself.”

Ryan is a true Panther at heart and is truly grateful for his time walking the halls at 3900 Vincent Avenue. I asked him about his time spent at Elder and about the relationships that he had made there. According to Ryan there are so many things that he loved about going to Elder, “There truly isn’t any place like it and people really won’t understand that until they walk through those halls for four years. Playing in front of those fans are something that I will never forget.”

“Although I have a lot of the same friends that I’ve had since grade school, those relationships became stronger throughout my time at Elder and I even met other friends that I will have for the rest of my life.” I have observed Ryan and his friends hanging out at his house on multiple occasions. Swimming in the pool or shooting basketball in the drive way. They are one of his strongest support systems and continue to be there for Ryan, every day.
Sound advice

I wondered about what advice Ryan would give to the seniors who are getting ready for their graduation from Elder High School and if there was any words of encouragement he would say to them if he could. He reluctantly expressed his words of wisdom, “I know it sounds cliché, but don’t take it for granted. Do as many things as you possibly can before you graduate because a year from now, you are going to look back and wish you had just one more game, one more Purple Friday, one more Mr. Tierney prayer. Just one more day.”

Ryan finished the interview by saying, “I would give anything to go back and start over and have another four years. Whether you believe it or not, you are going to miss it. I am so thankful I had the opportunity to go Elder High School.”