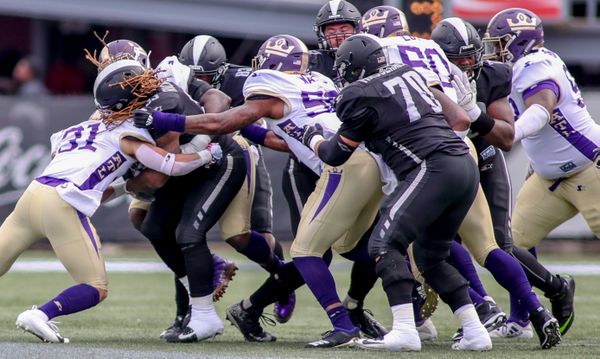 The Alliance of american Football will no longer continue operations.

News broke on Monday that after just eight weeks of game action. The AAF has officially shut down its operations for good.  The AAF was created as a way to give football fans another option in the off season and experiment with different rule changes that would make the game more exciting to watch.

The AAF (Alliance of American Football) was first brought to the market by Charles Ebersol and Bill Polian and consisted of eight teams throughout the country.  The AAF started play on February 19, 2019 just six days after the Super Bowl.  The league originally impressed with it’s new rule changes that drew more eyes to the TV.

Unfortunately, not a lot of people wanted to watch the AAF and Ebersol announced he didn’t have the money to pay the players, cited a 27 million loss and put it up for sale.  The league’s co-founder Bill Polian stayed on and Ebersol sold his share in the league to Tom Dundon who became the league’s majority owner.

A few more weeks passed and the league struggled to gain audience viewers and on April 2nd the league owner Tom Dundon suspended all football operations for good.  The AAF was just two weeks out from starting the playoffs.  AAF players found out through the internet as the league never informed its players.

A couple days later, the AAF announced that its players were free to sign with NFL teams, but the NFL warned teams to not sign any AAF players, because their contracts with the AAF had not been settled yet and they wanted to avoid any legal action.  However, the AAF finally settled their dispute with their players and the NFL announced all teams were free to sign players from the Alliance of American Football.

Despite lack of viewership, the reviews of the AAF were actually pretty good and the product they put out was quality football.  Over 40 AAF players have already signed with NFL teams (most likely the practice squad).  There are disputes about why the league shutdown, and Dundon claims he lost millions of dollars, but some people aren’t buying that story.  As mentioned before, the AAF had some interesting rule changes that we could one day see in the NFL.  Here were some of the favorite rule changes.
NO MORE ONSIDE KICKS
The AAF did not use any punters or kickers, so the league decided to look into what they could do, to recreate the onside kick.  After doing some research, the AAF found that converting an onside kick was the same conversion rate as converting on a 4th & 12. This resulting in the “Onside Conversion” being born, where the team will get a chance to convert from their own 28 yard line on a 4th & 12 in order to keep the ball in their possession.
NO TV Timeouts
The only commercial breaks are at the end of quarters and when a team calls a timeout.  The AAF said this reduced game time from 180 minutes in the NFL to just 120 minutes (two hours).
Sky Judge
The Sky Judge acts as another referee in the AAF.  The Sky Judge sits in the press box and can instantly correct obvious and egregious officiating errors.  The good things about this is it doesn’t waste time on replay.  The Sky Judge simply buzzes down and immediately corrects the call. 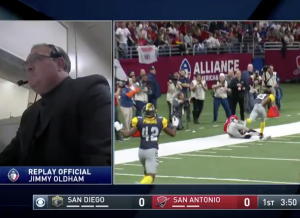 Limited Pass Rush
No more than five players can rush the quarterback on passing plays.  This makes more room for flashy up tempo offenses which is what fans want.  There will be a 15 yard penalty for “illegal defense” if a team does rush more than five players.  Play action or run-pass option would be the lone exception to this rule.