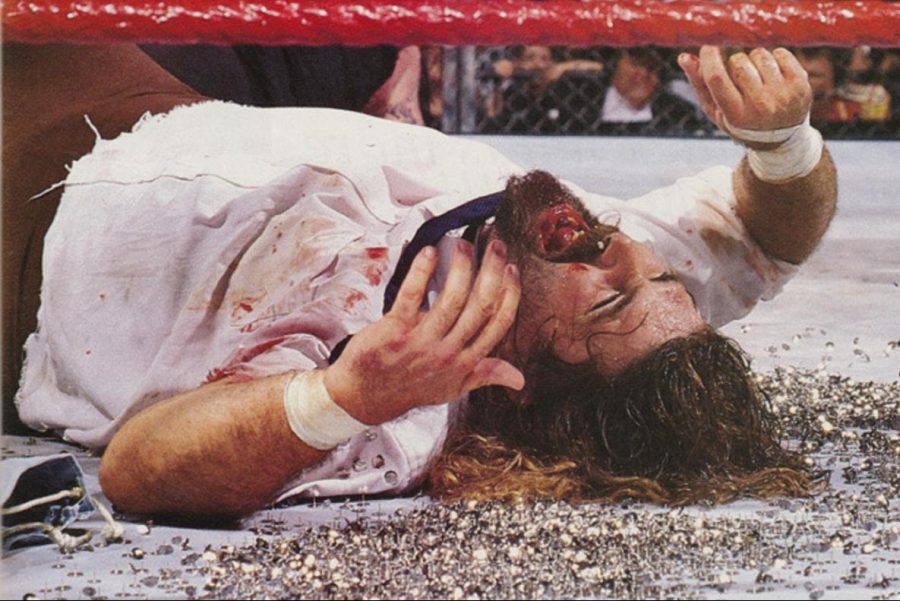 Mick Foley after getting choke slammed onto tacks

1. Mick Foley
Without a doubt, Mick Foley or better known as Cactus Jack or Man Kind is the craziest wrestler of all time. Mick Foley has been thrown from a 20 foot steel cage in WWE’s hell in a cell match against the Undertaker in 1998. From this fall he dislocated his shoulder and could not get up. They brought out a stretcher and put him on it.

Then Mick Foley got off it and climbed back up into the cell to fight The Undertaker. The Undertaker picked him up and choked slammed it through cage onto the ring! He could have broken his neck doing this and had to land a certain way other wise it would of broken his neck. Mick’s tooth went through his lip into his nose from this fall. He still got up and then was body slammed onto a pile of tacks! Mick Foley is the craziest wrestler ever not only doing a match with this many stunts one time but multiple times. He continues to have matches like these. From all this he still gets up and walks out of the ring. Any dangerous match named in wrestling history Mick Foley has competed in it.
2. Jeff Hardy

Jeff Hardy, brother of Matt Hardy, is a specialist of ladder jumps and ladder matches. His finisher is a swan ton dive off the top ropes. He swan ton jumped onto Randy Orton from thirty feet up in the air off the entrance stage. He also performed a twist of fate on Edge as he tried to spear him. Edge tried to perform his signature move a Spear but from a 12 foot ladder. Jeff Hardy on another 12 foot ladder reversed it mid air and hit him with a twist of fate from 12 feet in the air! Jeff Hardy is also known for his flips. He did a backwards 360 flip from a steel cage onto Umaga. He was 20 feet in the air when he did this! The most common jump he performs is the ladder jump onto another wrestler laying either on another ladder or table. He has performed this stunt numerous of times. He will swan ton dive onto them or leg drop them through tables or ladders.
3. Suicide

Suicide performs some of the most dangerous jumps ever. He would jump from the 20 foot steel cage onto people outside and inside the ring! Suicide, in TNA’s or impact wrestling bound for glory in 2009 ultimate X match, jumped from outside the ring up to the top ropes, used that like a trampoline and then jumped on the X ropes where the belt was. As Homicide was reaching for the belt, Suicide body slammed him from the X cables that were 15 feet above the ring. Then Suicide drop kicked Red off of the cables! Again falling another 15 feet!
4. D-Von
D-Von’s special move was jumping from high up and head butting a man’s private area while saying “Whats UP” and Bubba Ray holding the other man down. D-Von and Bubba did a lot of the same stunts. They would always be throwing people off ladders or getting thrown off them. Hitting or getting hit with weapons in the ring, and always throwing or getting thrown through tables. The reason D-Von is 4 and not 5 like Bubba is he was hanging from the title belts 20 feet above the ring with Jeff Hardy as Jeff kicked him off falling all the way down to the ring

on his back. This is what puts him above Bubba Ray as a more crazy wrestler.
5. Bubba Ray
Bubba Ray was known for slamming people through tables. How ever he would Body slam people off ladders and get thrown off stages too. Bubba Ray would climb up ladders, fight an opponent and then get them in a full nelson and body slam them off the ladders. Also Bubba Ray was on a ladder while it was falling over and fell onto a table which he broke outside the ring. It was a long drop onto those tables.
6. Edge

Edge was known for his ultimate spear. Edge speared Jeff Hardy off the Hanging belts from a ladder that was 15 feet above the ring. Edge also speared the one and only Mick Foley through a flaming table! He performed in many TLC matches and Hell in a Cell and Extreme rules matches. Edge is has also performed in a barbed wire match. Edge faced Mick Foley in a WWE barbed wire match where Edge was cut very badly.
7. The Undertaker

The Undertaker never performed the craziest stunts but was just crazy in general. He would perform in every match like Mick Foley but didn’t do that many crazy stunts. He would wrestler in inferno matches where the winner has to set his opponent on fire. He also was the master of mind games scaring the life out of his opponents.
8. Christian

Christian is not as crazy as Edge, but performed in many of the TLC matches and Extreme rules with Edge. Christian was thrown off ladders and put through tables and vice versa but what is really awesome is he was power bombed through a glass table by Bubba Ray.
9. Ric Flair

Ric Flair was crazy in general. Never performed many outrageous crazy stunts like a lot of people. He just wrestled till he was really old and still getting thrown off ladders and off the top ropes and getting hit by weapons in the ring. Ric Flair wrestled into his 70’s!
10. Matt Hardy

Matt Hardy along with Jeff would jump off ladders and also through tables. He never did this as much as Jeff did which is why he is number 10. Matt Hardy would get pushed off ladders a lot. He mostly performed the twist of fate off the ladders like Jeff but Jeff could perform multiple moves from the ladders as Matt can only perform very few.