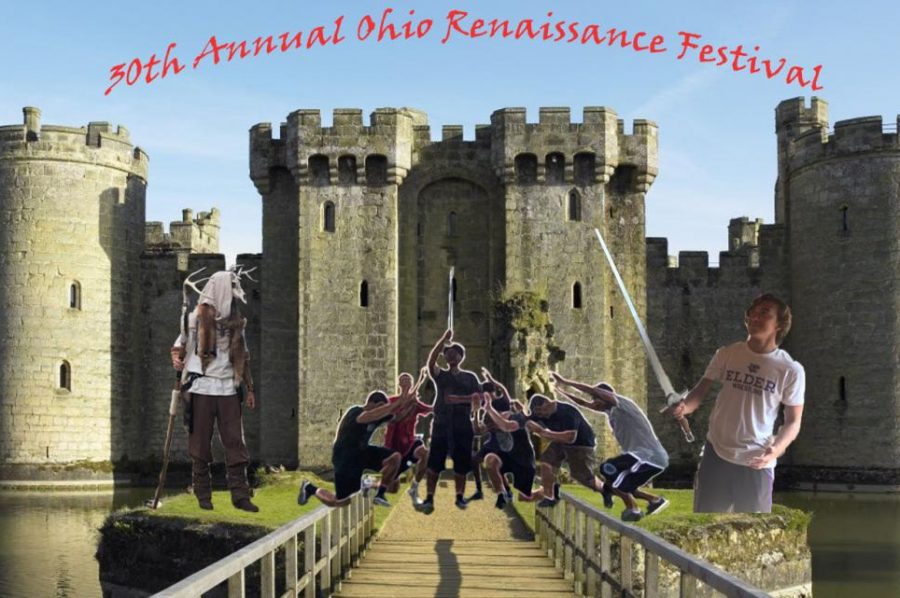 On its opening weekend, I made the trip up to Waynesville's own Ohio Renaissance Festival to explore what it has been providing to fans for thirty years.

Celebrating its 30th anniversary, Waynesville’s Renaissance festival continues to provide visitors with the middle-ages content they long for. The festival runs from August 31st to October 27th every year. Making the trip on the opening weekend, I had the chance to experience the celebration myself.

Sitting down with medieval guru, Kyle Gutzwiller ’20, I got to ask him all about his take on our first trip to Waynesville. When I asked Kyle what the festival is all about, he first responded with: “Copious violence, meat, and chicks in elvish cosplay.” Kyle then went on to explain that “the festival is a place where people are allowed to be weird, and they definitely take full advantage of that…no matter how weird you feel being there, someone else looks and acts even more strange”.

Kyle said that all visitors, however, are relatively civil and everyone is respectful no matter how invested you are. Kyle did not dress up for his first trip to Waynesville, but he plans to do so if he returns in the following years. Overall, Kyle and I agreed that the festival is definitely a place for families, but that anyone could have a great time.

I then asked Kyle to elaborate on why the festival is so attractive to people from so many different walks of life. He explained that the festival offers a lot of live performances and reenactments, yet also many craft stores and weaponry shops. “Basically, there is something there for everyone.” Kyle’s favorite event, however, is by far is the joust. A joust, for those who aren’t nerds, is a competition between two knights in which each combatant displays his or her skill with weapons on horseback. Kyle described the joust as “an epic clash with gleaming armor and magnificent, thundering steeds”. I saw the joust myself and I can confirm that it is definitely the most exciting event that the festival offers. With giant war-horses galloping through mud and noble knights dressed in full armor, the joust is truly a must-see experience.

Later, I asked Kyle about which food he preferred to grub on while returning to his Anglo-Saxon roots. Kyle said: “The turkey leg is an iconic piece; it was juicy, large, and great with barbecue sauce. The turkey leg made me feel like I was participating in the festival, and I finished it in about two minutes and forty-five seconds”. Personally, I did not care for the turkey leg at all. I thought that it was greasy and bland. However, I will admit that it made me feel immersed in my surroundings: chomping on a giant leg of broiled meat provided a very primal sensation. Even if you don’t like the meat, there are plenty of other options that are sure to fill your stomach to its full potential, such as the hollow pineapple rind filled entirely with pineapple flavored ice cream. Both Kyle and Nate Ficker, who also traveled with us to Waynesville, especially enjoyed this frozen fruit.

Too much for one visit

To wrap up our interview, I asked Kyle: “What makes you want to go back?” Kyle immediately explained that the festival offers so much more than what can be experienced in one outing: “I want to see a sword fight in person, visit the rest of the shops, and see more of the live performances.” He also said that the booth where you can throw tomatoes at a grown man’s face will also be on his itinerary. Kyle also plans to go back with more money saved up so that he can bring home some merchandise, such as a wooden mug and possibly a knightly sword (specifically from late 1500’s Europe).

The Ohio Renaissance Festival may be something you have never heard of, yet it obviously has more to offer than what most of us expect. I enjoyed every second of being part of this festival, and I would recommend it to anyone who has the time to make the journey to Waynesville.

It definitely does its job as a Renaissance fair in getting visitors to feel like they are part of the medieval setting, but it also includes modern elements and certainly makes visitors feel welcome. If you have the time before Halloween, I encourage you to make a trip to this once-a-year event and see the surplus of unique activities it has to offer.