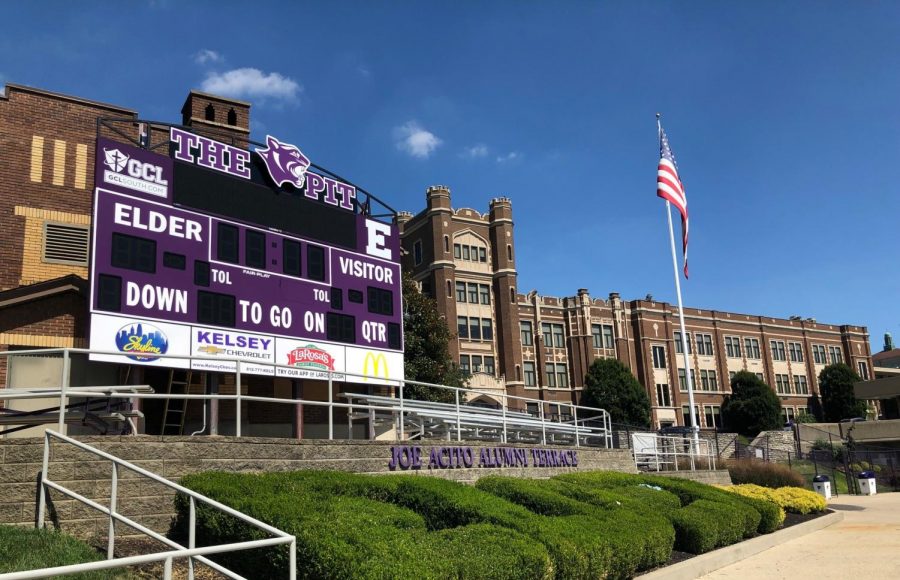 When you walk (or run) into the Pit this year, you’ll notice the brandnew scoreboard that sits in front of the Donohoe Center. After years of an old scoreboard with lights that didn’t work, Elder has finally made the switch to a new and improved scoreboard.

I have seen the board in action prior to our first home game, and it is luxurious to actually be able to read what is up on the board. The lights are very clear, and most importantly, all of them work unlike the previous scoreboard.

I talked to Coach Espelage about the scoreboard, and he told me that they were given the “OK” around last February or March. The old scoreboard was on its last life, so it was time for an upgrade.

Elder met with three scoreboard companies to start off the project, but narrowed it down to two pretty fast. Espelage told me that the first company’s design was an all jumbotron screen, which he wanted to avoid.

The two companies presented their two designs, and the majority favored the design from Griffin Sports Equipment, which is the current scoreboard. “I think me and Matthew Luebbe were the only ones who wanted to go with the other company,” said Espelage, but, they went with the present design anyway.

They then got serious with two other companies, who could offer both a traditional scoreboard along with “modest video board capabilities” according to Coach Espelage. Along with the scoreboard, Elder received locker room clocks that link to the scoreboard and on-field play clocks as well.

It looks like your average high school scoreboard for the most part. Elder purple, slots for the score, time, timeouts, possession, and all the stuff you need for football games. Standard LED lights are used, a tremendous improvement from the old scoreboard where half of them didn’t turn on while the other half you couldn’t even see.

Senior Zach Dugan likes the style of the new scoreboard. “It still has that old look and the scoreboard fits in with the history of the Pit,” said Dugs. The old style is something that both Elder students and Elder alumni can both appreciate.

Espy told me that they didn’t go with the all jumbotron screen because it did not fit the budget, and he wanted to keep the old style look of the Pit in place. It is an 81-year-old stadium, so why not embrace the old style feeling of the stadium.

Just like the former scoreboard with the panther sitting at the top, the very top of the scoreboard has an arch looking shape with a nice graphic of the Panther head and “The Pit” placed on the sides of the Panther.

As to what happened with Panther on the old board remains a mystery.

Right underneath this arch is a video screen, where video can be placed or special effects of the board can be displayed.

The video screen does not have to be on and running all the time, but it will certainly be flashing on Friday nights. “The video capabilities are something we’ll learn about every day,” said Espelage.

Some of the special effects are useful to the scoreboard, such as an image that says, “Touchdown!” However, some effects are completely irrelevant to what this scoreboard is to be used for, such as “Amber Alert” or “Be Mine”.

However, Espelage looks at this as a great opportunity for advertisements. Since the new board runs audio and is capable of running videos on the screen for a controlled period of time, he can reach out to sponsors and persuade them to make a video ad to run on the scoreboard.

Espy told me that we will not be fooling around with any type of instant replay, mainly for concerns of outrage in the stands, but he has explored the option of showing first half highlights on the board, if possible.

Also, students at Elder have also put together some video work that is to be put on the scoreboard. “My current Sports Management class is designing and putting videos in,” said Espelage. Players have also done some video shooting in front of a green screen, courtesy of The Purple Quill’s own, Adam Duwel and Jack Langen.

Ultimately, all of the video and stuff lies in the hands of Elder’s own, Mr. Schlomer, who is the man in charge of the video board. No pressure.

“I look forward to what we can have it do,” were Espy’s closing remarks on the scoreboard. Hopefully we’ll be seeing big numbers in the Panthers’ column of the scoreboard for years to come.